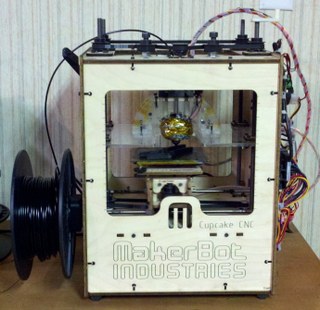 
Last week I introduced everyone to the concept of using 3D printing in the aquarium hobby. I gave a general overview of 3D printing and showed how it is useful for people to have a 3D printer at their disposal. While it is not for everyone, 3D printing can provide solutions to everyday situations and in this installment I will show you how a person can use a Makerbot or Reprap 3D printer to print useful things for coral fragging.

All of these items (minus the glue of course) are available for download from Thingiverse.com. Based on the available models, here is what I would recommend as starting points:

Rubber bands and cyanoacrylate glue are pretty straight forward. One can find rubber bands at any local store as well as cyanoacrylate gel. A number of aquarium suppliers also sell larger containers of cyanoacrylate gel such as EcoTech Marine or Two Little Fishies and these will last you quite a while unless you are fragging a lot of coral. Cyanoacrylate will stick very well to the frag plugs that are used in this example.

Currently there are three coral frag plugs available on Thingiverse – two that I designed and one that the member “engineglue” designed. All three of these are designed to use a piece of 14 mm eggcrate to hold the mounted coral frags in place.

The first frag plug that I designed snaps into place when pushed into one of the square eggcrate openings. It features knurled edges to aid in gripping the top when wet, a textured top to aid with gluing, and holes in the top where one could ziptie an identification tag. The groove in the base makes it convenient if you want to use rubber bands instead.

The second one has the same features as the first one but also has a removable base. This is very convenient because when the coral has grown out to the point that it is ready to take its place in your display, you can simply pop the base off and stick the top in place. The base is reusable with new printed tops. The frag plug also features “tabs” on the post to lock it into the eggcrate.

The third one (by “engineglue”) is an ultra-minimalist design which reduces print time and the amount of plastic one would use to print it. It has a small hole in the top for glue and the pegs slip into a 14 mm eggcrate hole.

I would select the frag plugs I want and then print out however many I need using PLA (polylactic acid which is corn-based) instead of ABS (the stuff Legos are made from) as PLA is more dense than ABS and will sink in saltwater.

Next, I would print out tweezers, pliers, or even a hemostat for handling the coral. This is optional, but might prove useful in some applications. There are a number of great options on Thingiverse. For tweezers, I chose to use the ones by “hoeken” which measure approximately 4 inches in length and are nice and springy. There are two models of pliers that I like: one is by “Starno” and the other is by “russrobot”. Starno’s is somewhat squat and has nice finger holes in the handle. Russrobot’s is more of a needlenose kind of pliers. “CaptainKirk” has a nice hemostat design in case you want to clamp onto something and hold it quite a while. I would choose to print these in ABS to make them more “springy” as PLA is more brittle.

Two different types of pliers (top) and a 4 inch tweezers that were printed out on the Makerbot.

As mentioned above, all three of the available coral frag plugs on Thingiverse use 14 mm eggcrate so I will use that for this project. Eggcrate is nice as it is inexpensive and has square holes just the right size for most frag plugs on the market. Cut out a 4” x 10” section and set it aside. Next, print out two Suction cup eggcrate brackets and fit them onto the ends of the eggcrate. Finally, salvage two suction cups from an old MaxiJet powerhead and push fit them into place in the holes in the brackets.

Printed brackets (left), Eggcrate and brackets (right). Print out two of them and snap them into place on each end.

That’s it! You now have all the tools you need for fragging your corals. If you run out of coral frag plugs at any time during your fragging session, simply fire up your 3D printer and print out another dozen or so.

If you had a 3D printer, what would you print?

Andrew over at the Makerbot blog just gave us a nice shout-out about this series. 🙂