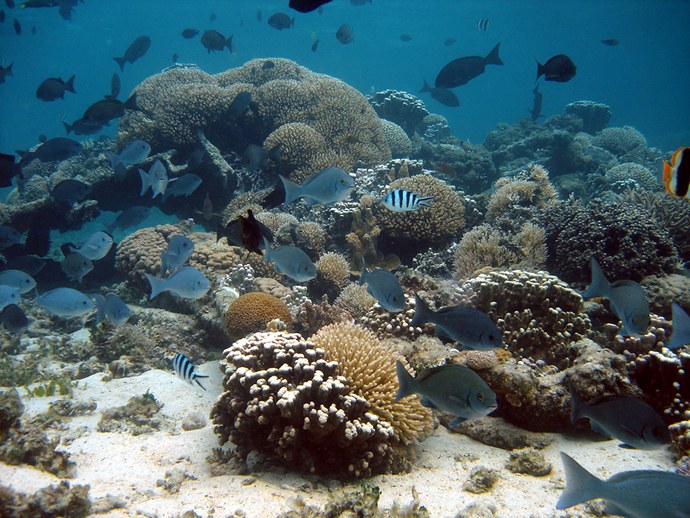 
Some corals are lucky in that they can actually unbury themselves when covered with sediment. Fungiid corals, for example, can actively shed sediment buildup by inflating and deflating repeatedly . Other corals, like Pocillopora spp., house symbiotic shrimps and crabs that will help remove sediment buildup as well.

If the coral is not lucky enough to have the ability to either shed sediment through inflation or by symbionts, it’s in for a world of hurt — especially if it grows on a reef close to populated areas where river or terrestrial runoff can foul the sediment with sewage and other organic material.

In their paper “Mechanisms of damage to corals exposed to sedimentation” researchers Miriam Weber, Dirk de Beer, et.al. propose that coral that are covered with sediment that is organic rich will much more quickly succumb to tissue loss and death than coral that are situated far away from populated areas.

Fragments of the coral M. peltiformis covered with sediment that was enriched with organic carbon (A) and the same coral fragments after the sediment was removed (B).

Their research showed that when covered with organic rich sediment, corals would succumb in as little as one day. Corals that were covered with sediment that contained no organic material were shown to last six days with no lasting effect.  Weber and others postulated that the organic rich sediments covering the coral contained higher bacteria levels and these bacteria used up the surrounding oxygen during metabolism. Metabolism of the organic material in the sediment then caused a local pH drop. This pH drop in combination with oxygen poor conditions and hydrogen sulfide buildup hit the coral with a “triple-whammy” which caused localized tissue death and eventual coral death as well.

The team of researchers found out the crucial steps:

Phase 1: When a two millimetre layer of sediment enriched with organic compounds covers the corals, the algae will stop photosynthesis, as the light is blocked.

Phase 2: If the sediments are organically enriched, then digestion of the organic material by microbial activity reduces oxygen concentrations underneath the sediment film to zero. Other microbes take over digesting larger carbon compounds via fermentation and hydrolysis thereby lowering the pH.

Phase 3: Lack of oxygen and acidic conditions harm small areas of coral tissue irreversibly. The dead material is digested by microbes producing hydrogen sulfide, a  compound that is highly toxic for the remaining corals. The process gains momentum and the remainder of the sediment-covered coral surface is killed in less than 24 hours.

Miriam Weber: “First we thought that the toxic hydrogen sulfide is the first killer, but after intensive studies in the lab and mathematical modeling we could demonstrate that the organic enrichment is the proximal cause, as it leads to lack of oxygen and acidification, kicking the corals out of their natural balance. Hydrogen sulfide just speeds up the spreading of the damage. We were amazed that a mere 1% organic matter in the sediments is enough to trigger this process. The extreme effect of the combination of oxygen depletion and acidifation are of importance, keeping in mind the increasing acidification of the oceans. If we want to stop this destruction we need some political sanctions to protect coral reefs.”

Katharina Fabricius from the AIMS adds: “This study has documented for the first time the mechanisms why those sediments that are enriched with nutrients and organic matter will damage coral reefs, while nutrient-poor sediments that are resuspended from the seafloor by winds and waves have little effect on reef health. Better land management practices are needed to minimise the loss of top soil and nutrients from the land so that they are not being washed into the coastal sea.”

The research demonstrates populated areas around coral reefs need to maintain constant vigilance when it comes to minimizing pollution that can make it into the oceans as it can have serious consequences on coral.