How to determine the sex of Banggai cardinalfish 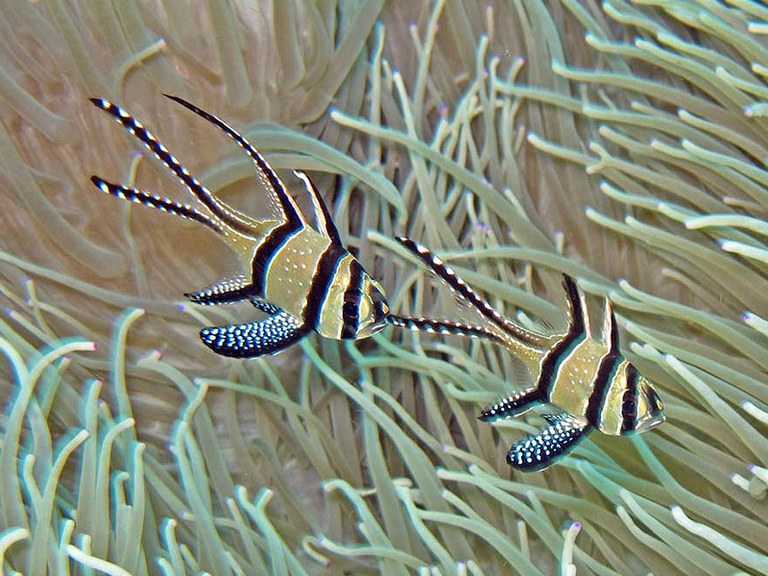 
An interesting thread popped up on the Marine Breeding Initiative’s website this week: How to sex Banggai Cardinals (vent method). I thought this thread rather timely given the recent Kickstarter project, Banggai Rescue, in which a team of scientists will survey Banggai populations and learn more about this fish species.

This fish is considered by some to be the “guppy” of the saltwater breeding realm as the fish are born live and have shown the ability to start feeding on non-live foods like Top Dressed Otohime from APBreed. However, obtaining a pair is problematic as many people have trouble determining which fish is male and female. Mindy van Leur (username “EasterEggs” on the Marine Breeding Initiative’s breeding forums) snapped a couple of great photos of male and female Banggais and gave instructions on how to determine their sex, which is great information for people trying to form pairs from larger groups of these fish. These are the best photos I have seen and has really cleared up what to look for when attempting to form a mated pair.

According to her method, she has a 100% success rate pairing fish. The thing stressed most is the fish need fed well before attempting to determine their gender as the fish need very plump bellies otherwise the physical characteristics are not easily visible.

After feeding them well, look between the two pelvic / ventral fins and the lone anal fin. Either one or two white “vents,” shaped like a cone or triangle, will extend away from the body. These vents are very small and are hard to discern without a plump belly.  Males have two vents and females have only one. You may need to look for a bit but Mindy, backed up by a number of other MBI members, says this method has consistently produced pairs. One caveat is that females close to spawning may exhibit what looks like two vents due to the distention of the belly in that area making them look like males.

Here is what these vents look like in males and females:

Mindy and other have stated that following this method, they have a 100% success rate forming pairs. This method may not work very well at the LFS unless the store has fattened them prior to your evaluation.

If you are a Banggai breeder, what are your “tricks of the trade” for forming pairs? Do you follow Mindy’s method or do you have an alternative method?