How To Improve Polyp Extensions (PE) In Acropora Corals? 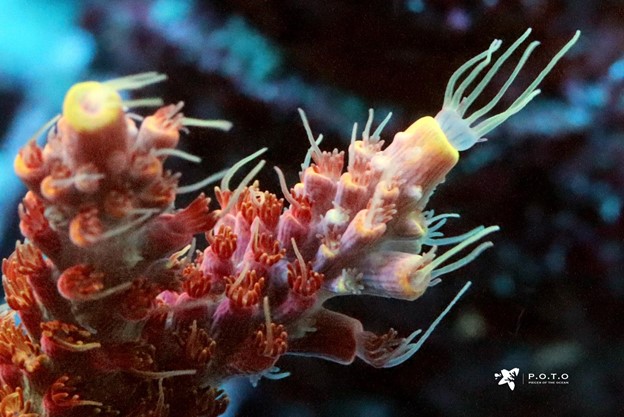 Polyp extension (PE) in Acropora corals (acros) is often affected by pests, fish nipping, the stability of water parameters, and adequate flow and lighting. In addition, adding nutrients and the right food can elicit a feeding response that is manifested in PE. However, for consistent PE, the aforementioned conditions should be addressed.

When it comes to SPS (small polyp stony) corals, it is not only the beautiful colors we love, but also the tentacles of each polyp that capture our hearts.

As a natural behavior in the wild, to avoid fish predation, many corals tend to extend their polyps to feed only at night, rather than during the day when aggressive fish might nip at them. But in a captive environment, where predation is generally absent, we should expect to see better PE during the day. 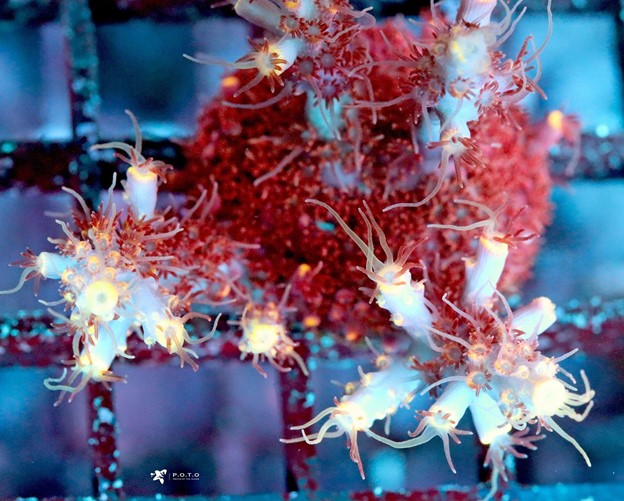 Full extension of axial polyps are seen in this photo taken one hour before lights come on.

If you ever flash a light into your tank at night, you will find behaviors that you don’t see during the day. Among them, the axial polyps, or the new growth polyps, are fully extended at night, some looking almost translucent and colorless. Radial polyps – or more aged polyps – tend to extend just as much during day time, and show close to no difference at night. This is usually a good indication of a happy coral.

Why Is PE Important?

Polyp tentacles are used to capture prey. A coral with its tentacles extended is a coral that is trying to feed. Corals that do not extend their polyps are generally bothered, with some exceptions. If you see no PE during both day and night within a 24-hour cycle, it is worth investigating if something is bothering the coral, whether it’s mechanical (fish nipping), biological (pest), or chemical (unstable water parameters).

Regardless of daytime PE, nocturnal axial PE is one of the best indicators of health in acropora corals. Axial polyps are typically the site of rapid growth and have lighter coloration due to a lower concentration of symbiont algae (i.e. Symbiodinium or zooxanthellae) [2, 36–40]. In contrast, radial polyps are generally smaller and have darker pigmentation corresponding to higher symbiont densities. (Elizabeth M Hemond, et al 2014) 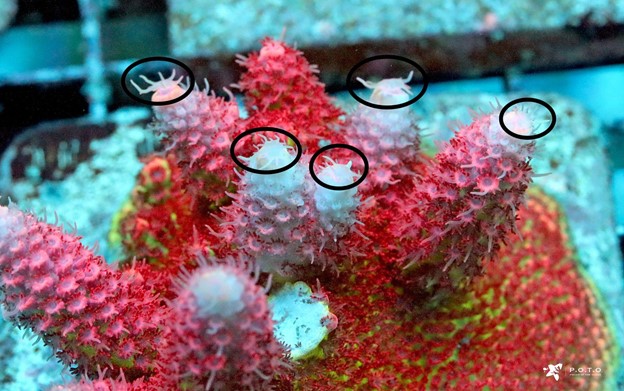 Axial polyps located in sites of active growth which are hidden during day time, are seen circled in the photo above.

PE not only adds movement to corals that would otherwise be a stationary structure, but the corals extend polyps to capture light (photosynthesis) for their zooxanthellae and capture food (heterotrophy) in the water. The more the polyps can extend, the more they can feed. If a coral cannot extend its polyps, it cannot feed.

Parasites and pests are the most common reason for lacking PE in Acropora corals. For the best PE in Acropora corals, it is highly recommended to thoroughly inspect and quarantine your corals before adding them into the aquarium. Always dip your corals with a solution designed to target the common coral pests, and always remove the frag plug or hard substrate base that comes with your coral.
The two most common pests that can affect PE in acros are Red Bugs (Tegastes acroporanus) and Acropora Eating Flatworms (Amakusaplana acroporae). Both slowly stress and can even cause mortal damage to acros.

These tiny crustaceans are a nuisance in many aquariums, however, they are easily eradicated.

You can never go wrong treating the water for Red Bugs once a week for a month after adding new corals into your reef aquarium. Interceptor (containing Milbemycin oxime) is commonly used against Red Bug outbreaks, however, if you have invertebrates in your tank, it is best to remove the infected Acropora coral and treat it in a quarantine tank.

An AEFW infestation is every reefer’s dread and is not easy to treat. Research in 2019 looked at the life cycle of AEFW and how to eradicate them in aquariums. The moment you spot the worms and/or eggs, you will need to do a coral dip. A minimum of 3 weeks of treatment is recommended, as some eggs may not have hatched inside of that time frame. The three week treatment period hopefully catches the AEFW in their adult stage while also allowing some coral recovery.

AEFW is also difficult to detect; you usually cannot see AEFW until there are feeding scars left behind. Therefore, it doesn’t make a difference if you buy a single coral frag or a colony, both can become infected by these troublesome worms!

Future research hopes to look at the genome sequence of AEFW to create drug target treatments along with mechanical removal, which has been successful in other parasitic infestations.

Some aquarium hobbyists have found success physically blasting them off the corals with a turkey baster or a small pump and allowing fish in the reef aquarium to consume them.

A recent experiment has shown that sixline wrasses will actively consume AEFW while peppermint shrimps will consume some while also eating the eggs. This is a great way to keep AEFW in check but do keep in mind that it is definitely not a be-all and end-all solution.

Avoid fish, especially those that are obligate corallivores such as many types of butterfly fish, that take acro polyps as a part of their natural diet.

Fish known to nip at acros are:

● Dwarf Angels
● Almost all butterfly fish species in the hobby
● Filefish
● Some species of blennies
● Even some tangs can acquire a taste for coral polyps!

Maintaining good water quality is vital for PE in Acropora corals, as you do not want to starve your corals of nutrients or make conditions unlivable. Salinity, PH, nitrate, magnesium, phosphate, and calcium are all important for PE in acros.

When phosphate and/or nitrate levels are too high, Acropora corals tend to retract their polyps.

Alkalinity at a constant level is also important for Acropora corals. Any fluctuations with alkalinity over a short period can become extremely problematic, and can be manifested in a change in PE.

DNA/Natural Behavior Of The Coral

Some corals just aren’t meant to have long polyps, while others are characterized by it. So some acros just don’t have much noticeable PE, such as many of the smooth-skin type, as opposed to millis and tenuis. Even so, the night time behavior of extended axial polyps still holds true. 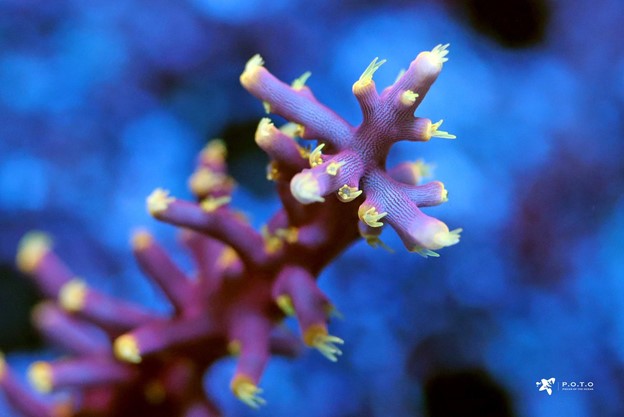 You always want to provide a strong and random flow that helps deliver food and nutrients to Acropora corals. However, do not blast them with a constant direct flow all the time as this can damage the polyps and tissues.

Another issue is too little flow. Not enough water flow allows excess algae and/or detritus to build up on the coral’s polyps, causing them to retract.

SPS corals with low light requirements do not do well under intense lighting, and corals that require intense lighting, will not cope well in poor lighting. Acropora corals placed too close to lighting are likely to have no PE, and if they are too far away you may notice extreme PE as they reach to absorb light energy.

Addition of Amino Acids and Food

While corals can synthesize amino acids through bacteria and zooxanthellae algae that they host, they can uptake amino acids externally from sea water. Many products available to hobbyists that contain amino acids have leveraged this knowledge.

According to Goreau et al. (1971), addition of amino acids in low concentration such as glycine, alanine, phenvlalanine and lucine has been shown to elicit feeding responses in corals, such as opening and swelling of coral tissues, extension of tentacles and sometimes extrusion of mesenterial filaments. There are a number of different amino acids and not all offer the same effect. And keep in mind that many organisms can also benefit from the addition of these amino acids, including the unwanted ones from aiptasia to cyanobacteria, etc. Without knowing the exact types of amino acids being offered in today’s products, it’s important to know that regular feeding of fish food will offer the same benefit as well. 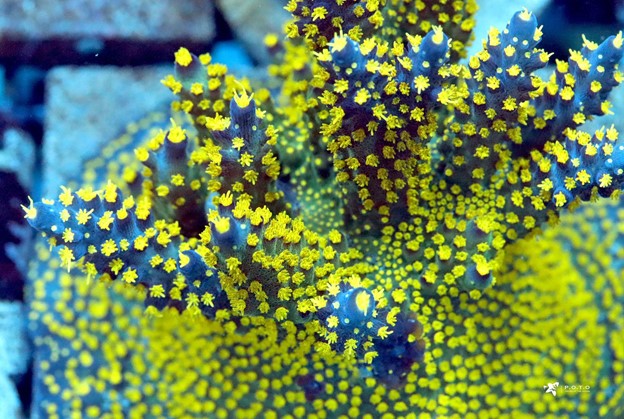 Some corals can have almost the same degree of PE night and day given the right condition, such as this Acropora valida (commonly known as POTO Blueberry Bonsai). While we do not supplement any amino acid products, we feed our fish very well in this tank.

Polyp extensions (PE) in SPS corals like Acropora is one of the best indicators of health and stability in a reef aquarium. Many factors can affect PE, including pests such as red bugs or acro eating flat worm (AEFW), nipping by fish that have coral polyps as a part of their natural diet, maintaining stable parameters, and providing adequate flow and lighting conditions. Remember to have adequate filtration so you can feed your reef, and it will thank you with extended polyps.