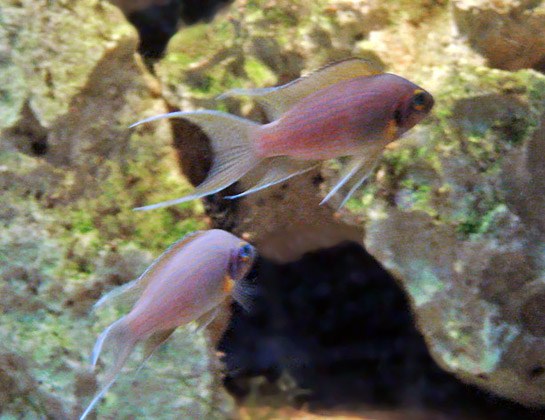 
Adam Reddon from McMaster University experimented on African daffodil cichlids (Neolamprologus pulche) by injecting them with isotocin, the fish version of oxytocin.  He then observed their interactions with other fish following treatment; Reddon discovered the tropical fish became more responsive to social queues.

The cichlids grew more aware of their tank-mate’s sizes and actually became more aggressive towards perceived challengers (ie larger specimens or even their own reflections) compared to saline-treated control counterparts who were aggressive towards every fish regardless of size.  On the other hand, when Reddon injected isotocin into “lesser’ middle-of-the-social-heirarchy specimens, these fish became even more submissive in the group.

Previous isotocin studies have shown that goldfish and zebrafish were more likely to approach one another after treatment.  These findings demonstrate isotocin increases social sensitivity in fish and sheds insight on oxytocin’s effects on mammals including humans.

Fishkeepers all know some fish are incorrigible bullies who will pick a fight with any fish.  Might isoticin treatment help them to better socialize with tank-mates?  Granted, such treatments are impractical and unlikely, but it’s still interesting food for thought!