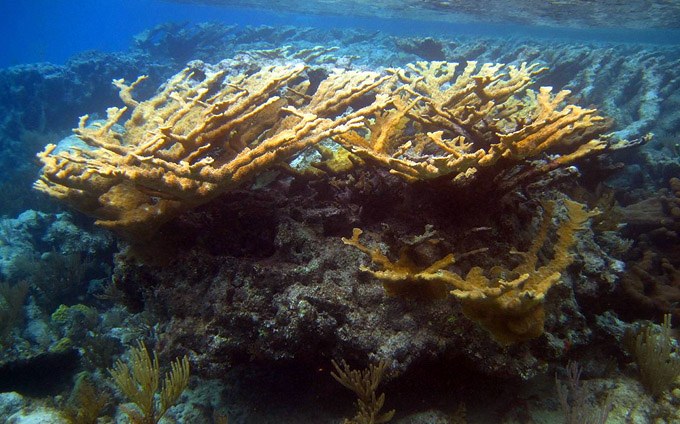 
Acroporid serratiosis (APS), commonly known as White Pox Disease, has ravaged Acropora palmata across the Atlantic tropics for over the past decade.  The pathogen responsible for this disease was a mystery to science … until now.

Scientists have identified the bacterium Serratia marcescens – found in human feces – as the culprit behind APS.  When scientists subjected healthy A.palmata to a particular strain of S.marcescens (PDR60) found in human sewage, the corals developed APS in as little as four days.

White Pox is an anthropogenic disease.

James Porter, a co-author of the study from the University of Georgia, states for NPR News: “This is almost a man-bites-dog story.  This is a very rare and unusual evolutionary triple jump.  [The bacterium] went from humans to the lower invertebrates — coral. It went from the terrestrial environment to the marine environment. And then it went from the anaerobic conditions of our stomach to the fully oxygenated conditions on the reef.”  Porter goes on to say in MSNBC: “This is quite an unusual discovery. It is the first time ever that a human disease has been shown to kill an invertebrate.  This is unusual because we humans usually get disease from wildlife, and this is the other way around.”

Scientists are still unclear how S.marcescens make corals sick.  However, now armed with conclusive evidence, science can make a convincing argument for communities in Florida to upgrade their waste management facilities, such as replacing septic tanks with modern wastewater treatment plants.  Case in point: Key West upgraded their leaky sewer system in 2001 because high bacteria counts forced frequent beach closures, driving away tourism.  Elkhorn coral was an unintended beneficiary of this upgrade;  Key West has not had a single new case of APS since they transitioned to the advanced sewage treatment facility.

Now we know why.

The full study was published on August 17, 2011 in PLoS ONE.  This study will hopefully accelerate progress in sewage treatment protocols in Florida, forcing local communities to clean up their act … quite literally.