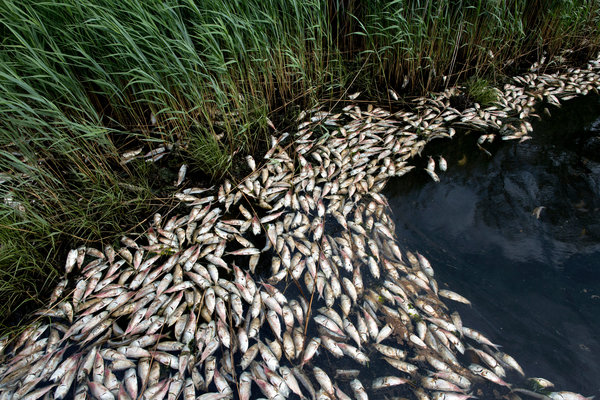 The residents of New York have witnessed horrible fish kills for the past two months, the pictures resemble something out of a horror movie. Last April, hundred’s of dead sea turtles washed ashore along Riverhead, New York. This week, thousands of fish have washed up along the Peconic River and Flanders Bay. Scientists believe the fish deaths are due to algal blooms, fed by elevated levels of nitrogen. Suffolk County has seen rapid growth in the past thirty years, without the proper infrastructure to support it. Most residents use outdated system of septic tanks, which cause the high levels of nitrogen. Fertilizers, used in the regions famous winery vineyards, also lead to excess nitrogen. As the nitrogen levels rise, the fish have to compete for oxygen with the algal blooms. With oxygen levels dropping to zero, this is a losing battle. It is a very sad situation and a clear reminder of how important lowering pollution levels in our ever growing world is. Suffolk County is attempting to make changes. It has released a water management plan, which identifies nitrogen as ‘public water enemy number 1’. Scientists expect more fish will die this summer, if the nitrogen levels remain the same. Suffolk County has started a nearly 400 million dollar expansion of the sewer system, to reduce the reliance on septic tanks. Unfortunately, the nitrogen damage has already effected the waterways, and will take a long time to remedy. This is just another sad example of the need to control pollution, and the alarming damage it can cause our waterways.  MORE