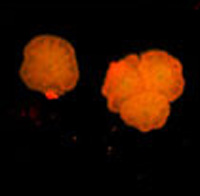 I came across this while trolling the web and wanted to share it with you wonderful people.

While most of the article is talking about coral larve and global warming, which is pretty interesting anyway, the true winner for me is the dude that goes out once a year to collect a bunch of coral splooge in some tupper-ware.

What do you do with a tupperware full of coral splooge you may ask?  Naturally you manually crosspollinate it with the splooge of different species to try to make hybrids.

While I will personally stick to fragging, it’s good to know other options exist.

Some creatures find it easier to pick up and move as temperatures rise with global warming. And red coral is one of them.

Old New York Jews are another.  You can now find gray, black, and purple haired variants in abundance far away from their natural territory in Florida.

The natural fluorescent coloring of coral may show how far the organisms can travel before settling into a new reef, according to a study released this week by the University of Texas-Austin.

Researchers discovered that red coral is less likely to settle than green coral, meaning that redder coral is capable of moving greater distances from the parent reef. This movement could lead to cooler water, and may prove to be an important trait in the rising temperatures of the ocean due to global warming.

“This finding provides a really good lead towards possible functions of fluorescent proteins,” said Misha Matz, a researcher and professor at UT-Austin who conducted the study. “There is a chance that this finding will eventually help us track evolution of corals in response to global warming.”

Coral species need to find a balance between long range movement and short range dispersal for larvae, according to Matz.

“Staying in the parental reef is good idea,” Matz said. “But this idea becomes not so good if the environment is changing. If the parents suffer from excessive heat, it is beneficial to send babies further off to find a cooler latitude.”

These larvae fit for longer range travel face a lot of risks, since they may never find any environment that is suitable for settlement. Still, their odds are good—only one of the millions of larvae needs to survive in order to continue the gene pool.

“Corals and coral reef ecosystems are fragile, highly diverse and important ecosystems that are under a siege of human threats,” said Robinson W. Fulweiler, an assistant professor of earth sciences at Boston University. “Better understanding fundamental processes of coral ecosystems – such as larvae transport and settling – is a key component to learning how we can maintain, protect, and hopefully even restore these ecosystems.”

Matz cross-bred the coral for the study by collecting unfertilized coral gametes and fertilizing them himself. Corals only spawn once a year, an event that can be pinpointed down to the day. While the corals are spawning, Matz said a huge number of gametes can be collected.

“If you want to do genetic experiments, all you have to do is prevent them from cross pollinating,” Matz said. “We put plastic bins over them and wait for them to spawn, sort of like a condom for them. Then we can collect the gametes and mix them in any combinations we want and get the crosses.”

While Matz found the link between color and range of dispersal, it is still unknown whether color alone plays a functional role in the link. It may be that two genes—one involving color and the other adaptability—are just close together in the genome and therefore are often inherited together.

Matz is now mapping genes to investigate this further. If the genes end up being close to each other, Matz said, it is likely that they are just inherited together.