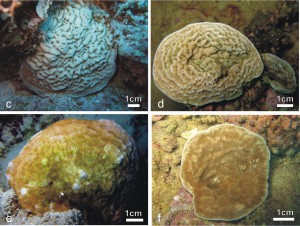 , named for its surprise factor (“inatessa” translating to “unforeseen”), is a pretty freaking cool Pachyseris originally thought to simply be another genus. Discovered in the Saudi Arabian Red Sea, this endemic SPS coral sports a yellowish-brown color and wrinkly appearance. While “wrinkly” might not be the most attractive way to describe a coral, it’s actually quite striking. I’ve always been a fan of Pachyseris, though I don’t see them all that often (this isn’t because of rarity of any sort so much as the fact they simply aren’t imported all that often due to lack of demand). Based on this appearance, researchers confused the species to be of the Leptoseris genus. Through further inspection and with the help of an electron microscope, Tullia Terraneo and Francesca Benzoni discovered otherwise, and gifted the new species its nomenclature. I’d really love to come across one. Pachyseris tend to be one of those innocuous corals that don’t often strike people due to lack of movement and color, but if you know what you’re looking at you can truly appreciate it. Read more about the misidentified discovery over at Nature Middle East, where they also get into some interesting new finds about the percentage of endemic species found in the Red Sea.