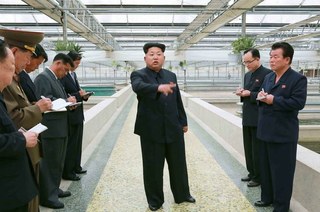 Kim Jong-un is none too pleased with this aquaculture staff.


Aquaculture is risky business in the DPRK

According to a report in UK’s Mirror, North Korean dictator Kim Jong-un ordered the death of the manager of a terrapin farm after touring the facility.  The aquarium staff reported to Kim that some of the terrapins, a type of aquatic turtle, had died and blamed the deaths on inadequate food supplies and frequent power outages.

Kim Jong-un was displeased with the failures and the complaints.  He reportedly unleashed a diatribe on the staff before ordering the aquarium’s manager taken outside and shot to death to serve as an example to the people of the DPRK.  Kim’s reputation for executions is well-documented, but this one is quite outlandish (if the reports are accurate).