In schools, fish zone in on neighbors 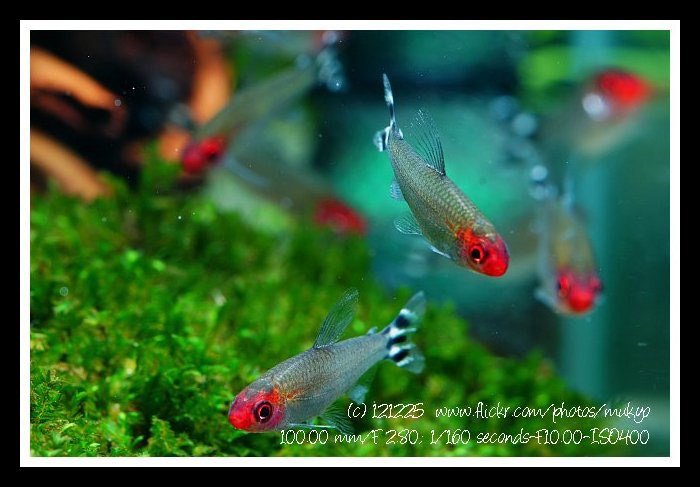 
Researchers studied the schooling behavior of Hemigrammus rhodostomus to learn how these tetras coordinate with others in their school.  By using a new method of behavioral analyses combined with a computer model to map the chain of direct interactions, the researchers learned new insights about tetras’ group dynamics:


From the University of Bristol:

New research has shown schooling fish constantly change who they decide to pay attention to and respond to one or two neighbours at a time. The study, published in PLOS Computational Biology, developed a new method combining behavioural analyses with a computer model to map the chain of direct interactions in a school of fish. The international research team, that includes the University of Bristol, found individual fish pay attention to its neighbours when the school moves together.

Schooling fish exhibit remarkable group-level co-ordination where many individuals move together seamlessly.  This is because individuals in the group respond to the movement of other group members. However, it is not known how many individuals each fish pay attention to.

Understanding how an individual fish works together with its neighbours is important because these interactions reveal how the school as a group move and explore the environment and could help identify how directional information spreads across a group.

Dr Luca Giuggioli, Senior Lecturer in the Department of Engineering Mathematics at the University of Bristol, said: “Our research shows that in the relatively common aquarium fish, the rummy-nose tetra species who show very strong schooling behaviour, there is a small number of influential neighbors, typically one or two, and they are not necessarily the closest ones. Surprisingly, group co-ordination appears to take place by fish constantly changing who they decide to pay attention to.”

The ability to co-ordinate shared actions and movements across a group without a leader has many advantages. It allows tasks to be divided among individuals in an efficient way and makes the group resilient to the loss of the leader or leaders, as the group’s behaviour does not depend on any one individual. The rummy-nose tetra species appears to have chosen this co-ordination strategy where any individual may become a leader depending on the need.

The research shows millions of years of evolution where nature has developed joint information processing and co-ordination methods that offer advantages beyond individual skills. The findings could be developed to co-ordinate the actions of artificial systems and human-built agents, such as swarms of drones that could be used in the future for search and rescue operations, environmental and wildlife monitoring.

Having identified individual-level interactions and the influential neighbours, the next step for the research team is to find out how these information sources are combined individually, and the sensory-motor mechanisms carried out by individual fish to decide their own future movement.  Answering these questions will help researchers to finely predict the collective patterns of schooling and how directional information propagates across a group.