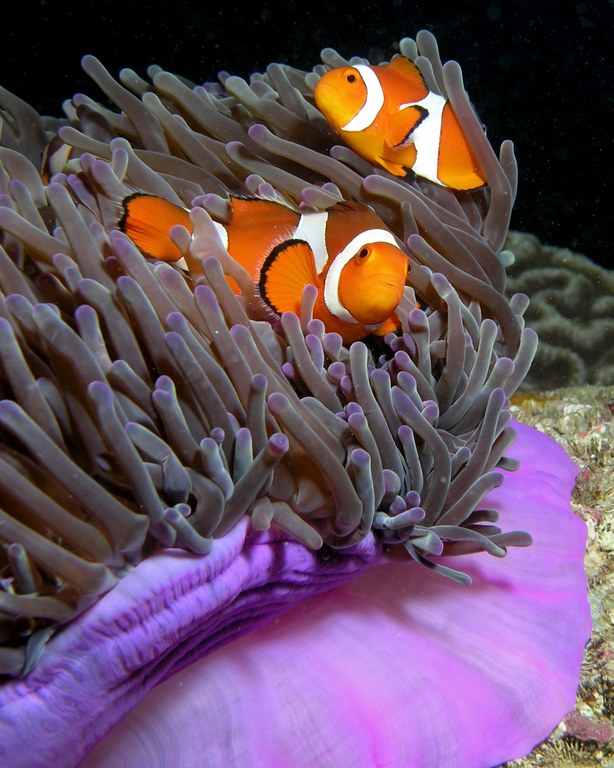 
A recent ten-year survey of 981 belt-transects at 20 reef sites throughout the Indo-Pacific found that 25% of all clownfishes (377 of 1508) encountered were cohabiting the same anemone with at least one other species of clownfish.  There was no observable trend for the combination of clownfish species nor type of host anemone, only that clownfish were more likely to share living quarters when their numbers exceed anemones’.

The Coral Triangle exhibited the highest levels of interspecies cohabitation, particularly at Hoga Island (Indonesia), where researchers found 437 clownfish from six species living among 114 anemones of five species. Every anemone hosted clownfish (without clownfish, anemones often fall prey to butterflyfish), and half of the anemones hosted at least two species of clownfish.

Researchers observed that aggression was remarkably absent in these interspecific cohabiting groups.  The dominant species would inhabit the center of the anemone while the subordinate species would accept living around the fringes.  Although living on the outskirts is more dangerous, it’s better than not having a home at all!

We want to be clear that this isn’t a recommendation for aquarists to try to mixing multiple species of clownfish in their aquariums.  Our collective experience tells us that clownfish can be aggressive (sometimes very aggressive) in captivity. Captive environments are different than that of the wild; for starters, wild anemones can grow to impressive sizes (upwards of a meter/three feet), so they can house multiple anemones with comfort.  We don’t yet fully understand the dynamics at work that make it possible for multiple species of clownfish to peaceably share anemones in the wild and if/how it translates to aquarium life.

The study is published in the Proceedings of the Royal Society B.