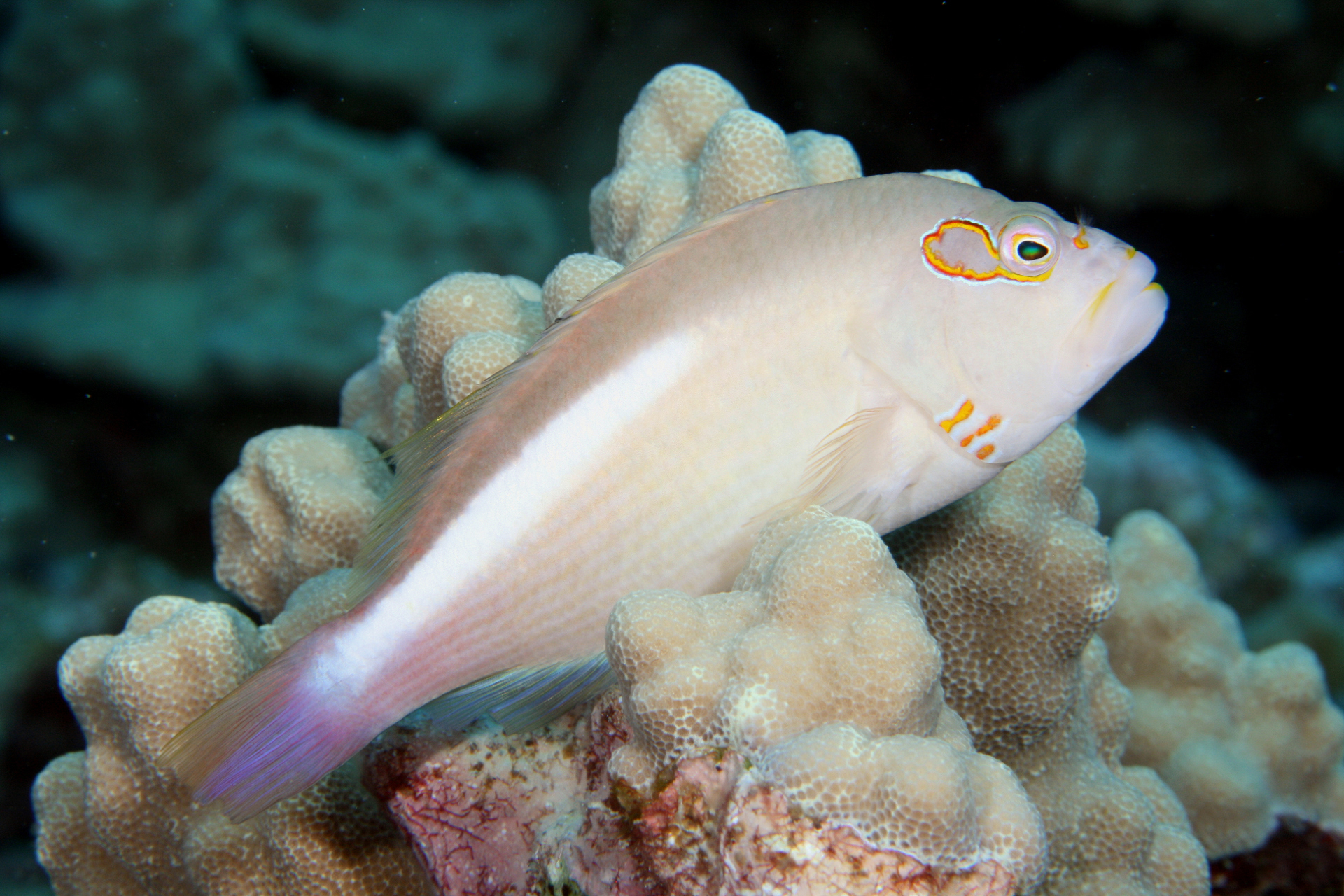 Paracirrhites arcatus, the Arc-eye Hawkfish, is a common species on Indo-Pacific reefs, occurring along the African coastline all the way to the isolated islands of Hawaii and French Polynesia. Unlike many of the fishes with such a broad distribution, there are no obvious differences here—genetic or morphological—to suggest that the regional populations differ from one another in any meaningful way. An Arc-eye Hawkfish from the Red Sea is, more or less, identical to one found in Rarotonga (as far as we know). But that’s not to say that this fish is lacking in diversity.

A pair of recently published studies are helping to shed some light on one of the more unusual facets of this species. P. arcatus is polymorphic, coming in either a light form—primarily pink with a bold white stripe posteriorly—or a much darker morph that lacks this distinguishing stripe. Prior studies have observed that the dark morph favors shallow (<5m) habitats that feature a dark basaltic substrate and scattered colonies of Pocillopora meandrina, while the light morph becomes dominant below 5 meters in areas with extensive Porites compressa growth.

The explanation here is simple enough: the dark P. arcatus blends in better against the dark rocks of the shallows and the light P. arcatus is camouflaged against the dense backdrop of Porites. To prove this, Whitney, Donahue & Karl 2018 conducted a survey along the Kona coast of Hawaii to document in detail the relative abundance of these two forms and how their presence correlates with certain environmental variables (e.g. depth, slope, coral coverage). And, confirming these earlier observations, the dark morph does predominate above 5 meters, with the light morph found further down. 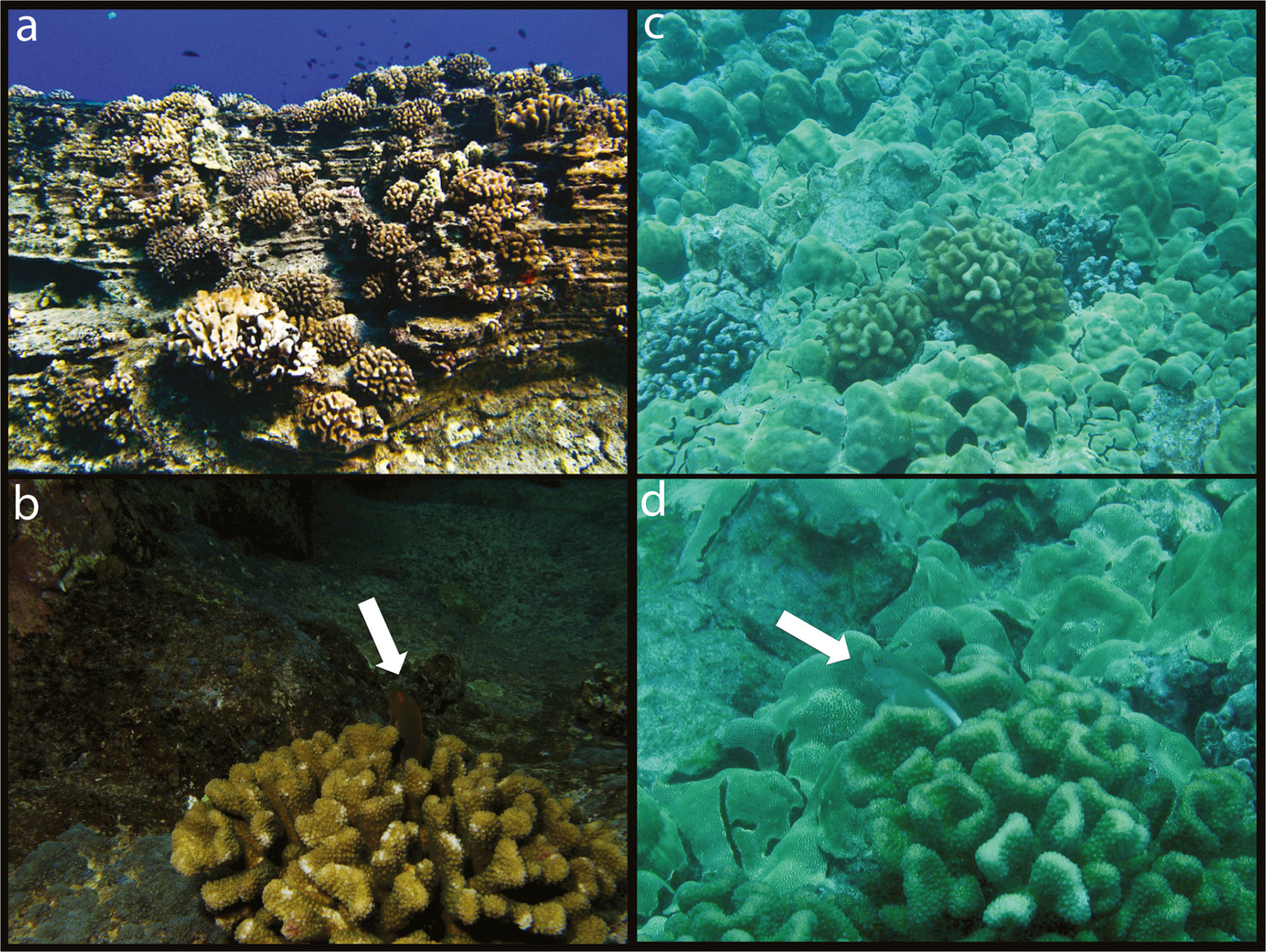 Perhaps most interesting is the presence of mixed populations in the intergrading habitats that separate the basaltic shallows from the deeper reef slopes. To be clear, in even the darkest and shallowest of habitats one is still likely to run into the occasional light morph of P. arcatus and vice versa, but in the so-called “Porites lobata reef benches”, both forms can occur side by side in equal abundance, often as mixed-phenotype pairs. Additionally, a third form becomes noticeable here, which appears intermediate in its coloration, as if it were an intraspecies hybrid.

So think about this from the perspective of an evolutionary biologist… why is it that this single “species” is able to occupy such disparate ecological niches without natural selection taking over and driving these two morphs towards speciation. Or, alternatively, is that precisely what is happening here? And what are we to make of the intermediate form, which primarily occurs where the two main phenotypes overlap?

To answer this difficult question, Whitney, Bowen & Karl 2018 collected genetic data from more than two-hundred specimens representing all three color morphs in Hawaii. And, sure enough, there are at least some parts of the genome that do seem to differ among these various forms, with the intermediate phenotype showing a correspondingly intermediate mix of genes. This is exactly what we might expect in the earliest stages of sympatric speciation. We have an environmental variable (basalt vs coral substrate) that seems to impact the relative survivability within this species. And, most importantly, this seems to be fostering some divergence in the gene pool.

But where is this all leading? It’s tempting to to look into the future and see the light and dark P. arcatus slowly moving further and further away from one another until a tipping point is reached wherein they are no longer able to interbreed. But I’ll argue that this is never going to happen, and we need only look at the other Paracirrhites hawkfishes to understand why. 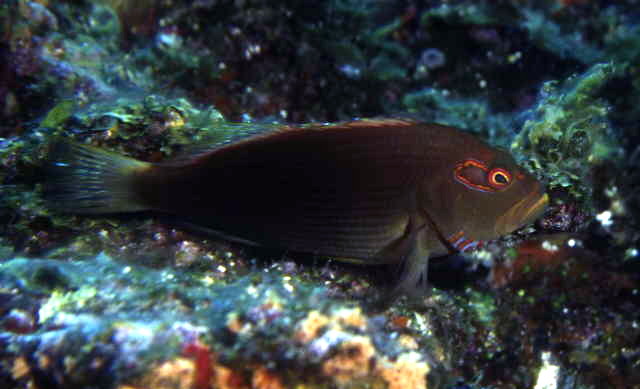 Polymorphism is not unique to this one species; rather, it occurs in seemingly every other species in this genus. For instance, the Whitespot Hawkfish (P. hemistictus) occurs in both a white-spotted dark morph and a more lightly colored variant possessing a full white stripe along its midbody. The Blackside Hawkfish (P. fosteri) shows the same dynamic, with a yellow-tailed dark form and a greyer white-striped counterpart. And then there’s the confusing situation surrounding P. xanthus, P. nisus and P. bicolor, which, as I’ve discussed previously, almost certainly represent distinct color morphs of a single species restricted to Polynesia.

Rather than a prelude to speciation, it seems that this chromatic polymorphism is just an unusual trait inherent to this lineage of hawkfishes. The lack of a true dark species in Paracirrhites can be taken as strong evidence that the minor genetic differences found in P. arcatus are not significant enough to lead to reproductive isolation and subsequent divergence. Perhaps there is simply too much interbreeding (i.e. gene flow) between the light and dark morphs to overcome the forces of natural selection. No doubt there is a survival advantage for the species as a whole in maintaining the ability to colonize both light and dark habitats with suitably colored variations. As the authors suggest: “Perhaps we are observing ‘flickers of speciation’, sparks of evolutionary differentiation that require yet another ingredient to ignite the process of complete isolation.”

In a sense, these morphs appear to function as pseudospecies, distinct enough from one another to be readily diagnosed as different, while still being fundamentally the same fish. They seem to dance their evolutionary pas de deux like a binary star, forever drawn towards one another in an inescapable embrace.