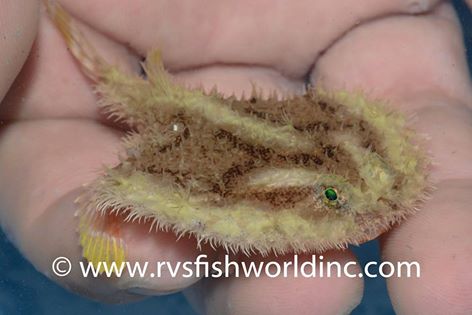 Like a pug or a bulldog, the Indian Handfish is just weird enough to be considered cute. This crawling pancake of a fish is quite a rarity in the aquarium trade and tends to be more often observed from deep sea submersibles than anywhere near a coral reef. But RVS Fishworld stumbled upon this individual in the shallow waters of the Philippines and managed to snap some wonderful photos of it obligingly posing on a hand (#handception). 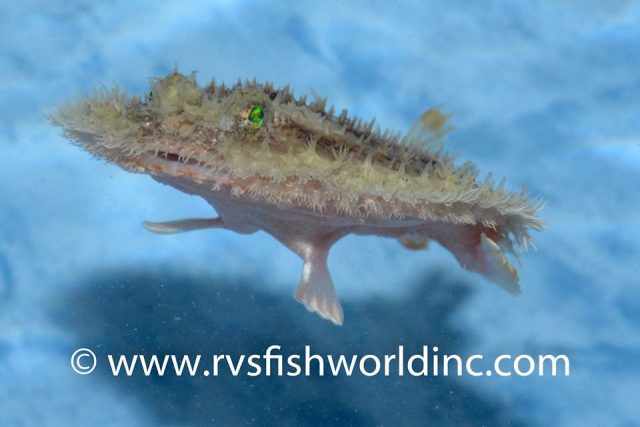 It belongs to the small and unfamiliar family Ogcocephalidae, known as handfishes, batfishes or seabats, which is comprised of fewer than 80 described species that are classified into 10 genera. This entirely benthic group has undergone some extensive morphological specialization, resulting in highly modified pelvic and pectoral fins that are used to scuttle and hop along the ocean floor. It’s not hard to envision our own fishy forebears moving about in a similar manner many hundreds of million years ago, but, in fact, this fish is only a distant relative, more similar to a perch than it is to any of our direct ancestors. 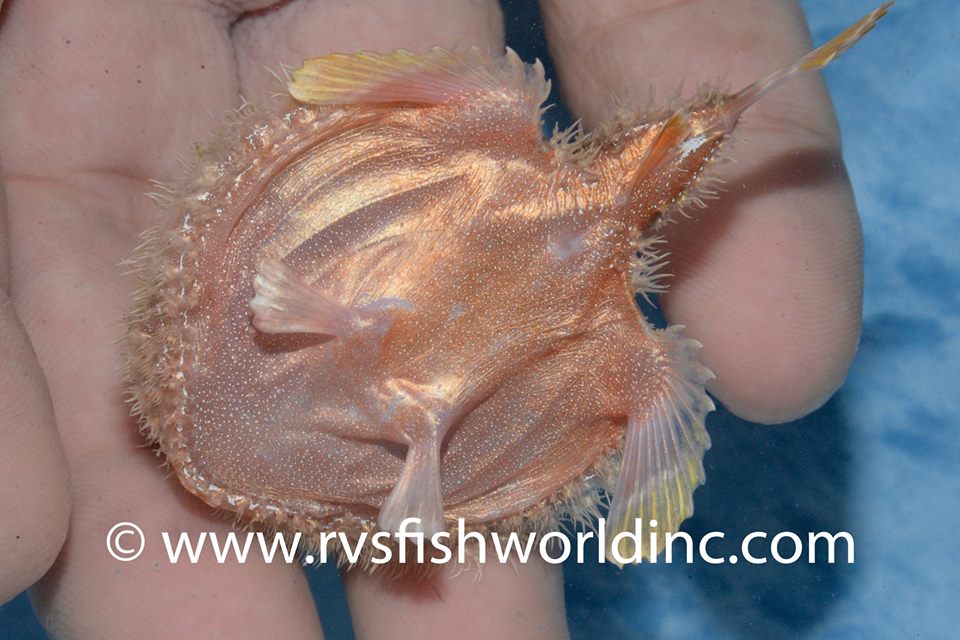 The closest relatives of ogcocephalids are actually the anglerfishes of the Family Antennariidae, commonly seen on tropical reefs and in aquarium stores. Both groups possess a similar modification to the dorsal fin, which is flicked about to entice prey. In the antenariids, this lure typically resembles a worm or fish, while in the Ogcocephaliidae the lure is rather innocuous and is thought to function through the release of a chemical attractant—an Eau de Mer that entices prey against their better instincts towards the rapacious, capacious maw of the handfish. 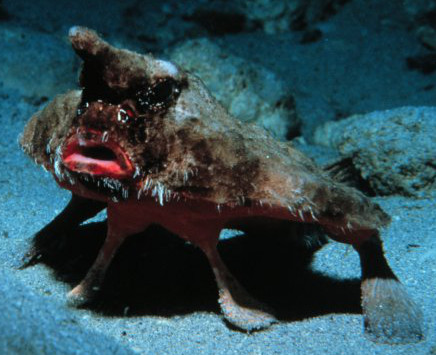 The highly flattened body and rounded shape of this specimen identifies it as belonging to Halieutaea (“hal ee YOU tee uh”), a widespread Indo-Pacific genus with nine known species and more yet awaiting description. They are most often observed on sandy or silty continental flats, though they can also be found in the depths around oceanic islands, as shown in the recent Okeanos expedition to the Mariana Islands. Most of the other genera in this family are a bit more elongated or pointy in shape, as can be seen in the only other group commonly seen in aquariums, Ogcocephalus. 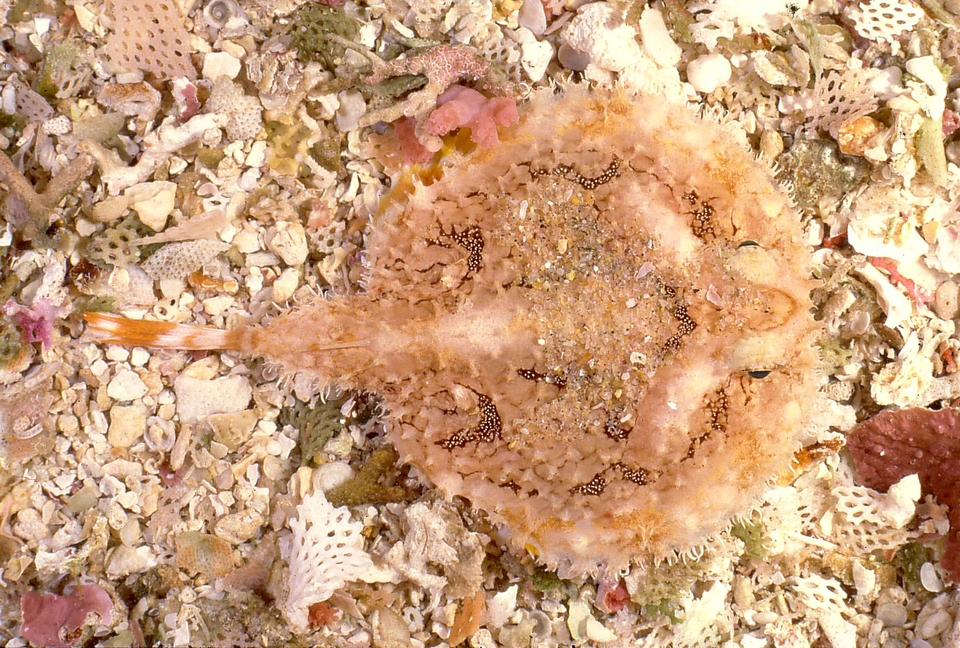 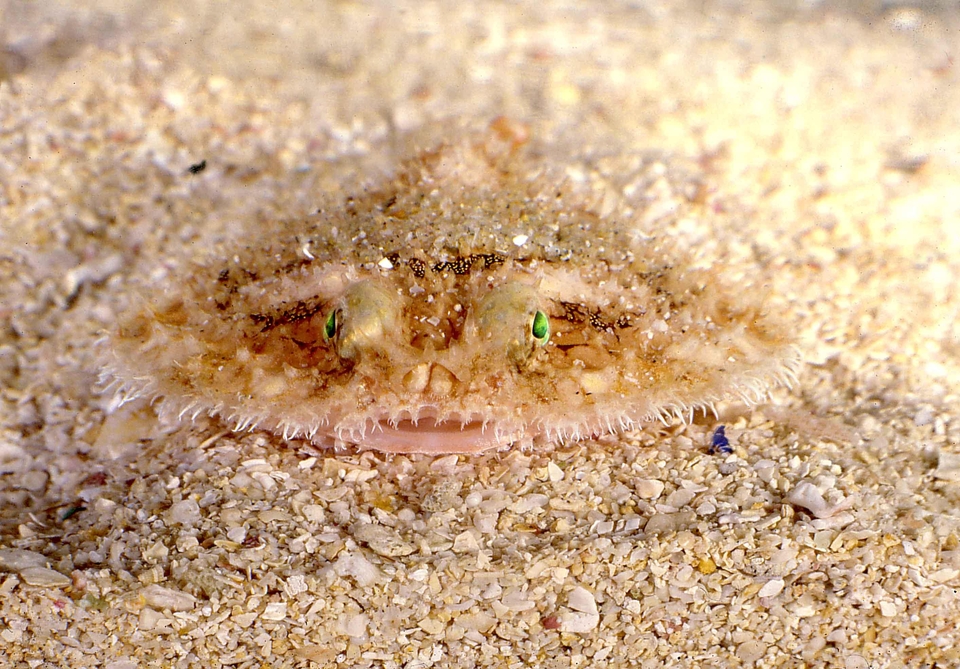 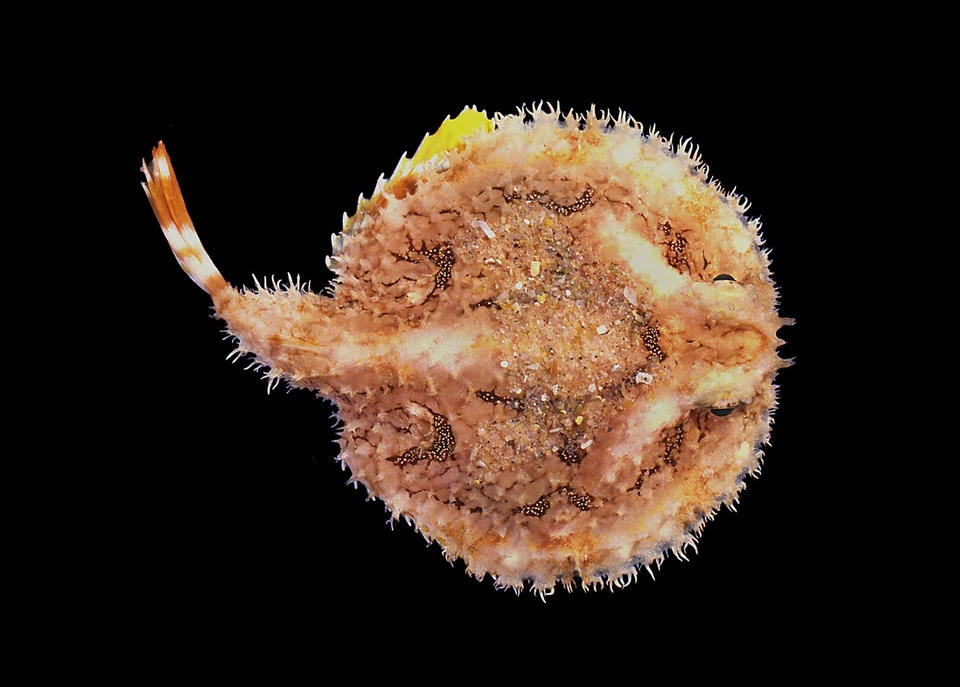 The yellow fins and dorsal patterning identify this particular individual as H. indica, a species originally described from the Indian Ocean but since found to be widespread throughout the Indo-West Pacific. This is not the first time this fish has made its way into an aquarium; the delightful video shown above illustrates one feeding and strutting about in captivity. Related species have also appeared on rare occasion, including what is apparently an undescribed species sporting bright red fins, seen in the video below.

With its lethargic way of life and a maximum size of just six inches, handfishes are probably best kept in a single species aquarium, or mixed with suitably large fishes which will show no interest in picking at the handfish’s vulnerable skin. This means no angelfishes, triggerfishes or butterflyfishes, but appropriately sized things like groupers, lionfishes and some eels would presumably work well. Live shrimp are probably necessary to get this predatory fish accustomed to feeding in captivity, but, as seen in the video, they can eventually be taught to take items directly from a feeding stick. This is good news for those wishing to add a handfish to their own aquarium, but good luck finding one.