Last night, as I was working on my videos for this wonderful site, my phone started to blow up. Apparently there is a wave of panic going around on social media sites saying that the Indonesian government has shut down coral export.

Check out the official letter from the Indonesian government that the many of the exporters received today: 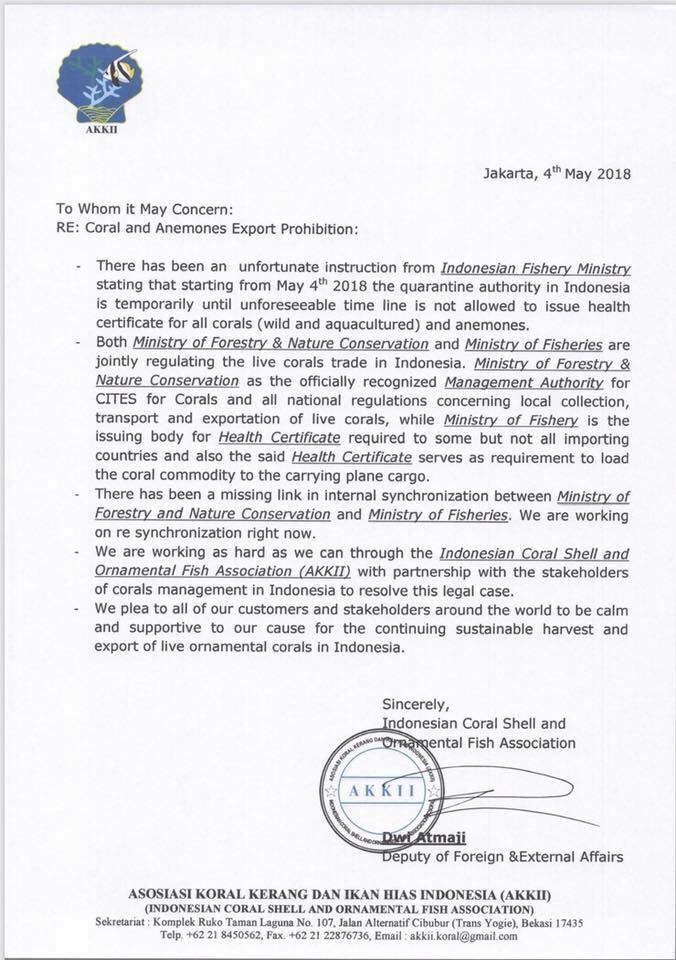 What does this mean for us?

1.)  Many businesses, both wholesale and retailers, will close because 80-90 percent of their corals are from the golden triangle of Indonesia.

2.) The rarity of these corals will cause a spike in the price of existing corals stateside.

3.) More coral vendors will be forced to aquaculture and farm a variety of corals. (If you are already doing so, you are ahead of the game. Kudos to you!)

What may have caused it?  (Logical Theories)

1.) Politics. (Government wants more money. There is also a rumor that the woman in charge of the Fishery Ministry who caused this isn’t in charge of the CITES for corals and that this act itself is illegal but I have no way to verify this at the moment.)

2.) Just as we have garage shops and chop shops in U.S. , there are many smaller operations in Indonesia that illegally take corals from the wild, chop them up, and sell them as mariculture piece on a mariculture disc. By eliminating export for everyone, they will be able to weed out the bad sorts in time. (but at what cost to many businesses over there and here?)

3.) They actually care about the ocean and want to close it to let it recover.

Does this mean that it’s permanently closed and we will no longer be able to get the corals from Indonesia?

There is speculation that it’s a mix up in between two different government agencies and it will be/ should be corrected soon. But no one knows the future. You saw Fiji and Hawaii recently. It may very well be possible for us to not see anything out of Indonesia for the foreseeable future.

Is it all dark and gloomy though?  I spoke with several people in the industry to hear what they had to say.

I spoke to Chris Meckley of ACI Aquaculture, coral wholesale powerhouse in Florida and he told me this:

“I’m not really too worried. I strongly believe that this is temporary and that it will come to an agreement soon enough as this will affect thousands of fishermen, exporters and their facility workers.”

I also spoke to Kris Cline of Carolina Aquatics, a premier coral wholesale facility located in North Carolina who told me this:

“We are hopeful that the agencies can come to an agreement very soon since so many people globally are affected by the decisions being made. This could make it very hard for many businesses here in the US to maintain if they have not diversified enough to be able to lose a major supply of livestock and still cover all expenses. We see this changing many retail stores’ and even wholesalers’ thought processes on doing propagation in house. We have been working on our in house farm for a while now but we are not where we want to be yet.”

I also reached out to Lou Schiavo of World Wide Corals for a comment and this is what he had to say about this situation:

“Reading over this today opens up my eyes more than ever. There are many external factors that can affect our hobby. Things can happen that are obviously out of our control.

Regardless of the outcome of this Indonesian Coral and Anemones Export Prohibition, we need to focus our efforts more on land based-indoor coral farming and sustainability of our hobby through coral propagation & fragmentation.”

Now that I got a feel for things from the US side, I reached out to Vincent Chalias of Bali Aquarium who is an major exporter in Bali that is directly impacted by this to get his thoughts and perspective.

“He doesn’t feel that this will continue and strongly belives this will be resolved in timely manner through negotiations.”

Sounds like politics are in the works on this matter at the moment. If scientific study shows that their coral harvesting is not sustainable for the environment, I would welcome this as time of recovery for our precious animals but many studies done in many different places (Hawaii and Australia come to mind) of the world that it is stable and sustainable,  I certainly hope that this will be resolved in a timely manner as it will affect many people. I hope that people will take note of this and start doing more coral farming and aquaculture for self-sustainable livelihood.

I wrote this article early this morning and there is now update from this.

We have received an update from a source closely involved in the Indonesian coral trade in response to this morning’s news that Indonesian coral exports have been halted.
“I want to be clear, there is no Indonesian coral ban. CITES permits are being issued as normal.
“This story is just a technical problem between two ministries in Indonesia. The fishery/quarantine people don’t want to issue the health certificate that has to accompany any live coral shipment, locally and internationally. There are ongoing negotiations between these two ministries to solve this technical issue. Indonesians are progressive people and will look for a quick positive outcome. It will be solved within a couple weeks.
“There won’t be any local or overseas transportation of coral and anemones until health certificates are released again. Shipments will only be postponed, but I anticipate the resumption of coral exports in short order.”
Source : https://www.reef2rainforest.com/2018/05/04/update-from-indonesian-coral-trade-insider/