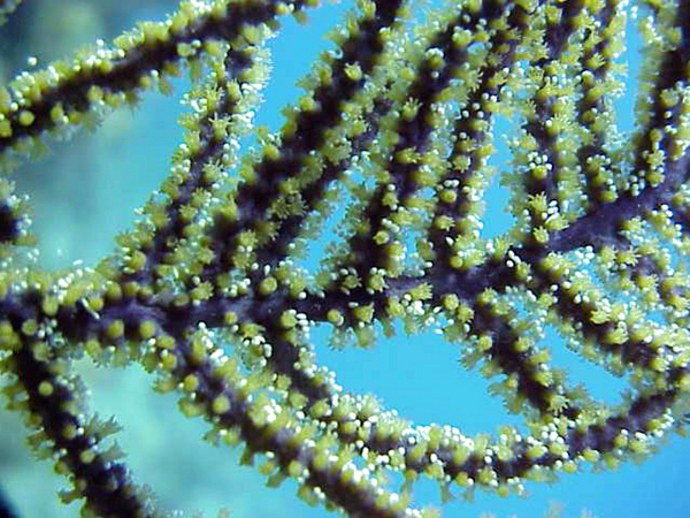 BUFFALO, N.Y. — Coral colonies that suffered tissue damage in The Bahamas were still producing low numbers of eggs four years after the injuries occurred, according to new research by University at Buffalo scientists. Tiny sperm-producing factories called spermaries were also in short supply.

The slow recovery was a surprise, said UB geology professor Howard Lasker, PhD, who led the study on the coral species Antillogorgia elisabethae.

“The really interesting finding was that four years later, these colonies were still displaying an effect,” Lasker said. “They don’t necessarily look damaged anymore, but it takes some time to get back to where they were in terms of reproduction.”

“This research has broader repercussions,” Lasker said. “When you start talking about damage to reefs from events like hurricanes, you might say that the coral survived, that it lost some tissue, but it’s still reproducing. That’s true, but we now know the corals are not quite as healthy as we thought.”

The study appeared Dec. 1 in the Journal of Experimental Marine Biology and Ecology. Lasker’s co-author was Christopher Page, a master’s student in UB’s Graduate Program in Evolution, Ecology and Behavior. Page, who has since graduated, is a biologist at the Mote Marine Laboratory in Florida.

The species that the researchers examined — A. elisabethae, formerly known as Pseudopterogorgia elisabethae — is a Caribbean gorgonian coral. The coral forms male and female colonies and, during reproduction, the females release eggs which remain on the colony’s surface to be fertilized and develop into larvae.

To study the effect of tissue damage on sexual activity, Lasker and Page looked at egg and sperm production in A. elisabethae colonies near Cross Harbour, Abaco in The Bahamas.

Such harvests took place in 2002 and 2005. In 2009, Lasker and Page returned to the area before the annual spawning, which for A. elisabethae occurs in November and December. The researchers compared 24 colonies that had been cropped to 20 that had not, carefully dissecting 24 individual coral polyps from each of the 44 colonies to count the reproductive organs within.

In most corals, sexual maturity is understood to be a product of colony size, as opposed to age. As a general rule, large corals reproduce. Small ones don’t. The new research is the latest to support the notion that damaged corals may have lower fecundity because they divert resources away from reproduction and toward growth and injury repair, Lasker said.

“The mechanism controlling resource allocation is unknown, but regardless of the process the important implication of the finding is that populations that appear to have survived and to have recovered from disturbance events may produce fewer gametes than the size and number of colonies would suggest,” Page and Lasker wrote in their study.

The National Science Foundation and Mark Diamond Research Fund of the UB Graduate Student Association supported the study, which is titled, “Effects of tissue loss, age and size on fecundity in the octocoral Pseudopterogorgia elisabethae.”

(via University of Buffalo)