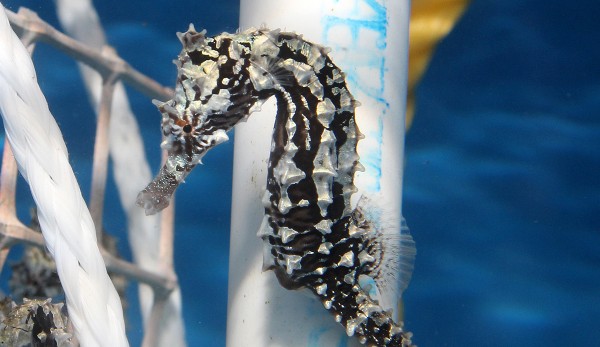 Introducing H. erectus var. Snowshine. As the head seahorse nerd and proprietor of FusedJaw.com, most of my articles shy away from my own operations. However, I’ve had a project underway I’ve been quietly working on for while that I’m excited to share: The Snowshines, a new variety of Hippocampus erectus. This new variety of seahorses, named Snowshines in honor of both the blustery state they were created (Wisconsin) a well as their unique coloration. Snowshines are still Lined Seahorses, H. erectus, but through selective breeding exhibit an unusual amount of pearlescent white markings, mixed with a base coloration that can manage a wide range of colors, all tinted with a glistening sheen. Light colored Snowshine H. erectus There have been a few varieties of seahorses offered by breeders based on color; but seahorses can change colors, making breeding for color a daunting task. Pintos, pieds, and other piebald varieties are probably the most More: Introducing the Snowshine Seahorses