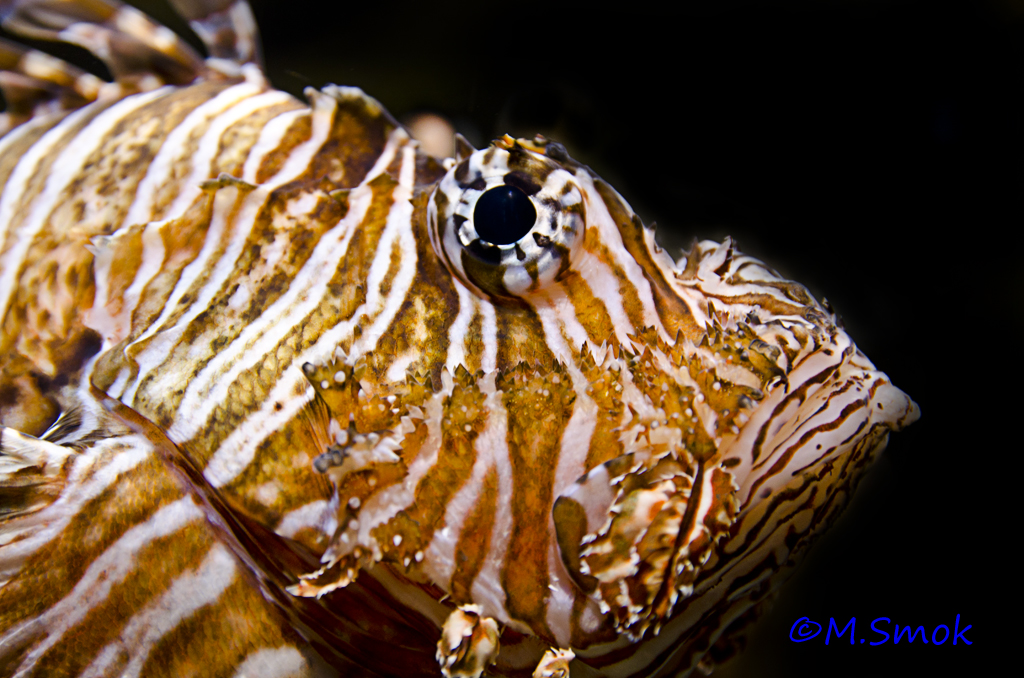 photographs and video by author

Most of you have probably heard about the invasive red lionfish Pterois volitans that has been threatening waters around thr Caribbean islands, the Gulf of Mexico and Florida. I have too, but I never thought how serious the problem is until I’d seen it myself. That inspired me to write this blog post and bring up some facts and studies on this fish.

The Red lionfish is a fearsome looking fish that can attain a length of 15 inches. It belongs to the family Scorpaenidae (Scorpionﬁshes).It has a very broad (natural) range of distribution through the Western Pacific, Indian Ocean and Red Sea. The fish is banded with white and red stripes throughout its whole body. The dorsal and pectoral spines of this lionfish are venomous and can deliver a painful sting, although the sting is not fatal to humans.

Nobody knows for sure how Pterois volitans got into the Atlantic Ocean, but the first documented sightings in Florida took place in the early 1990’s;  it is believed that the fish had been released from a large marine tank after Hurricane Andrew swept across Florida. Back then, nobody could predict that they not only could survive in the ocean, but would establish themselves and reproduce rapidly. In 2002 the population of lionfish in Florida was steady and started to be a real threat to native species. 2004, and lionfish are all over the Bahamas, then Cuba and the southern Caribbean. Today, the red lionfish has established populations along almost the entire Eastern Coast of the US (from New England to Florida), all of the Caribbean Sea and most of the Gulf of Mexico. Here’s a link to an interactive map showing their distribution throughout the years (map courtesy of USGS)

WHY IS IT SUCH A SERIOUS THREAT? 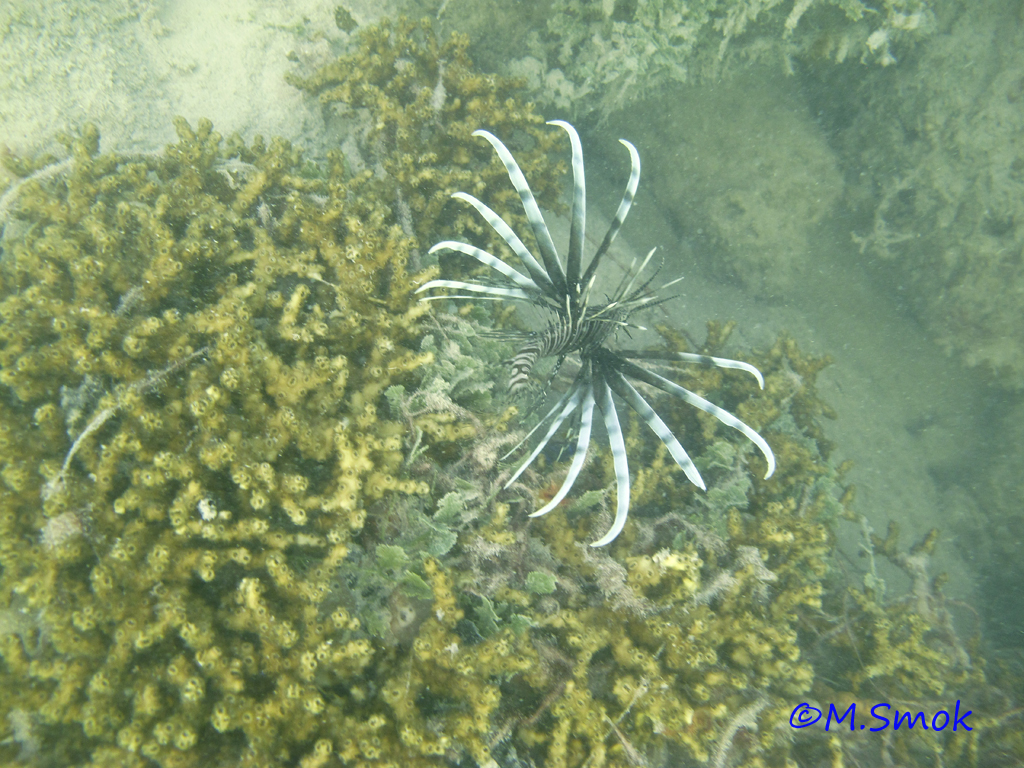 There are a few reasons why the lionfish invasion can have a devastating effect on the future of the native fish population:

a) The lionfish has no known predators in the Atlantic and, worse, is not recognized as a predator by local fish. This makes those natives an easy meal for the lionfish.

b) Pterois volitans is a prolific breeder that can establish itself in a new territory in no time–a single female can lay up to 30,000 eggs in one spawning ,and can spawn every 4 days!!! Let’s do a little math and say that a female lays only 10000 eggs every week and only 1% of those eggs hatch and grow to adulthood- you have ONE HUNDRED more lionfish weekly. After a year there are over 5000 new predators, all from that one female!!!! And, as far as scientists know, their survival rate is higher than 1%…

c)Lionfish have huge appetites: it is not rare for biologists to find more than 50 fish inside a lionfish’s stomach ,and that often includes very important juvenile tangs, parrotfishes and fish humans consume like snappers and groupers

d)This fish is extremely arrogant, it doesn’t get scared or even move when a bigger fish or diver approaches– I had to literally poke it to make it hide in the rocks. 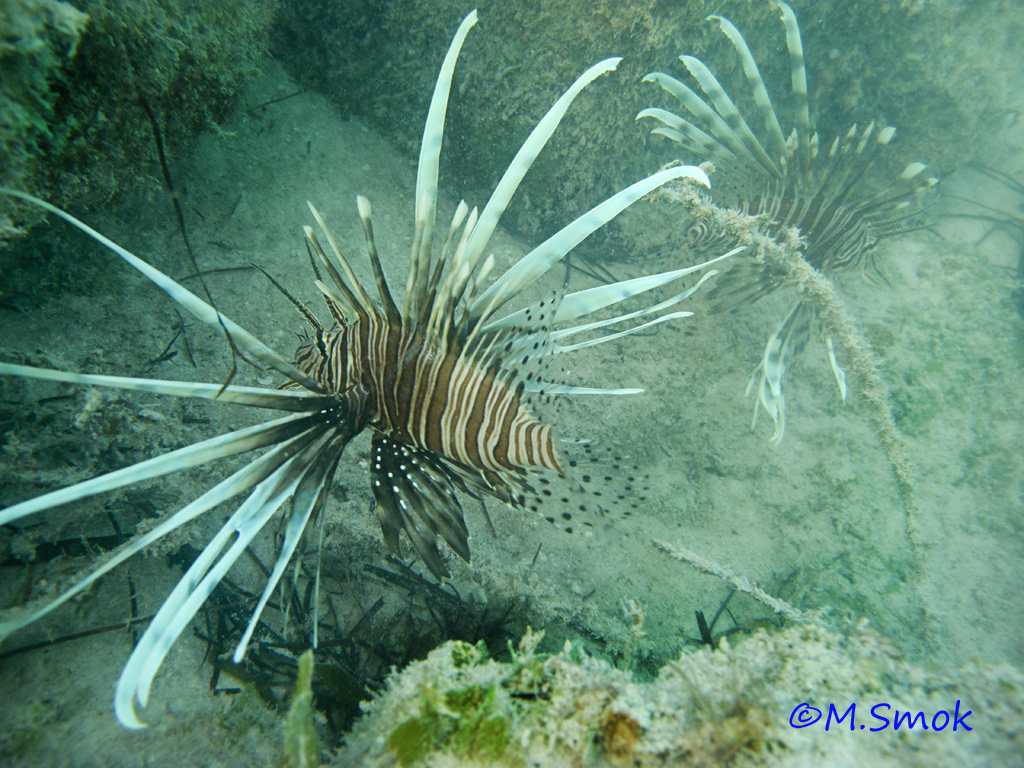 The one question many of you may ask now is “Then why is the lionfish not out of control in the Pacific?” The answer is, nobody really knows. Unfortunately, there are not enough studies about this fish and its habitat, therefore we don’t know how it is controlled in its native range. One fact is evident– we has too be something, either predators or habitat limits, that keep lionfish population under control.

Here is a video I shoot at dawn while snorkeling offshore- it appears to be a breeding pair:

An invasive lionfish species filmed in Florida Keys May 2011

There is some good news though:  there are a lot of awareness programs starting and efforts to hunt as many lionfish as possible. Things like the Lionfish Derby organized by Reef Environmental Education Foundation (REEF) or private hunting trips from dive operators exist. There is also an ad campaign that promotes eating the invasive fish and, supposedly ,it tastes delicious!

I am afraid it is unrealistic to get rid of the lionfish from our waters, but with help from officials as well as people like you and me there is hope that we can control the population of this highly invasive species. 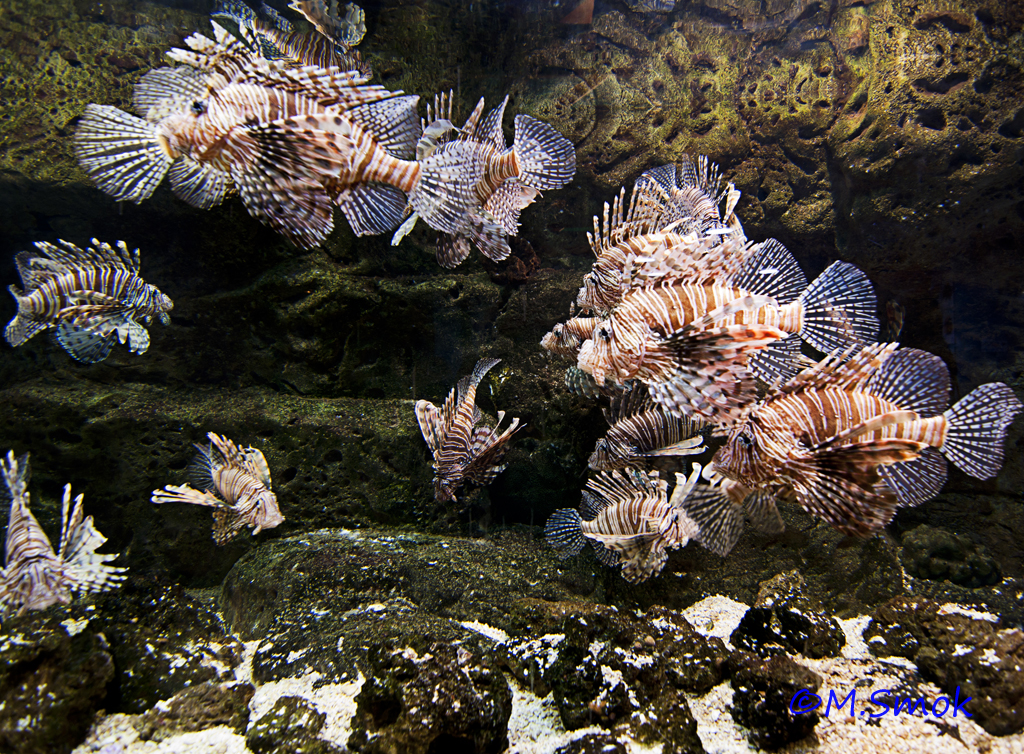 Check these sites for more info on the efforts to control Red lionfish invasion: