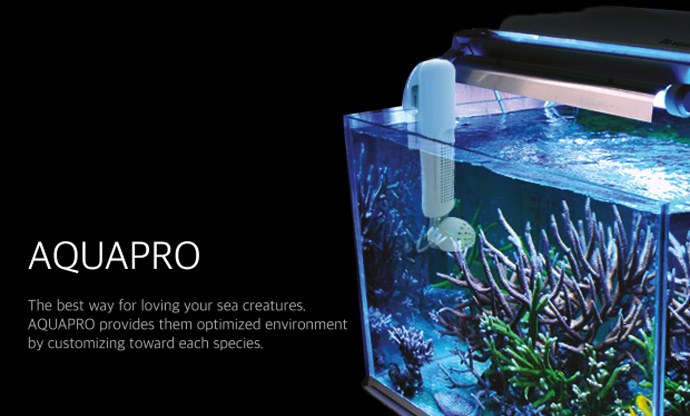 The Aquapro is designed to hang on the side of standard glass aquariums.  The device measures pH, temperature, and salinity and report these information to your iOS and Android device (including sending out-of-tolerance alarms) via WiFi.  The Aquapro also features a miniature prop pump located at the bottom of the device.  It appears there are two pump options available: 150gph and 320gph.  We assume the pump is controllable via WiFi, though little detail is presented.

From what we can gather, the Aquapro will retail at about $150-200 USD.  To learn more or to help fund this crowd-source, visit Aquapro’s Indiegogo page.

On the plus-side, the Aquapro looks fairly attractive, should be simple to install and operate, monitors/reports three critical values, and has no consumables to replace nor parts to upkeep.

But for its asking price, we would hope it monitors more values than just pH, temperature, and salinity.  For example, a high/low water level sensor seems like an obvious addition to this form factor, which would greatly increase its value.  The hang-mount also precludes its use in some aquariums (e.g. “euro” braced aquariums), whereas a magnet mount would prove more versatile. Furthermore, the small prop pump is cute but appears ad hoc and unnecessary to us.  It combines two dissimilar types of technologies with no clear synergy.

Overall, it’s refershing to see more technology helping make fishkeeping simpler and more accurate.  A little revision to its design and we believe the Aquapro could be a real winner.