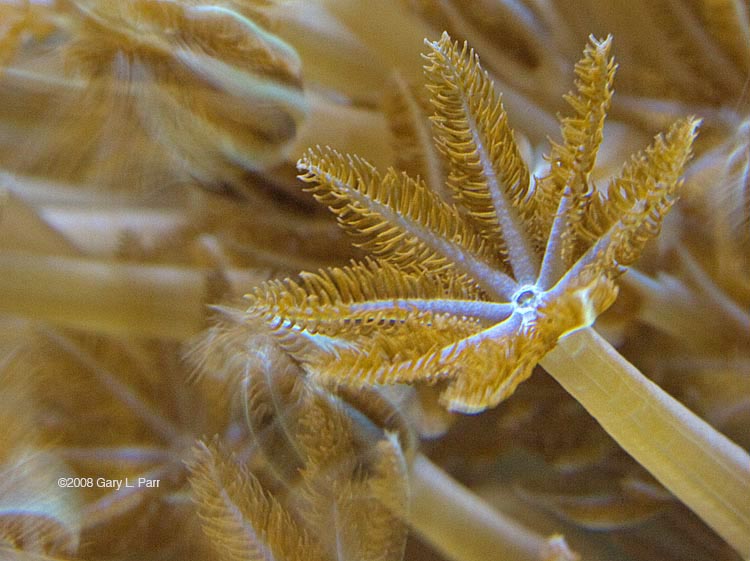 This image is 3 years old, but still one of my favorites because of the story behind it. The image was created during a visit to the fish room of Rich Dietz. Most know him as Mr. Firemouth. We spent the better part of a day talking about reefs and photographing his corals and fish. In his display tank, he had a large colony of a xenia species I’d not seen before. As impressive as the colony was/is, it didn’t change my opinion about xenia, a coral that I discovered, much to my chagrin, that I’m very good at growing.
As I photographed Rich’s fish and corals, I intentionally avoided the xenia colony. I had no interest in adding a xenia photo to my collection. Toward the end of the session, I was looking for other corals to photograph and kept going back to the xenia colony that had been tirelessly pulsing throughout the day.
As I watched all of those pulsing polyps, I wondered: If I isolated one polyp and timed the shot at the moment the polyp opened, could I also get a movement blur in the background from the rest of the colony?
I now had a photographic challenge and started watching the colony from a different perspective. I quickly found a polyp that could be isolated through depth-of-field control. I knew it wouldn’t be perfect, but was confident the isolation could be more than satisfactory. Once I found the right exposure setting, it became a matter of timing the shot. My focus was now on the rhythm of that one polyp.
It took about 20 shots to get this image. Note that I still employed the rule of thirds and didn’t put the polyp in the center of the frame. I cropped the image from the left side because the full width of the frame presented too much of the blurred background and detracted from the “frozen” polyp.
Xenia is still my least-favorite coral, but this shot will always be in my top ten because it’s a respectable result from an interesting challenge.
Technical details: Canon 20D, Sigma EX180 macro lens, 0.4 sec. at f/16, ISO 800, tripod.–Gary L. Parr, www.gparr.com, www.reefthreads.com