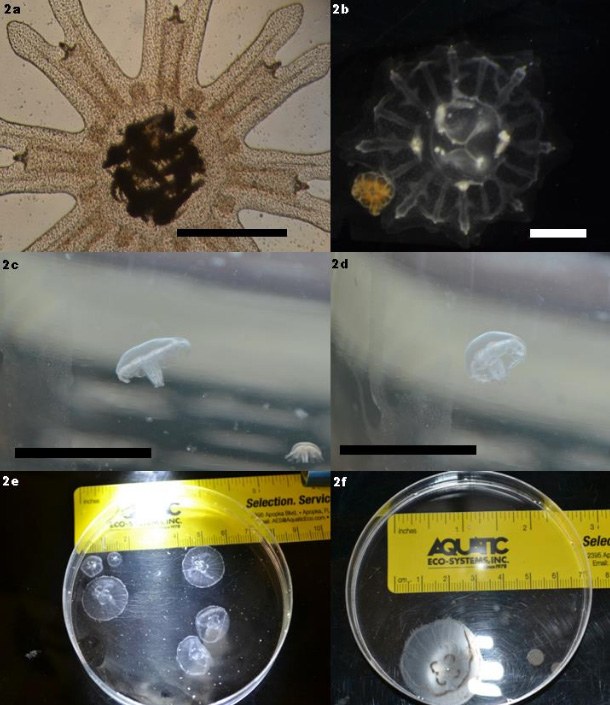 The documented growth rate of moon jellies over the course of one month subjected to “peanutbutterification”.


Who doesn’t love a good PBnJ?

The Dallas Zoo aquarists first tried to gut-load Artemia (brine shrimp) but then decided to directly feed blended peanut butter to their moon jellies to test PB’s value as a sole food source (or as the researchers describe it: “peanutbutteriliciousness”).  They discovered Aurelia aurita fed a pure emulsified peanut butter diet grew on par with jellyfish fed a fish/shrimp-based protein diet based on anecdotal observation.

While the research was admittedly undertaken for personal curiosity and amusement, the study’s non-peer-reviewed findings actually pave the way to possible new sources of aquaculture feeds that are more sustainable than ocean-harvested protein.  This is especially significant with jellyfish aquariums trending in both public and private aquaria.

The researchers describe their motives and outcome in their paper’s introduction:

“[…] We would love to claim we conducted this trial with noble purpose, but the truth is that we just wanted to make peanut butter and jellyfish simply to see if it could be done. Whether or not it should be done is a question no doubt to be debated by philosophers for the ages (or at least by some aquarists over beers). We herein report on what we believe to be t he first known unholy amalgamation of America’s favorite lunchtime treat and live cnidarians. The success of our trial group of Aurelia on this experimental diet was surprising, and we hope this ridiculous experiment illustrates that unconventional approaches in husbandry are at the very least, worth trying once.”

We thank John Foster for bringing their study to our attention.  Science is not without its serendipity!