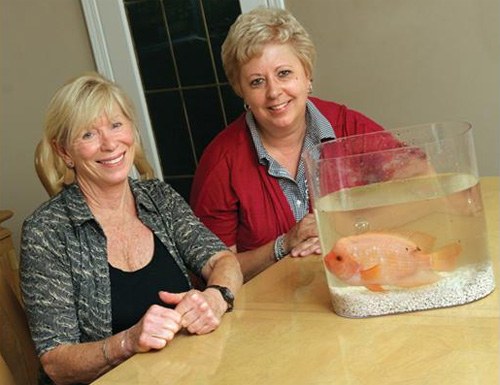 Jan Bailey observed a big golden fish mysteriously falling from their backyard cedar tree.  When her husband went out to investigate the strange occurrence, he discovered something even more bizarre; The fish – a large 25cm (10 inch) midas cichlid – was still alive!  The Baileys quickly placed the fish in a water and contacted their friend Lynda Taylor (an aquarist), who is currently tending for the fish in a 30 gallon aquarium while they attempt to to locate the owner of this heaven-sent cichlid affectionately named “Lucky.”

How might this have happened?  The popular theory is a large bird such as a heron snatched the pet fish but accidentally dropped its meal in flight.  The tree likely broke the cichlid’s fall, allowing it to survive the harrowing experience.

So if you’re looking for your lost midas cichlid, there are Canadian women you should talk to.