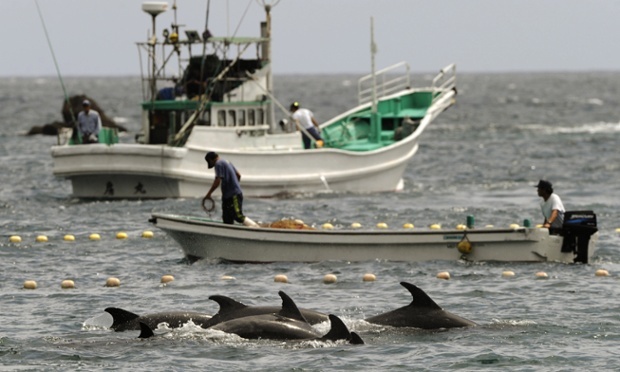 The Japan Association of Zoos and Aquariums (Jaza), a collection of 89 zoos and 63 aquariums, is voting on whether to keep buying dolphins from the notorious town of Taiji, made famous by the movie ‘the cove.’  Taiji is known for the dolphin drive hunt, which occurs every year, from September to March. This ‘hunt’ has received unfavorable international acclaim for the cruelty of the dolphin and whale killings. Locals, however, argue that this practice sustains fisherman and has gone on for centuries. The Jaza vote comes after Japan was threatened with expulsion from the World Association of Zoos and Aquariums (Waza) for its ‘continuing unethical procurement of dolphins from Taiji’. The Jaza vote will have large ramifications for the organization, no matter which way the vote goes. A “Yes” vote would end Japanese aquarium’s from using dolphins from Taiji, but allow continued associations with Waza. Where as a “No” vote would allow Japanese aquariums to continue using dolphins from Taiji, but would mark the immediate expulsion from its membership with AZA, thereby potentially limiting Japan’s ability to acquire rare species overseas and attending annual conferences or educational services or any other association with Waza. Waza has given Jaza until May 21st to stop using the Taiji dolphins or they will face expulsion from Waza.  MORE