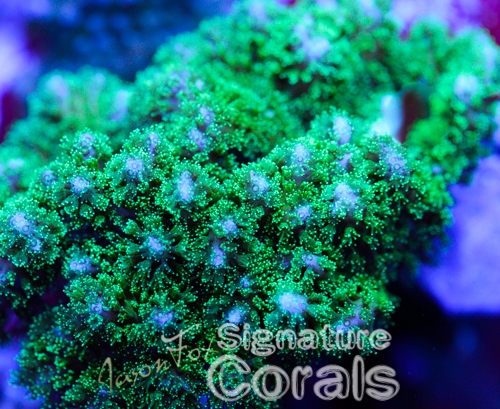 Pocillopora corals have been in the US aquarium trade for about as long as SPS corals have been coming into to the US.  They are generally one of the more easy corals to keep and they are typically pale yellow, pink to reddish in color.  Pocillopora have also been know to sexually reproduce in the aquarium.

The most common species in the trade is Pocillopora damicornis.  The growth form is cauliflower-like and the branches are often densely packed together.

Common names include: Cauliflower Coral, Brush Coral, or Cluster Coral. Cluster Corals are some of the most sought after having longer hairy polyps which are green in color and differ from the primarily yellow coloration of the species.

Pocillopora damicornis is commonly aqua-cultured and is considered peaceful.  It is capable of being placed in close proximity to other similar peaceful species of corals such as Stylopora pistillata.  Aqua-cultured Pocillopora will grow rapidly if provided with the proper lighting and water parameters.  Medium intensity lighting combined with a medium water movement is advised.  Like other stony corals, the addition of calcium, magnesium and other trace elements is required.