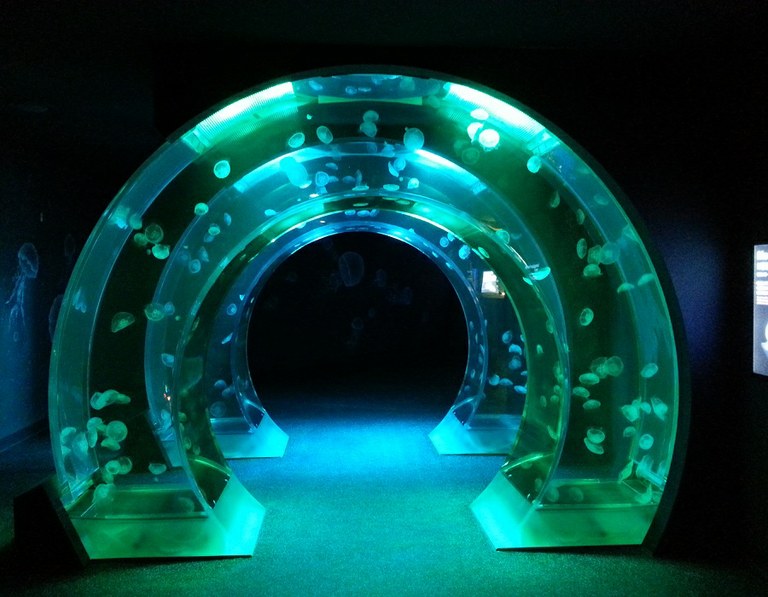 The horseshoe-shaped jellyfish aquariums required extensive design and development in order to provide the optimal flow necessary to successfully display jellyfish. Tenji used their expertise and computer modeling to create a design that blends elements of both a conventional cylinder jellyfish aquarium and a kreisel tank.

The bottom of the tank is plumbed like a standard cylinder jellyfish tank. However, the top two “chimneys” of the tank have flow boxes like a kreisel. The chimney helps with water skimming, which is important for jellyfish husbandry and tank maintenance. Good surface skimming is essential in jellyfish aquariums because they are fed large amounts of Selco enriched brine shrimp which often creates an oil slick on the water surface. Keeping the water surface free of oil helps to maintain water quality and prevents an unclean appearance (think scum on a bath tub). Each tank has two chimneys to ensure correct flow and the even distribution of jellyfish throughout the tanks.

For exhibit maintenance, the two chimneys at the top of the tank can be opened to allow siphons and cleaning tools into the tank. Tenji carefully modeled the curve of the tank and the placement and size of the chimneys to allow an aquarist to reach everywhere in the tank. There are also magnets on the tank to allow cleaning in the hard to reach areas. Finally, they designed each tank with a set of Hartford Loops that allow for easy bleaching and cleaning of the tank without a loss of excess saltwater.