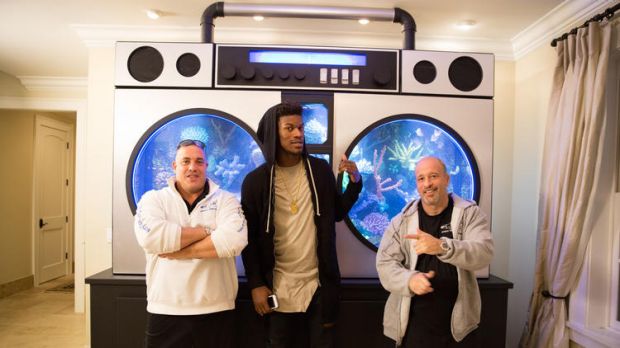 The guys from Animal Planet’s Tanked are at it again building some incredible celebrity fish tanks. This time they designed a special music themed fish tank for 26 year old Chicago Bulls star Jimmy Butler. Butler loves all genres of music and commissioned a special music themed tank to go inside of his River North Mansion, perhaps to celebrate signing his recent new contract on a five year deal with the Chicago Bulls, which will bring him in more than 90 million dollars. The Tanked stars designed a 600 gallon, boom box shaped fish tank to fit the order. The 6000 pound, 9 feet tall, 10 feet long, boom box shaped tank even actually plays music, which filters through the tank. “This is much better than I could’ve every imagined,” Butler said after seeing the creation in his entrance way. “I love it man. This is incredible.” Some special touches to the tank include using fifty fish to celebrate the Chicago Bulls 50th anniversary this season, and including a Jordan Tusk fish in the tank as a tribute to Michael Jordan. “That’s a BIG boom box,” Butler said, “I wish I could put it on my shoulder and walk around with it.” The episode airs Friday night on Animal Planet.