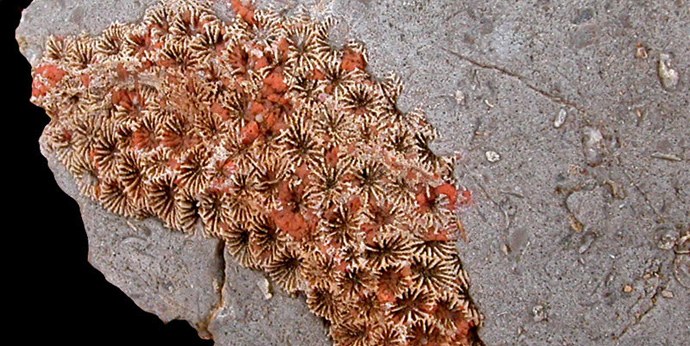 
Provided by the Geological Society of America:

Mass extinction events punctuate the evolution of marine environments, and recovery biotas paved the way for major biotic changes. Understanding the responses of marine organisms in the post-extinction recovery phase is paramount to gaining insight into the dynamics of these changes, many of which brought sweeping biotic reorganizations.

In the October issue of GSA Today, Montana Hodges and George Stanley Jr. of the University of Montana Paleontology Center report on coral recovery after the end-Triassic mass extinction event at the Triassic-Jurassic (T/J) mass extinction boundary. The authors examined Jurassic corals in a continuous depositional section of the Gabbs and Sunrise Formations near New York Canyon in west-central Nevada, USA.

Because Early Jurassic corals from North America are so rare, newly discovered occurrences are vital to understanding biotic responses in the post-mass extinction interval. In this paper, Hodges and Stanley make a preliminary report of the earliest Jurassic corals from the U.S., which are also some of the earliest in North America. These examples occur at New York Canyon in west-central Nevada’s Sunrise Formation.

This site has attracted international attention because it is among the best-documented T/J sections in North America. The coral occurrences in this section are near the T/J boundary, making the Nevada site ideal for understanding the dynamics of coral recovery and comparing them with the Tethys.

According to Hodges and Stanley, analysis of these corals fills a neglected but important part of the T/J recovery phase in North America, while lending support for an earlier opening of the Hispanic Corridor.