Just great. Damselfish are now found conspiring against corals too? 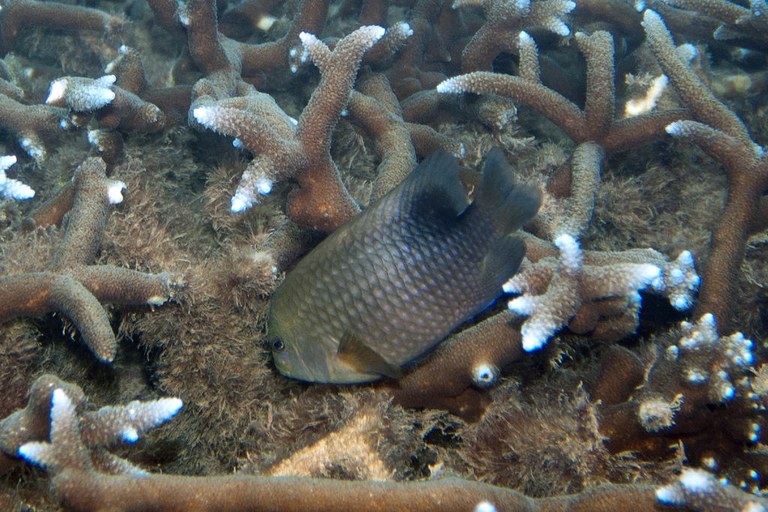 
If you need another reason to hate algae (or devilfish damselfish), here is some fodder.

There are many species of damselfish that farm microalgae.  That’s right.  Algae agriculture … by fish!  These industrious reef fish tend and prune fields of filamentous algae, with some species even going so far as to selectively weed out inedible algae.   Most damselfish will farm multiple algal species but some only farm a monoculture of the algae they most enjoy eating.   They’re terrific farmers and fiercely defend their prized crop from other herbivores.

The problem isn’t that damselfish attack corals.  Rather, it’s that their algal crop harbor microbes that significantly increase the prevalence of coral diseases such as black band disease.  Researchers studying Stegastes sp. damselfish at the Great Barrier Reef “revealed distinct bacterial communities associated with turf algae and a two to three times greater relative abundance of phylotypes with high sequence similarity to potential coral pathogens inside Stegastes‘s territories.”  In other words, algae-farming damsels increased the bacteria population linked to coral disease two to threefold by creating an environment which favor bacteria (the bed of algae).  Their farming activity changes the microfauna composition, akin to terrafarming but in a bad way.

And these damsels love to farm their algae fields under the cover of stony corals like Acropora spp. You see the problem.

This association is obviously nothing new.  Healthy coral reefs have dealt with this for millenia.  The problem is that many reefs are not healthy anymore, including (sadly) the Great Barrier Reef.  Algae-farming damselfish may tip the balance for some reefs already under natural and man-made pressures.