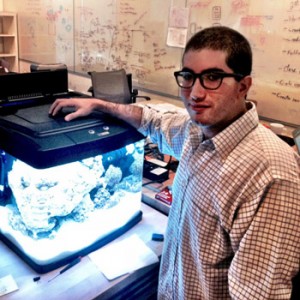 I finally had a chance to chat with Nathan Levine. Nathan is the founder of Current Labs and lead developer of Fishbit. Most of you have heard of Fishbit, the device that promises to be a sleek and simple way to monitor and control your aquarium.

Aquarists have been asking a lot of questions about Fishbit; is it just like the Neptune System’s Apex? Will it monitor nitrate? Will it have probes that need calibrated? How can an aquarium controller be made fool proof and simple? After chatting with Nathan, I’ve learned more about how Fishbit functions, and the developer’s goal behind this new product. While Fishbit is reminiscent of products currently on the market, the simple and aesthetic approach Current Labs is taking makes it something surprisingly different. 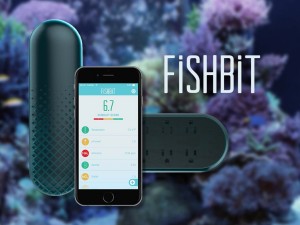 It’s not a myth really, but to understand the design philosophy behind Fishbit, it’s valuable to know what led Nathan Levine to consider such a device. He and his dad started keeping marine aquariums when he was a child, but eventually Nathan moved away to college. Without Nathan at home to take care of the tanks, his hobby sort of fell apart and needed placed on hold. He knew that technology existed that could monitor his tanks while he was away, but it was far beyond his father’s tech comfort zone.

When Nathan re-entered the hobby years later, a lot had changed. Controller technology had grown, but was still too complicated for someone like his father or mother to implement. That’s when he set out to design Fishbit. The expressed goal of Fishbit is to be an aquarium controller so simple to use, that every single aquarist can install one and reap the benefits of a fully-connected aquarium. Nathan’s personal goal is to ship a product that his father or mother could set up and use, which would remove a lot of the confusion that surrounds keeping a perfectly stable marine aquarium. 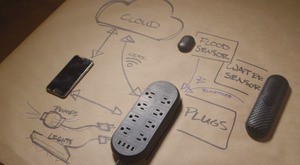 Fisbit isn’t a Neptune System’s Apex. I think a Mac vs. PC comparison works well here. Macs are very good systems for someone who wants an easy to use system with a simple graphic operating system. PCs can be simple to use, but they also allow technical users to pop the hood easily and pull all kinds of open source tricks.

In this comparison the apex is the PC, something that really is targeted to both technical users and those who want a basic level of control; you can code your own lighting schedules and toy around with technical features. Though, when it’s time to update firmware, you need to be handy with technology or you might hit a stumbling block.

The Fishbit is the Mac, meaning it offers a simple and straightforward approach to aquarium control. One aspect of Fishbit that is exciting for aquarists is the fact that it uses over the air, automatic firmware updates. This will allow firmware to update without forcing the aquarist to intervene – an update will download and install itself, and you won’t even know that it happened! When you log into Fishbit you’ll simply be notified that an update took place.

This kind of KISS (keep it simple stupid) philosophy surrounds everything about Fishbit.   Its automated system will eliminate much of the difficult-to-program aspects of current controllers, though users that want a more detailed level of control will find that option available as well.

Unfortunately, Fishbit won’t be equipped to monitor nitrate at this time. While Current Labs has looked into that possibility, right now it’s cost prohibitive – nitrate probes are expensive and notoriously difficult to use and calibrate. Nathan hopes that after Fishbit is released and begins to make money, Current Labs will be able to invest in researching and developing new technology (such as automated titration) to measure parameters such as nitrate. He will also look into optical monitoring technology, which could wirelessly sync up with the main unit.

What will it do? 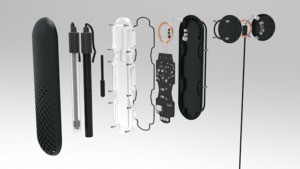 Right now Fishbit will monitor pH, temperature, and salinity – simple. Fishbit will also serve as a full-service controller; Nathan plans to program the device to aid aquarists as they install new equipment onto their tank. This could be as simple as telling an aquarist what a good lighting schedule is, or as detailed as taking an inventory of equipment installed on the tank and making suggestions.

Current Labs is focused right now on shipping a perfected Fisbit controller with vital functions, while looking into new technologies to implement in the future. Nathan’s goal is that any expansion to Fishbit will keep the simplicity theory alive, and be easy for aquarists to add and implement. 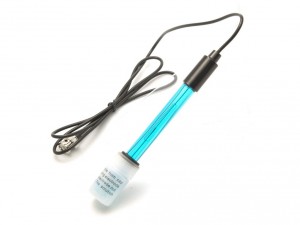 Like me, Nathan isn’t a fan of probes for measuring water chemistry; sadly, even for a device like Fishbit, probes are a reality. Fishbit is implementing a user-replaceable probe with a calibration option. If the aquarist is comfortable with calibration, they can simply calibrate their probe the same way they calibrate other devices, or, if they don’t want to calibrate, they can replace the probe when accuracy seems off-kilter. I am anxious to see how this works, as probes often need to be calibrated fairly regularly to remain accurate.

One downside multiple aquarists have noted of the Seneye aquarium monitor is having to replace a slide every 30 days. My assumption is that many aquarists would rather calibrate a probe themselves, rather than have to replace one each time they question accuracy.

Are the probes really just one big sleek device? 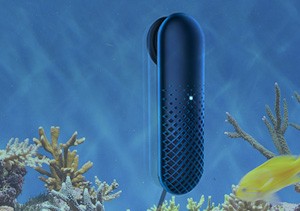 Current Labs doesn’t want Fishbit to look like a science experiment. To that end, they have put a lot of thought into the design of the monitor side of the unit. Instead of multiple probes snapped into probe mounts, with wires running here and there, Fishbit houses everything in one compact unit. Future add-on features will likely be housed in additional compact units, which will communicate with the central monitor wirelessly. This will all be accessible via Android devices, iOS devices and a web interface; making it both PC and MAC compatible, with everything synced and updated together.

Even though Fishbit is essentially a sum of its parts housed in a sleek case, this won’t prevent users from replacing various sensors. So if a temperature or pH probe fails, the aquarist won’t have to replace the entire device, just that one probe. 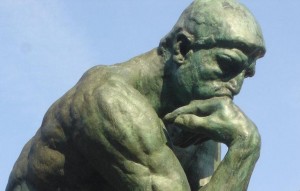 Will Fishbit be the aquarium world’s own Nest cam, a simple device that practically sets itself up and goes to work? It seems that if Nathan had his team at Current Labs have anything to say about it, it most certainly will. Nathan’s end goal is to see the number of aquarium controllers in use rise dramatically, and create a product that can help make anyone with the dream of a reef tank, capable of achieving it. Nathan also wants to create a product that isn’t something that aquarists “put-up with” but are excited to use and are confident about.

In my view, there is certainly room for Fishbit, Neptune Systems apex, and other controller technology at the marine aquarium hobby’s table. Technical users already have a champion in neptune Systems, and the ease of use of those controllers has evolved greatly over the years, along with improvements in web-based services. Fishbit seeks to broaden the range of controllers, and may appeal to a group of aquarist who before would never have considered a controller. This could be someone in a college dorm who has a nano-cube, or your baby boomer uncle who has set up his first tank, but can barely navigate Windows 10. Expectations for any new controller technology are high, and Current Labs is taking the time to get it right.