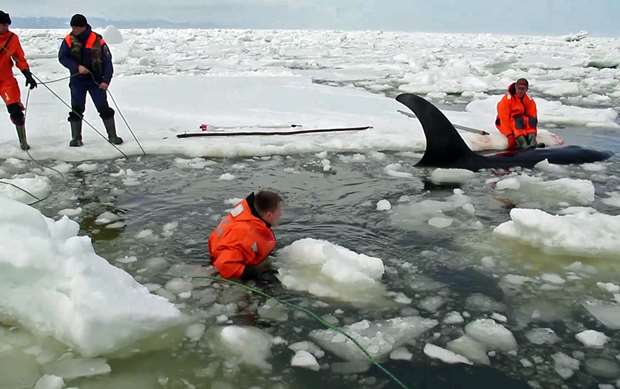 There has been a lot of negative publicity concerning Russia and orca whales recently, but this story of killer whale rescue is welcome positive news. Four killer whales, including a small calf, were trapped in ice off the coast of Eastern Russia, in the Sea of Okhotsk, off of Sakhalin Island. It is unclear how the whales became trapped, but it was probably due to a cold front coming in overnight, which prevented the whales from being able to reach deeper water. The bay where the orcas became stuck was shallow and filled with large rocks and ice, which made use of a traditional boat to access the whales impossible. The crew from the the Russian Emergencies Ministry (EMERCOM) had to use a rowboat to access the whales. Once the rescuers reached the whales, they began moving the ice chunks using hooks. Three of the smaller whales were able to get to deeper water on their own, once the ice was removed. However, the larger orca, measuring about 23 feet in length and nicknamed ‘Willie’ by the crew, needed more assistance in order to become free of the enclosure. The crews worked through the night, covering the whale with a tarp in order to keep heat in and continuing to move the ice. They also administered a shot of adrenaline and tended to its open wounds. Eventually, the larger whale reached open water and the rescue was successfully completed. MORE