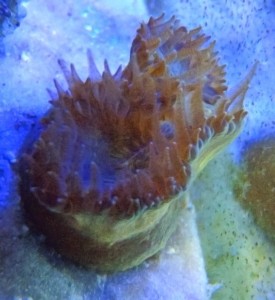 It’s not every day that you get to see the rare knuckle coral, and even less often that you get a chance to buy one. One of our sponsors, That Fish Place, has some in stock now, so don’t pass up this opportunity to get yours.

“The Walking Dendro is very new to the aquarium trade – only a few have every made it into the hobby so far. It resembles Whisker Corals (Dendrophyllia sp.) and Cup Corals (Balanophyllia sp.) but is actually a very different coral. The coral itself grows on one single head like the Cup Corals but is photosynthetic as opposed to the other two corals mentioned. It grows around a hole in its base where a worm species takes up residence. This worm gives the coral its “walking” reputation – as the worm moves around the tank, it takes the coral with it. The coral can however survive without its worm “transportation”.” -That Fish Place 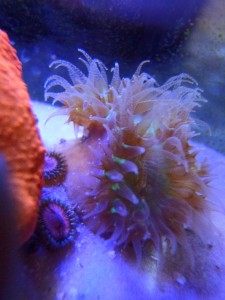 I’ve been lucky to come across a couple of these now and am still entertained every time I find them and study them. Both are kept in a 12 gallon JBJ nano tank, and even in there it’s always a hunt to see where they ran off to and what they’re up to. They have amazing coloration, and to date, have been very easy to take care of. The JBJ is upgraded with a Nano Customs LED retro, so lighting is increased quite a bit from stock. Feedings are very minimal in this little tank, because all that resides in it is a little sixline wrasse and trima goby. Knuckle corals are a great choice for beginners yet are more than interesting and rare enough for expert reef keepers.

They can be found for sale from That Fish Place at:http://www.thatpetplace.com/pet/prod/247446/product.web