At over 320 million acres, Le Parc Naturel de la Mer de Corail, or “the Natural Park of the Coral Sea,” in New Caledonia, a small island chain in the South Pacific, will be the largest protected area in the World. 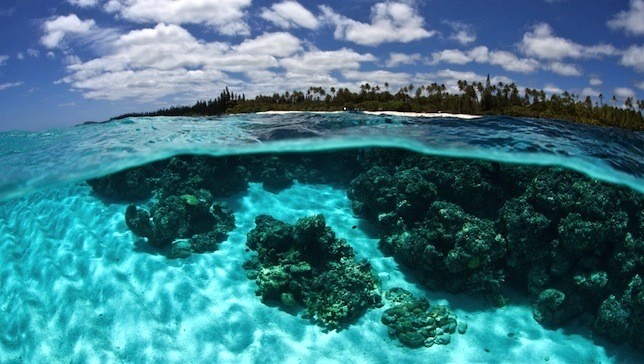 The preserve will contain over 1.1 million million acres of coral reefs, 25 species of marine mammals, 48 shark species, 19 species of nesting birds and five species of sea turtles. The Press Release from Conservation International is below:

May 1, 2014AT 1.3 MILLION KM2 — LARGER THAN ALASKA AND 3X THE SIZE OF GERMANY –  CONSERVATION INTERNATIONAL CELEBRATES HISTORIC LEGISLATION IN NEW CALEDONIA,  CREATING NATURAL PARK OF THE CORAL SEANoumea, New Caledonia / Arlington, Virginia, U.S. (1 May 2014) – An exemplary decision by the Government of New Caledonia to protect its natural wealth and create the world’s largest protected area on land or sea is a historic moment in marine conservation and sustainable development. In Noumea last week and by legislative decree, New Caledonia President Harold Martin and the French territory’s political leadership legally established theNatural Park of the Coral Sea (Le Parc Naturel de la Mer de Corail). The new law brings under careful management a multi-use, marine protected area which totals a massive 1.3 million km2, making it the largest protected area in the world. Essential to people, biodiversity and climate resilience, the park’s ecosystems generate around 2,500-3,000 tons of fish each year, providing food to New Caledonia’s quarter of a million people and an economic driver for the territory’s sustainable economy.“New Caledonians have always understood how much we depend upon nature – especially our oceans,” saidJean-Christophe Lefeuvre, Conservation International’s program director for New Caledonia. “The careful and thoughtful management of natural resources is essential to long-term human well-being. This legislation sends a powerful message that investing in the value nature can provide the basis for a healthy and sustainable society.”Located 2,000 miles east of Australia in the Pacific Ocean, the Natural Park of the Coral Sea covers all of New Caledonia’s Exclusive Economic Zone (EEZ), or, the marine waters extending 12 to 200 nautical miles from its coasts.  According to the International Union for the Conservation of Nature (IUCN), the park is home to more than 4500 km2 of fishery-supporting coral reefs, the deepest site in France (7919m. deep), 25 species of marine mammals, 48 shark species, 19 species of nesting birds and five species of marine turtles. It also increases French contributions toward the United Nations’ protection targets (UN Convention on Biological Diversity) for 2020 — from 4% of France’s national jurisdiction marine waters being protected, to 16% today — a remarkable and inspiring accomplishment.New Caledonia itself is the world’s only stand-alone Biodiversity Hotspot, and a French overseas territory, which is highly dependent on its natural capital. Its coastal waters boast the world’s largest lagoon, which has earned UNESCO World Heritage Site status.                         “This is a monumental decision for New Caledonia and the entire Pacific,” said David Emmett, Senior Vice-President for Conservation International’s program in the Asia-Pacific. “Such a measure exemplifies what other countries in the Pacific can do to fully invest in the long term health and productivity of their ocean resources.”  Plans to create the park were first announced in at the Pacific Island Forum in 2012, when the New Caledonia government offered its first official commitment to the Pacific Oceanscape. An unprecedented effort among 16 Pacific Island nations and 6 territories for collaborative management of nearly 40 million square kilometers of vital ocean, The Pacific Oceanscape represents 10% of the world’s total ocean surface.  Conservation International (CI) has had a presence in New Caledonia for more than 12 years, working at all levels to develop and implement integrated, sustainable solutions on land and at sea.  In 2013, CI facilitated the knowledge-sharing “sister site” agreement between New Caledonia and the Cook Islands Marine Park, which was declared in 2012 as a commitment to the Pacific Oceanscape. Over the next three years, Conservation International experts in New Caledonia and the region will help the government shape the park’s spatial planning and management plan, fund key scientific research to inform that plan, and integrate New Caledonia’s contributions within the Pacific Oceanscape and Big Ocean Network (www.bigoceanmanagers.org). The management plan will use best practices for integrated management and the protection of ecosystems, habitats and species. It will also strengthen monitoring strategies, preserving cultural values and work to increase international visibility. In the next phase of the park’s development, the levels of protection will be defined. Ultimately, the Natural Park of the Coral Sea will be a multiple use area with various zones for economic activity and conservation. MORE