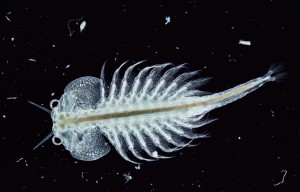 I wonder if my cat actually liked to swim if she could do the same? Mau loves a good game of “laser tag”. This intriguing study, brought to us via National Geographic, demonstrates how tiny little creatures like krill could play a sizable role in how our oceans’ seawater is actually mixed. When microscopic organisms like brine-shrimp (aka Sea-Monkeys) swarm together in massive groups, they are quite capable of influencing ocean currents. Think for a second on the blog I posted just other day about “Jet-Lagged Sea Plankton” – the diatoms are constantly migrating in cycles throughout the day – to and fro, from the deepest depths to the surface and plummeting back down again, perhaps controlled by a photosensitive release of melatonin. Now consider that they do this in masses – thick layers simultaneously bobbing up and down. Along with other natural influences on the current, such as wind and tides, could these swarms of collective animal movements be considered to have an impact on moving nutrients, heat and salt? John Dabiri, co-author of the study and engineer at Caltech in Pasadena, has been studying biological physics. Back in 2009 he examined viscosity-enhanced biogenic ocean mixing by studying the jellyfish, discovering that they are capable of moving water distances much greater than their body length simply by swimming. “This was the first hint that animals could transport water over distances much longer than their body size,” Dabiri stated. Along with fellow Caltech colleague, Monica Wilhelmus, Dabiri has gone ahead to extend these findings to vertically migrating animals, like the fore-mentioned Sea-Monkey. Since the brine shrimp are highly attracted to light, it was fairly simple to entice them with lasers to mimic their migration patterns.

The jet of water the animals produced behind them as they swam was moving faster than the surrounding water, says Dabiri. The edges of that “fast lane” snagged on the edges of the surrounding slower water, creating swirls and eddies known as Kelvin-Helmholtz instabilities.

Those swirls were much larger than the animals—which are half an inch (15 millimeters) long as adults—the researchers report Tuesday in the journal Physics of Fluids. The finding suggests that much larger groups of plankton could mix seawater by creating currents as they swim, Dabiri says.

See? Even those of the minute stature are capable of having a mountainous impact in the world. Read up more on the study at nationalgeographic.com, as well as a few words from neigh-sayers who have their doubts about the study’s findings. In the meantime, I’m going to grab my laser pointer, my cat, and a bucket of water to see if I can switch out my pump as a mechanism for mixing my saltwater for water changes. 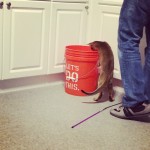