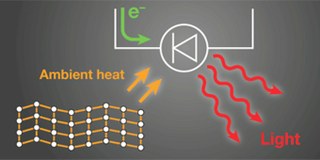 Heat can be converted into light at low wattages.


Researchers Santhanam, Gray,Jr. and Ram explain how in their paper “Thermoelectrically Pumped Light-Emitting Diodes Operating above Unity Efficiency” which was recently published in the journal Physical Review Letters.

How did they do it? It has to do with how the researchers applied the voltage to an LED at a given ambient temperature.

In order to achieve this greater than 100% efficiency, the researchers had to drop the power input to the LED into the picowatt range (10-12 watts) and warm the ambient air temperature.  At 30 picowatts of input power and 135 C ambient temperature Santhanam and others measured 69 picowatts of light — a 230% increase. Where was this added input power coming from?  The ambient air temperature. What happens is that at these low power levels the LED actually absorbs heat from the environment and re-emits this heat as light. Thus the LED should be slightly cooled compared to the ambient temperature.

While this technology won’t be lighting your tank any time soon, it is a cool concept — using the excess heat from your tank to make your LEDs more efficient.