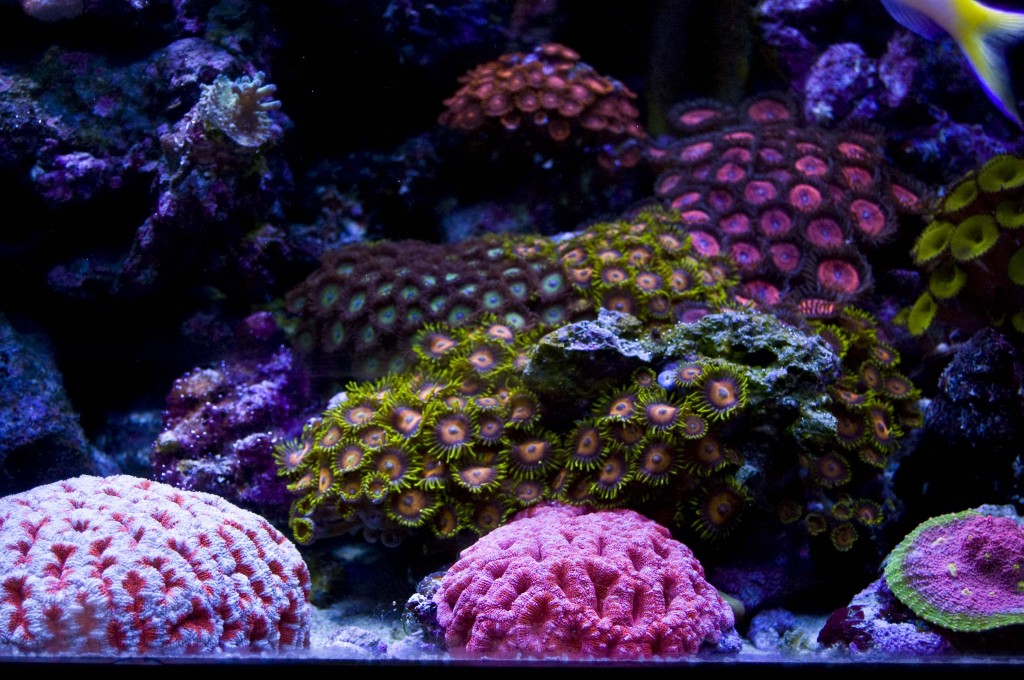 The starting point with a captive reef aquarium can be the most difficult part of the equation.  Often times the beginner starts with corals that are the most sensitive and demanding which lends to a higher failure rate.  Choosing the correct animals at the gate can be as important as the system they will reside in.  The corals in the image are some of the less demanding specimens.  The Zoantharia and larger polyp stoney corals will require less light and can stand higher nutrient loads.  The stoney corals such as Acropora species and smaller polyp stoney corals require more stability in minerals as well as higher light and lower nutrients.  Although it is best to understand sea water chemistry to keep any reef aquarium biotype, starting with the correct corals can mean the difference between success and failure.  Testing alkalinity, calcium and magnesium and keeping these in range is a good idea in any case.  This and paying attention to the more common parameters goes without saying.  Something as elementary as temperature and specific gravity is a necessity.  I tend to suggest steering away from certain species until a reef aquarium is mature.  This may take a year in certain instances.  A good indicator is strong coralline growth and  strong growth with the less demanding corals.  The beauty of the less demanding corals is no less then the latter and bring much appeal to the aquarium.  Patience is a key factor with a captive coral reef.  Taking some time in choosing the animals at start up should be paramount.  These corals are less demanding but obviously no less beautiful.