Let’s Get Right Into It – Real Life Palytoxin Tales

So my Social Media Circle was quite generous to me today when I reached out and asked for any personal experience with the deadly Palytoxin we are faced with when dealing with some of our reefs. My take on the  output? People are very confused – mistaking bacterial infections for the neurotoxin. Take note – “streaking” is blood poisoning which is a huge indicator for bacteria. No biggie, we all get misdirected at times, but for your safety as an aquarist it’s still important to recognize the symptoms. Not unlike the flu, nausea, vomiting, chills, fever, the works. Go to a hospital. But let’s take some time to visit your personal stories with the dangerous polyps. Warning: the following images are somewhat graphic. I hope you all take this as a stark reminder to protect yourself when dealing with lethal species. Unfortunately, again in warning, these stories don’t all have happily ever afters…
From a good friend of mine, Jeff Saurwein:

A couple of years ago, I was fragging  a small colony of Nuclear Green Palythoas (Palys) at work with a bandsaw.  I had taken the common precautions of wearing gloves and eye protection.  After 5 or 10 mins, I started sneezing and caughing.  After 15 minutes, I started having trouble breathing. Being a common sufferer of allergies, I brushed it off and thought my allergies were getting the best of me and decided to head home to get away from what was irritating me.  After I ate dinner and took a shower, I started getting cold sweats and severe muscle aches that started in my lower back and eventually spread to most of my upper body. The closest thing I can compare it to would be flu like symptoms minus the vomiting. This went on for approximately 12 hours.  After an awful nights sleep, I woke up the following morning feeling like I spent the entire night in a hot yoga studio.  After doing some reading, I determined the palytoxin had gotten into the water used in the band saw.  When the band saw blade rotated, it created a fine mist that I enhaled.  This caused the initial respiratory response I experienced.  I had forgone using a mask as I had never thought about the palytoxin spreading out into the air in that way.  After my experience, everyone fragging zoanthids and Palythoas was required to wear gloves, protective eye wear and a mask.  I’ve been in the hobby for 16 years and at the time worked in the industry for 15.  I’m the president of the local marine aquarium society.  I’m a perfect example that even the most experienced aquarist can make mistakes.  This is a perfect that this hobby is a constant learning experience.

Lesson here? Don’t mistake experience and time served for immunity. Next up is from Dan Rigle, a resident blogger here at Reefs: 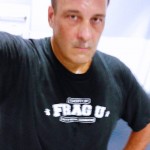 I’ve been poisoned quite a few times. Worst was when I vaporized a protopaly with a tile saw and inhaled the mist. Had a rough 24 hours with respiratory distress, chills, fever, seizure type involuntary muscle movements, etc. I’ve been injected in the hands numerous times with small cuts being exposed to palythoa slime when fragging also.swollen hands. Numbness and nausea with headaches is the typical. Also ingested some palytoxin while biting super glue off my fingers that had some paly slime trapped inside.  treat any exposure with benedryl and if in a cut or lesion I use a polysporin or the like . Some specific polyps have a much harder punch then others and symptoms seem to vary from various different type of polyps but generally the large types seem the worst.

That sounds super unpleasant to say the least. Glad to hear Dan suffers no lasting effects from his numerous exposures. Let’s visit a nearly fatal story courtesy of Reefcentral:

Tommy (Tcat3rd) almost died Wednesday evening after being exposed to the deadly Palytoxin from zoanthids left overnight in a bucket. The zoo’s were half dead from leaving them overnight in a bucket so he decided to clean the rocks off in his utility tub with hot water and scrubbing them. He was full aware of the danger of the toxin, he used eye protection and full length gloves to clean the rocks. What he didn’t protect was his lungs, the hot water and steam from the water made the toxin airborne. After 20 minutes of cleaning the rocks he went up stairs, feeling sick to his stomach. after another half hour passed he was ready to head to the emergency room but before he left he printed out articles on the toxin to take with him. In the waiting room he became almost paralyzed and started to cough up blood, his lungs were filling up with blood as well. The doctors treated him with everything they could think of and were getting results, they called in the priest for last rights that evening and didn’t think he’d make it through the night. Thursday morning they continued massive treatments of antibiotics and steroids with little improvement. Today he’s on his way back from his death bed and will be in the hospital for days to run tests and monitor his progress. We wanted me to post up to let everyone know and to remind them the dangers of our tanks. Thoughts and prayers go out to Tommy and his family, which also got sick from the toxin just not as bad as Tommy did being in closer range to the steam.


Scary stuff right there. Let’s visit a rather horrifying story from a woman who got the toxin IN HER EYE! Ugh. I can’t even imagine: 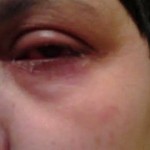 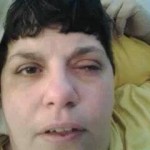 I was working in fish store and we had a great sale on paly rocks. Right before I got off I sold like 3 of them. I purchased one and took it home. When i got home I dipped it and placed it in my tank I must have not washed my hands and then rubbed my eye. When i went to bed I was fine I woke up at two in morning feeling like someone stabbed me in both eyes. The pain just got worse so I went to the ER. My left eye was draining and red. Luckily my doctor listened to me and contacted specialists. They irrigated my eye with litters of saline and transferred me to another hospital where they further irrigated and put me on ABX. By this time I also had bad flu symptoms and red streaks down face. My vision was 20/70. I went home and next day my cornea turned completeky white and i had absolutely no vision in it what so ever. I saw one doctor who thought i had an ameoba in my eye and sent me to corneal specialist. My cornea was basically ate away. I had hourly eye drops and abx and pain pills. I saw doctor everyday for 2 weeks then every couple days after that. My eye wasnt healing properly and they thought they were going to sew eye shut, however, by about third week it started slight improvement. I was on steroids for four months along with eye drops. Worst pain ever. There was talk about corneal transplant still but i am holding off. Today is 2 years since injury and i have limited vision in eye. Luckily cornea tissue regenerates fast and my vision is basically like looking through vasoline. My dr wrote paper on this and he might be willing to talk even. I will try to find pictures. Please let me kn o wbwhat else is needed. I am always happy to talk about this in hopes nobody else has to go through this”

As god awful as the above story is, evidence points to a bacterial infection due to the streaking. I’d be curious to hear from her acting doctor, and will be contacting him as he wrote a paper on the whole debacle. Last but far from least, the last story is pretty damn sad. This comes to us courtesy of Mr. Saurwein once again. “Scuba” an adorable, gleeful little Boston Terrier who was loved immensely, met his fate when he decided to utilize some tank water and a refreshing beverage. Warning – this doesn’t end well. 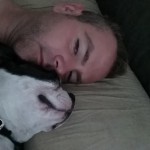 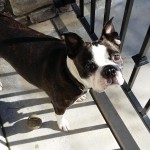 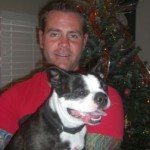 It’s with great regret that I have to write this.  We’ve all heard the close calls of a reefer getting sick from palytoxin poisoning.  Last year a story went viral on the aquarium forums about a reefer boiling his rocks with Palys on them to kill them.  What happened shortly after was an entire family, including the dog getting extremely sick.  Unfortunately in this case, it isn’t about a close call.  A few days ago a friend of mine was working on his tank to rid the tank of those ugly brown Palys we all hate.  At some point during the cleaning and reworking of the tank, his dog got into some water that the palys had been sitting in.  Shortly after, the dog started to exhibit signs of acute palytoxin poisoning.  Within an hour his dog passed away.  I spoke with the owner of the dog and aquarium and we both agreed that we wanted to get this awful story out to help prevent this from occurring again.  Stephen Sullivan (scubasteve) lost Scuba, his 6 year old 31 pound Boston Terrier.  For those of you who know Stephen, you know that Scuba meant the world to him.  On July 24th Stephen posted a photo with the following caption on facebook, “ RIP.  Scuba died last night.  He ate some of the coral from the tank.  I was giving him CPR while he died in my arms.  I lost my best friend and my biggest love.”  After reading through all the comments it became pretty clear, Scuba impacted a lot of people and was an incredible dog.   Stephen wanted this story to not only honor his buddy but help educate people about coral safety.

I’d really urge everyone reading this to better educate themselves about the coral that call their tank home.  Many of the coral we keep produce some form of toxin or another to help defend themselves against other coral and predation.  Most of the toxins are completely harmless to humans but a few are not.  The two most commonly kept corals in the aquarium industry happen to be the two most dangerous when it comes to toxicity.  Zoanthids and Palythoas, more commonly referred to as Zoas and Palys, are small Cnidarians that have become hugely popular in the last 10 years.  Some reefers will shell out over a thousand dollars for a single polyp.  Little do they know that they are housing something with the capability of killing them.

This subject has been covered here at Reefs before, but I’d like to instill a friendly reminder as it’s a pertinent subject. I’d also like to post this in honor of little Scuba, and all of us at Reefs.com pay our respect to the precious little man that was taken too soon. A harsh reminder of just how deadly the creatures of the deep can be.