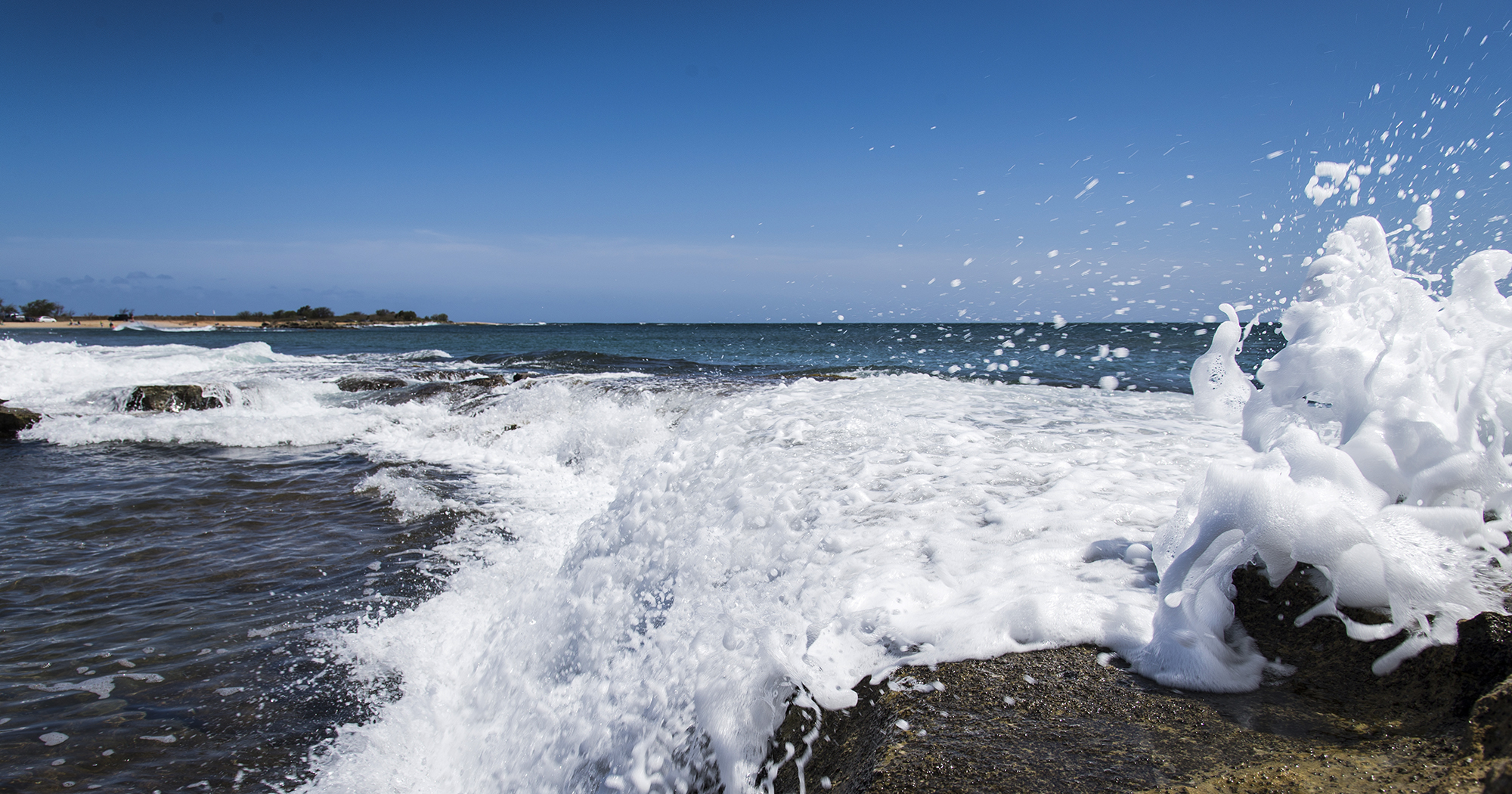 If you happen to be the owner of a reef aquarium hosting live corals, there’s a good chance you also own a powerhead. If you don’t, well, you better get one (or two, or more…) because there is no reef tank on this planet that looks good without proper water circulation. You simply can’t keep a reef-dwelling coral for long if you don’t provide it with enough oxygen transporting flow. Some corals like more, some less, but all need the “artificial” current a propeller pump creates in order to survive.

I remember coming from a freshwater background into reefing and being amazed at how much flow was needed to keep corals alive, compared to the planted tank I used to own. In my planted tank days, I didn’t even own a powerhead until much later (a single Koralia as in the picture below), all my flow needs were met by duo canister filters, their outlets located at the opposite rear corners of the 75g, plant infested underwater jungle. With a reef tank, powerheads not only keep the rocks clean of ammonia-producing detritus while giving corals a chance to catch their dinner, but most importantly, they create water movement that is essential for gas exchange in the environment, in turn providing corals with oxygen to respire. 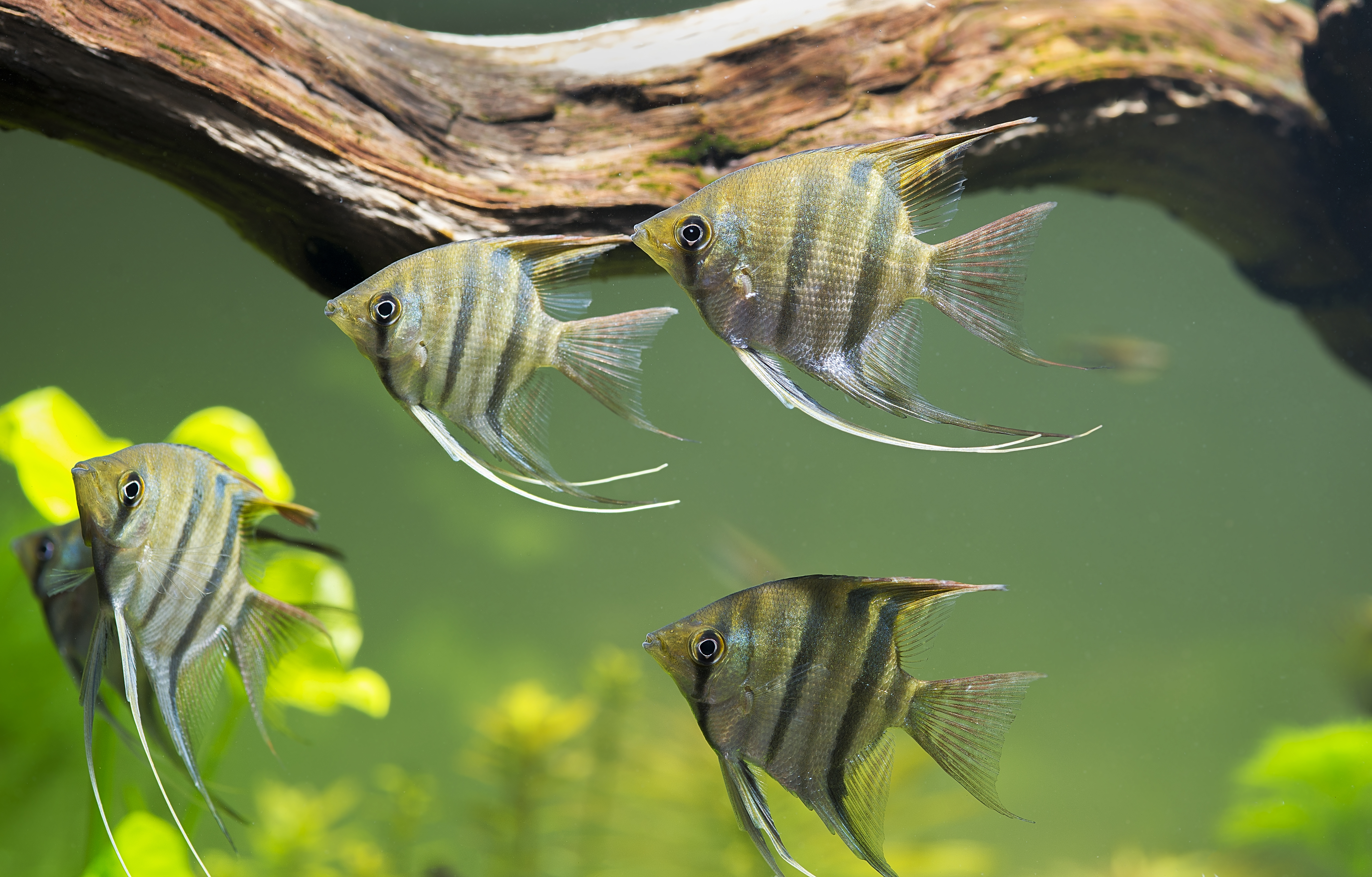 In a typical reef tank of yesteryear, the so-called closed loop systems played the role of wave making devices. One, or preferably multiple, water pumps were plumbed within the display aquarium and plugged into a switching power bar, or wavemaker if you will (remember those Aquarium Systems Natural Wave Wavemakers?) which turned them on/off at pre-programmed intervals, providing multiple points of short-time bursts of jet-like flow in various areas of the tank. To this day, some people incorporate closed loops into their systems, especially folks in the large to very large tank owners bracket, but for most of us, this method of flow-making became pretty much obsolete overnight when the first true powerheads entered the market. 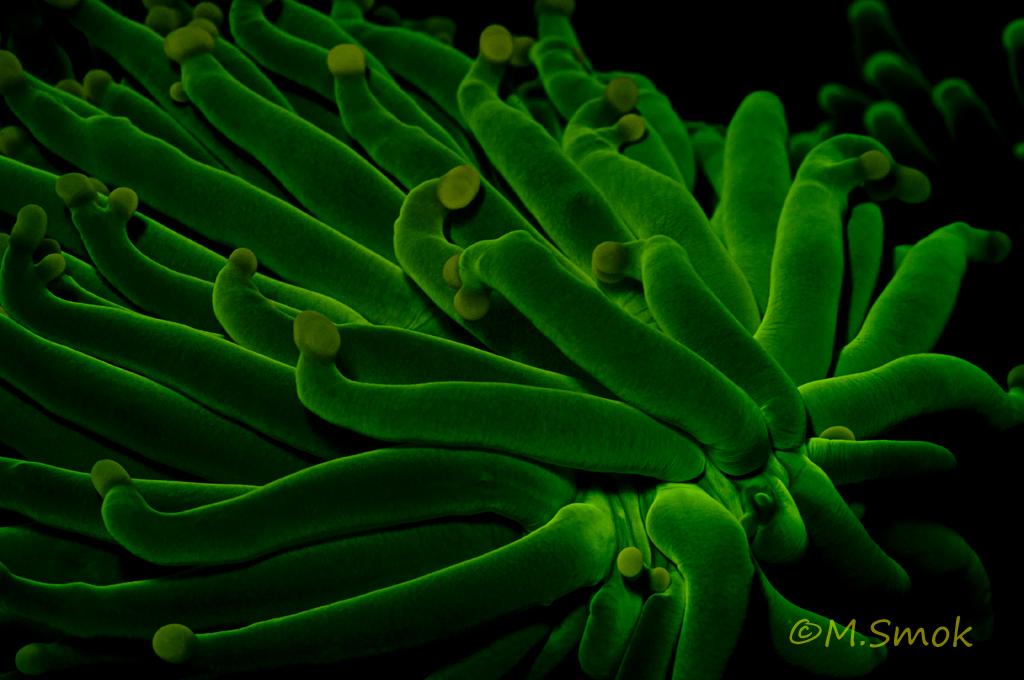 A loose definition of a powerhead (loose because the standard design has been challenged with success on numerous occasions), otherwise known as a wavemaker, a wave pump, or a propeller pump, is that it is a type of submersible pump that transfers the energy of the motor by pushing, or propelling, the fluid outwards from the center of its rotation by means of a cylindrical impeller designed to move large amounts of water using a small amount of electrical energy. This design sacrifices head pressure (which is not needed anyway) for performance.

IMPELLERS THAT CHANGED THE WORLD 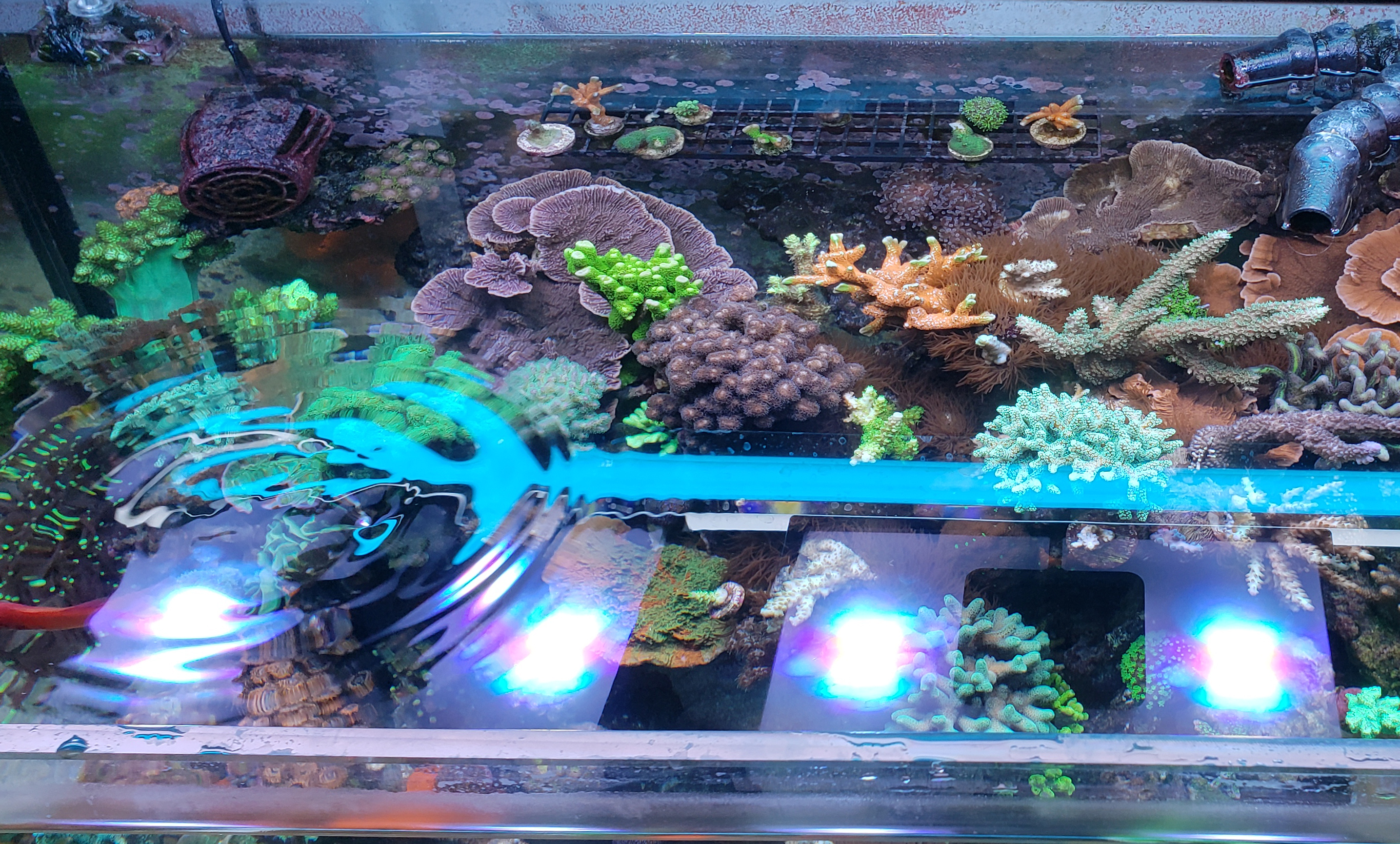 I will be discussing the topic of flow in details in the second part of this article, today I would like to focus on something else. I’m taking a trip in time to showcase some of the advancements and changes propeller pumps underwent over the years by presenting products that, in my mind, changed the way we look at creating flow in a reef tank. This list is incomplete as it mainly focuses on the last decade of wavemaker history, the one I have enough knowledge about to throw in my 2 cents, but I also feel like this period saw radical changes in the design and functionality of propeller pumps. I’m sure there were some well-thought-of devices before my time in the hobby, but I wouldn’t remember them anyway. Oh well… 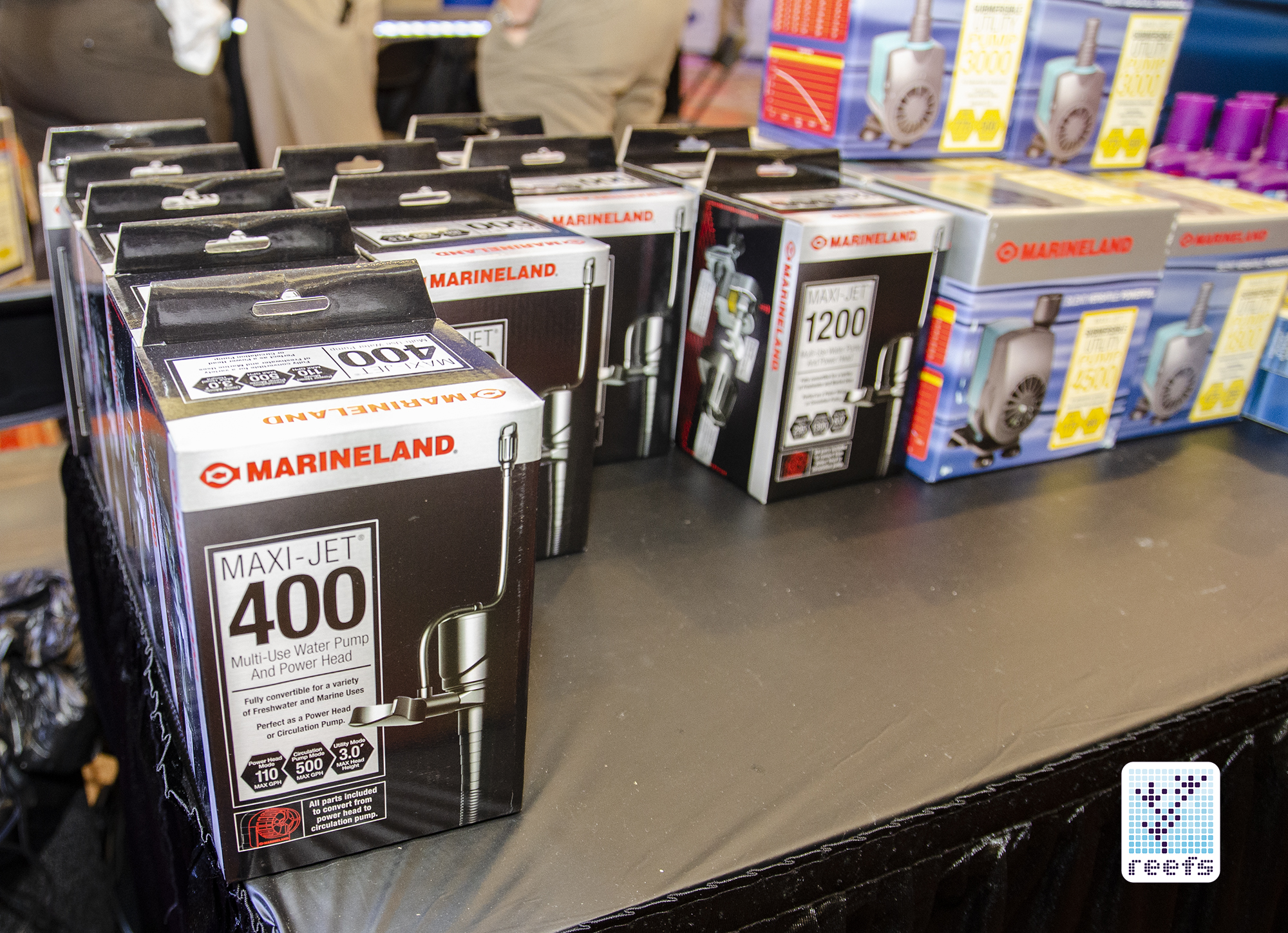 I feel obligated to start the list with a machine that was mine and probably most of the readers’ first encounter with something resembling a modern propeller pump. While it can barely pass as one today, in the early two thousands Marineland Maxi-Jet was the king of flow. Sold as a kit consisting of a small centrifugal pump with a strainer/filter on the intake and a directional nozzle on the outlet, Maxi-Jet is basically an ordinary submersible pump turned on its side, where the intake, armed with a strainer preventing the fish from becoming fish food, and the outlet fitted with wide narrow nozzle serve together as the actual wavemaker. The pump attaches to the glass by means of a hanger or a trio of suction cups on a bracket. Marineland still sells tons of them, and for a good reason- they are dirt cheap multi-functional workhorses. I still use one to mix my saltwater and it’s been with me for the last 8 years, if not more. 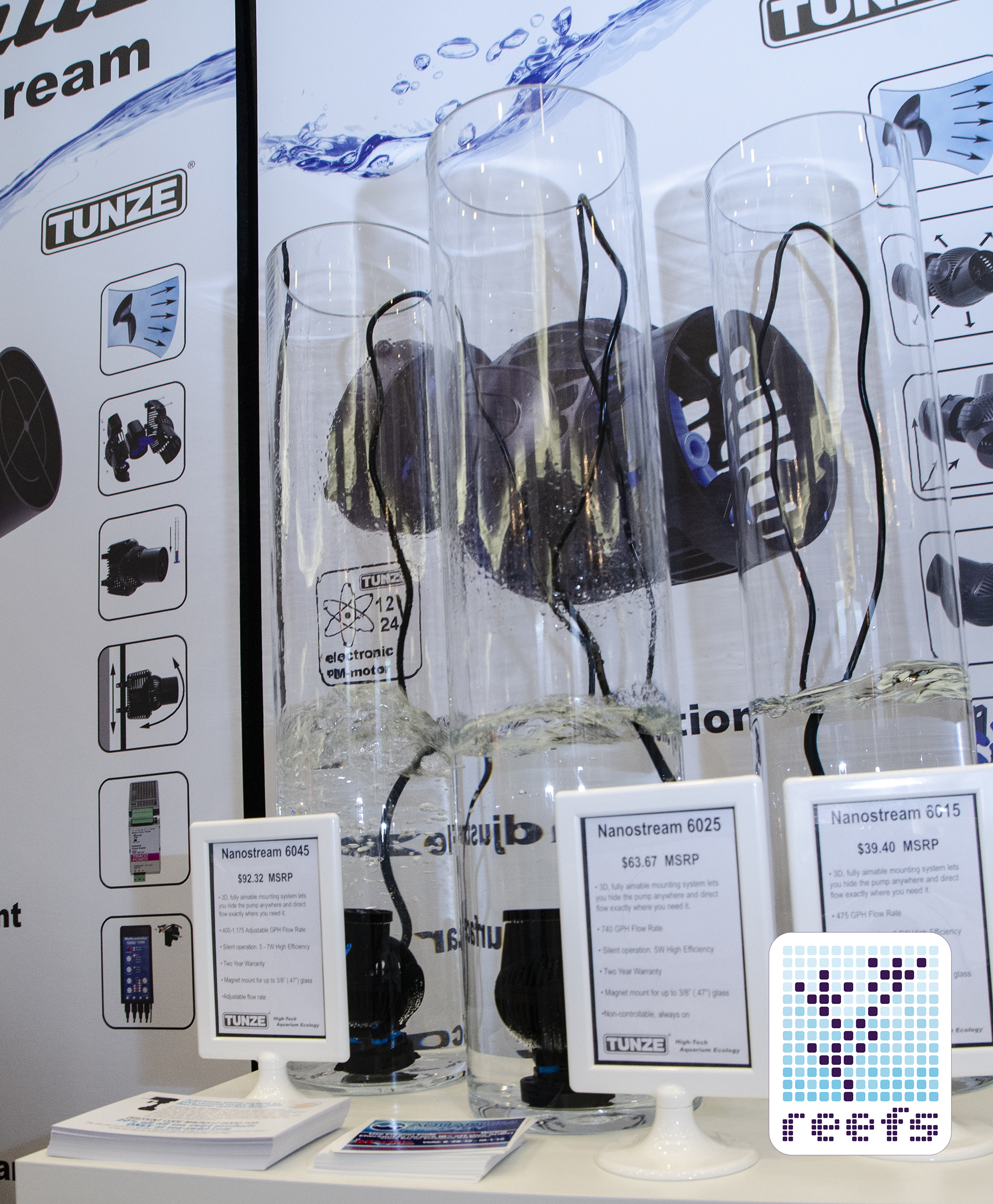 tunze cemented its place in reefkeeping history as the true grandfather of propeller pumps when they introduced their first Turbelle Stream model, the 6100, in the early 2000s. It had everything a wavemaker should have- a DC powered, centrally located motor with an impeller that pushes water out of itself, a swiveling head, and a magnetic mount that later revolutionized the way we could position wavemakers in the aquarium. The model that came after it, the 6105, was an even bigger hit, and to this day Turbelle Stream wavemakers serve thousands of aquarists all around the globe. I still remember it as one of the very few all-time favorites of mine. Tunze’s latest installments were not as exciting as they used to be, but hopefully, we’ll see something new from this legendary company in the future (MACNA?). 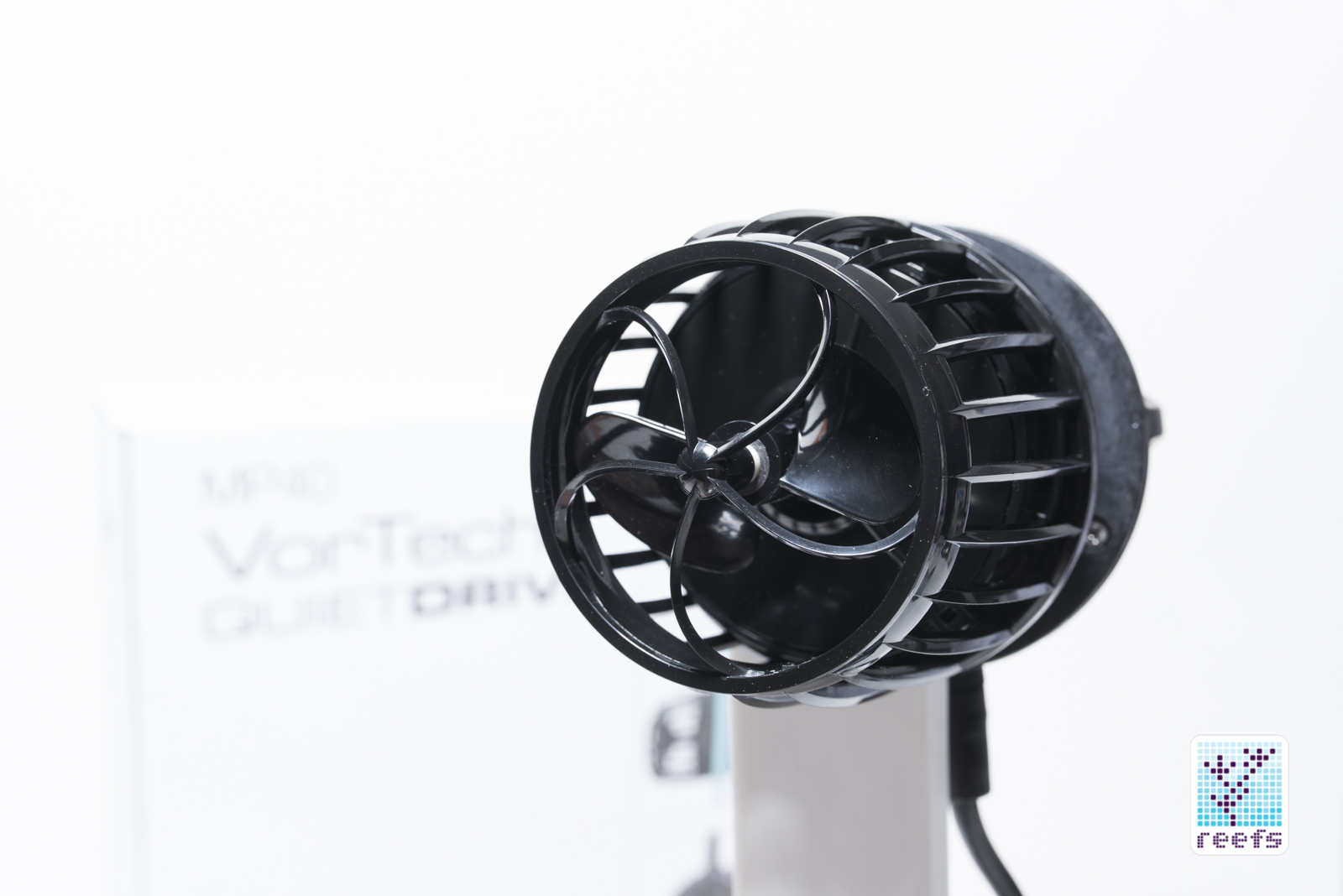 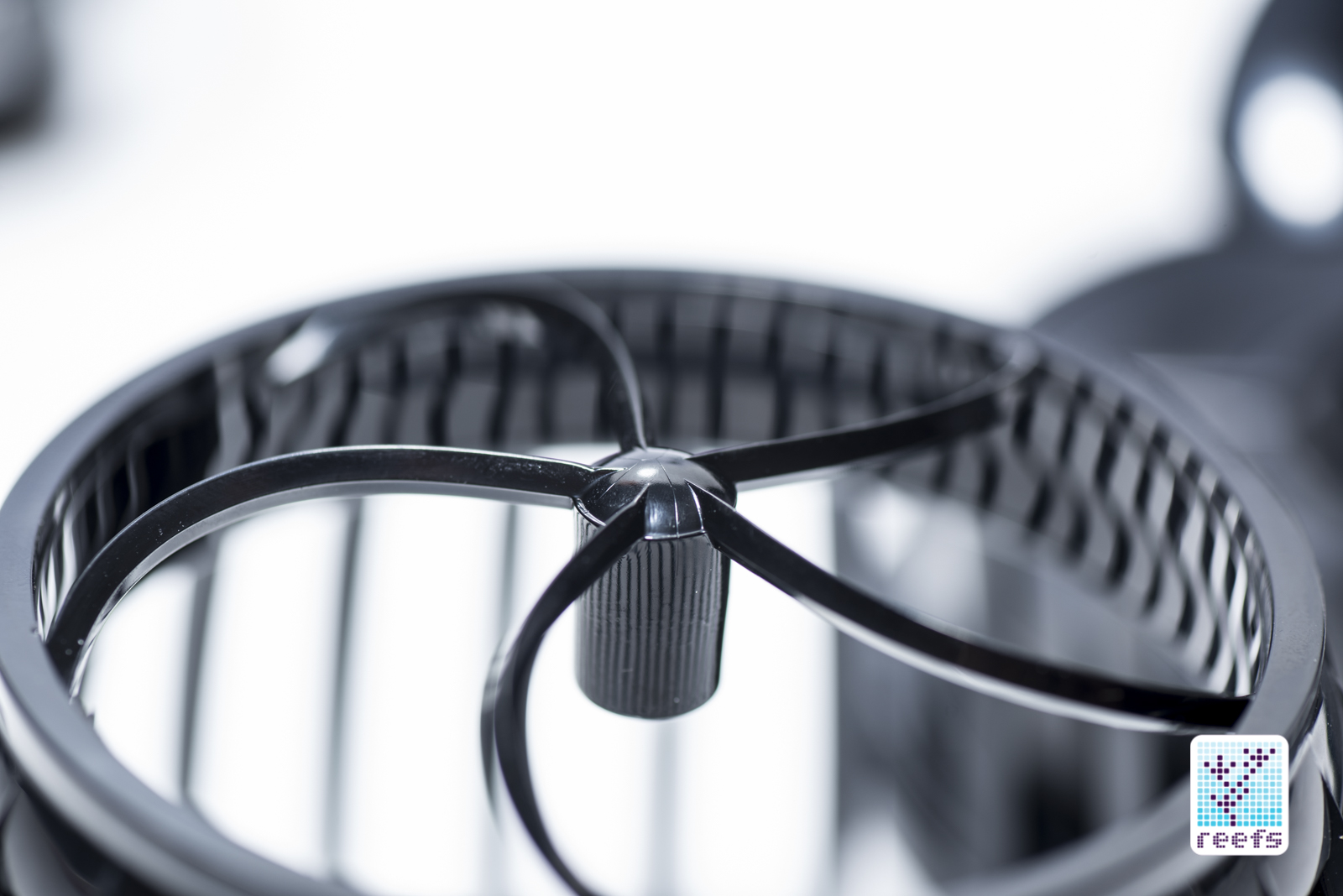 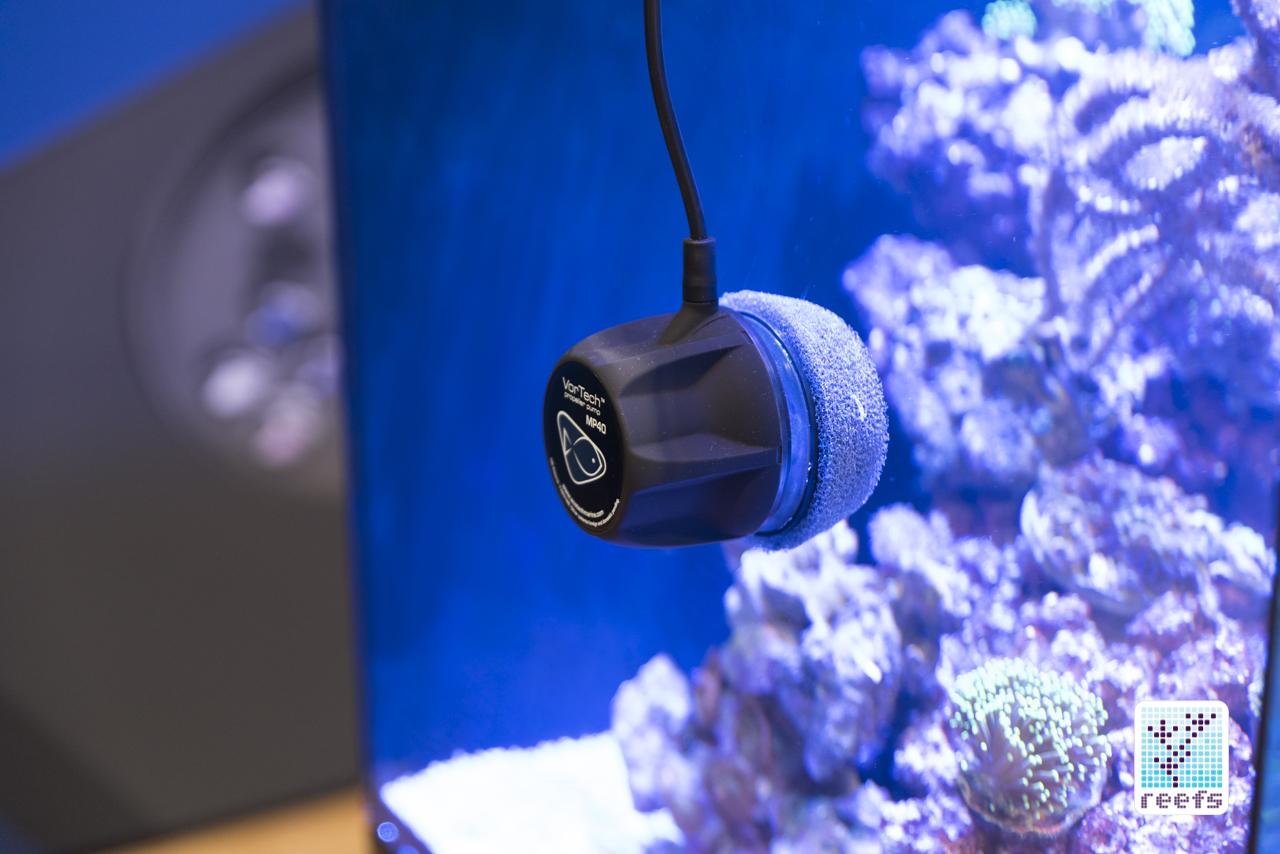 Ecotech introduced the vortech propeller pump in 2005 to an audience of unexpecting aquarists used to having the entirety of their powerheads inside the tank. Few suspected that you can take the motor, complete with all the electronic components, and put it outside the aquarium, leaving only the electrically uncoupled impeller assembly submerged. Yet Ecotech, in a gravity-defying way, did just that. vortech’s ingenious design allowed Ecotech engineers to build a pump that transfers the kinetic energy of a pair of spinning magnets through the aquarium glass that also doubled as a magnetic holder for the two sides. The so-called “dry side” of the powerhead is hooked up to a perfectly executed, both in design and functionality, controller. There is a dial to control the speed, a three button layout, and an LED ring, oh it was so easy to learn that pump. Ecotech created a legend, a product that to this day remains unchallenged and in a category of its own. The newest models are much quieter, more energy efficient, and better-looking. Truly remarkable pumps… 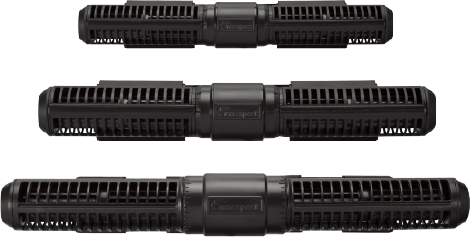 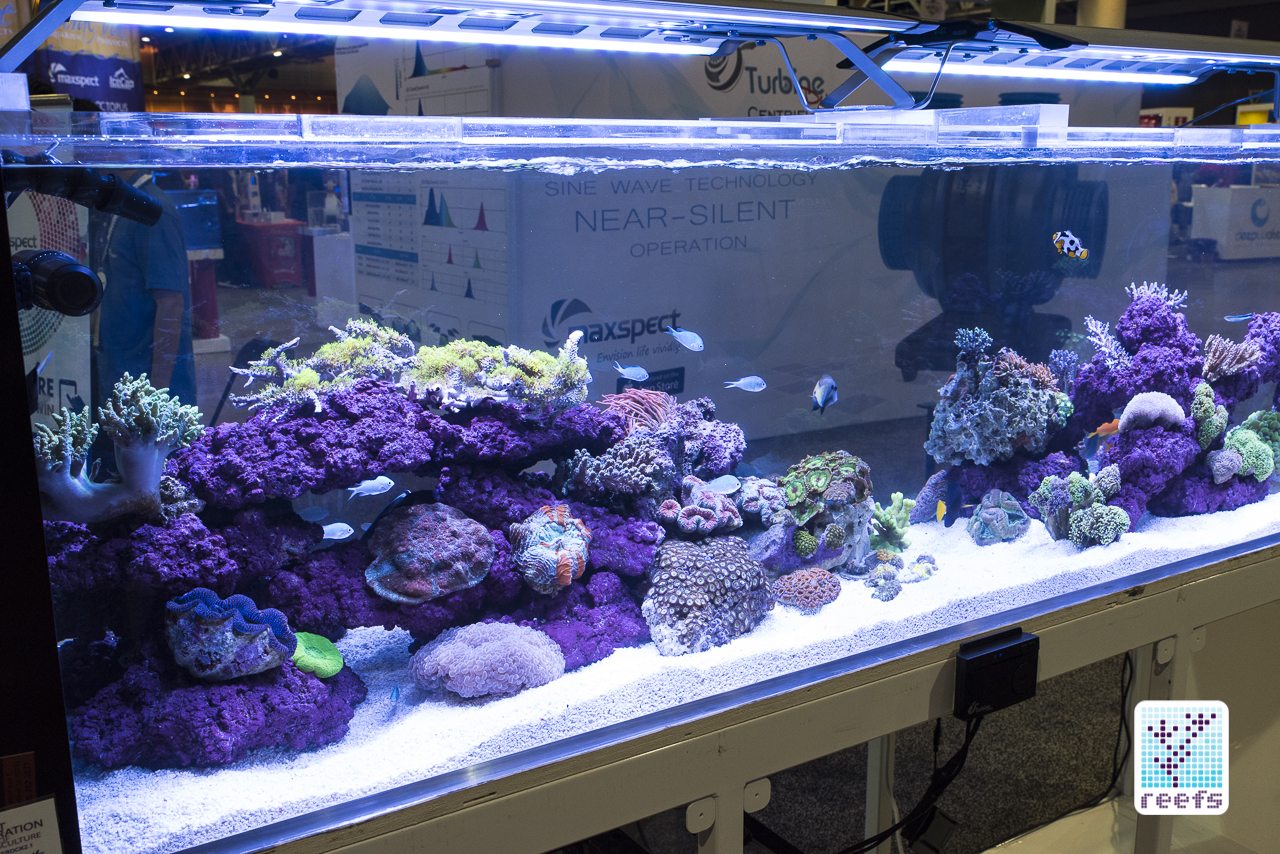 Introduced in late 2013, Gyre pump from Maxspect did something that few people thought was possible-it brought something fresh to the world of propeller pumps. The long, cigar-shaped body of the Gyre has a motor assembly in the center and two long impellers coming off its sides. That design allows the pump to move massive “sheets” of water all at once, something a traditional powerhead is not capable of replicating. Two of these wavemakers working together through a controller can create a recirculating all-tank water movement aquarists now call simply the Gyre. I personally never had first-hand experience with the Gyre, but anyone I know that has, swears by their effectiveness in creating massive flow in their tanks. There’s something to it I think. 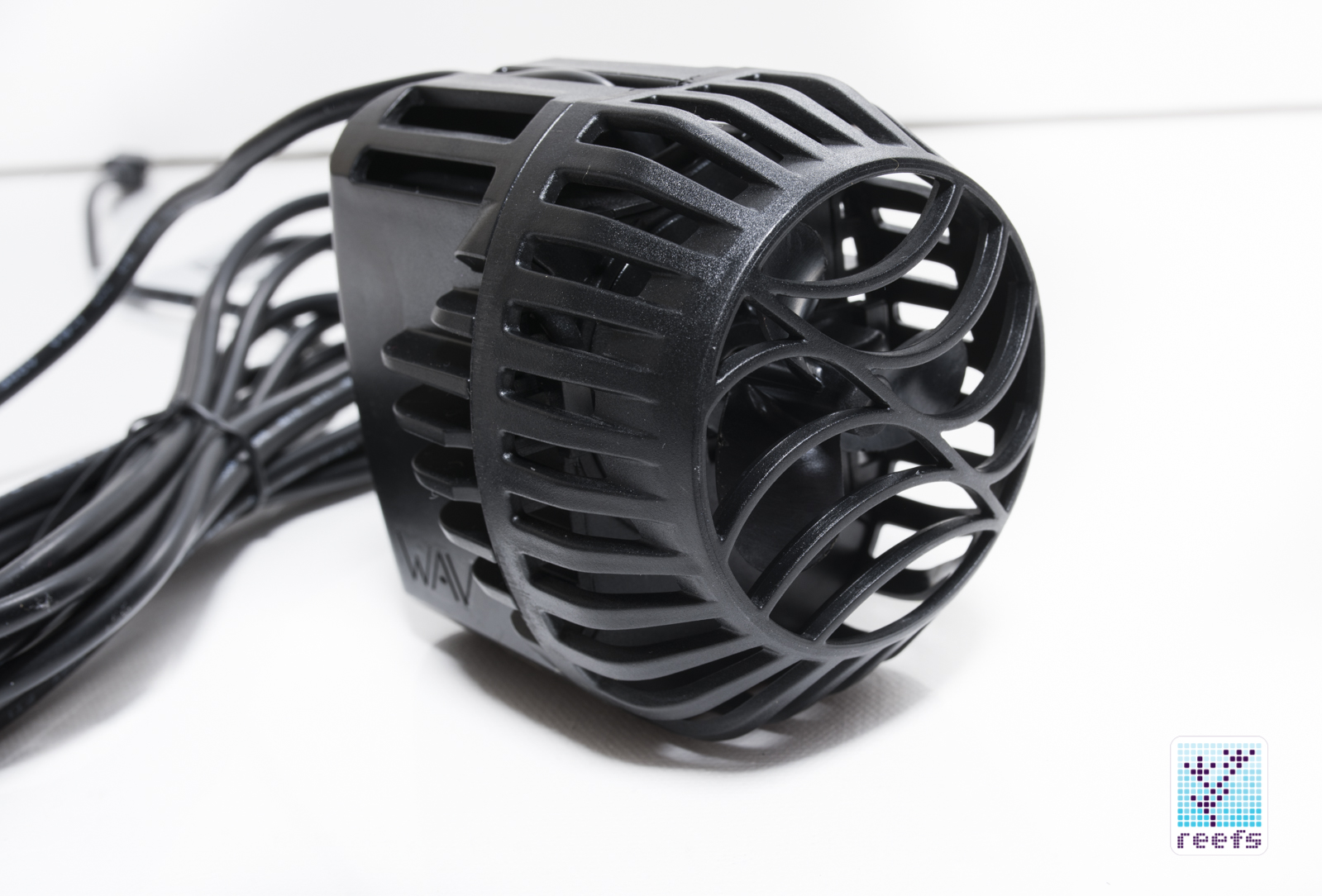 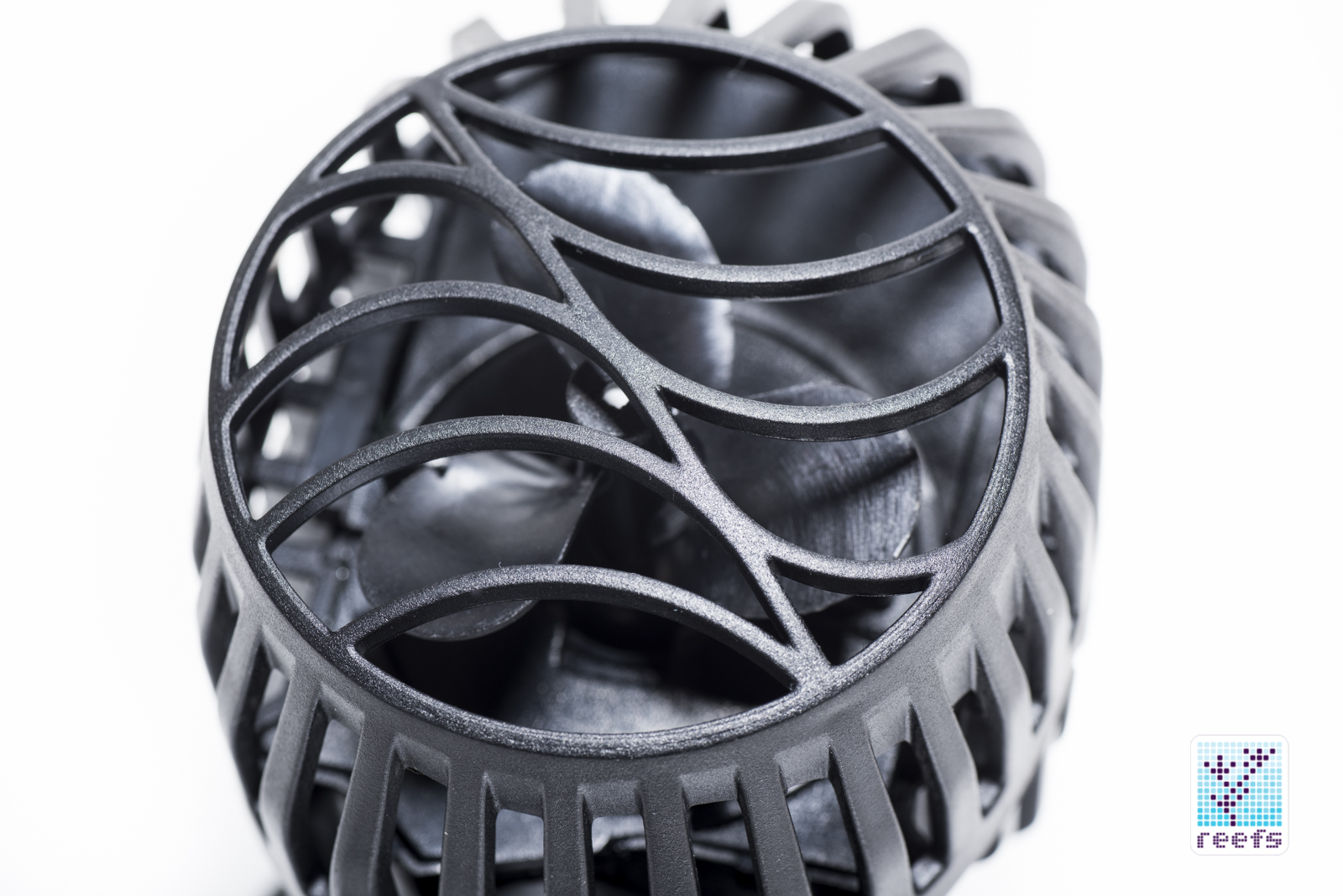 In 2016 Neptune Systems, the company behind the widely popular apex Controller, entered the wavemaker game with an in-house product called the WAV. At first glance, there was nothing revolutionary about the pump, but a few years later it still sits in a unique niche it created for itself. Primarily, it’s the only powerhead on the market fully integrated with the controller it was designed for, the apex. The newest apex Controller can provide power and control to the WAV using only one wire. No power supplies, no ports for drivers, just one connection with the 2016 apex. Then comes the built-in safeguards, like the heat sensor and the proximity sensors that prevent the pump from dying prematurely. Finally, WAV may not be the slickest looking wave making devices, but what it lacks in looks, it makes up for in sheer power. In my experience with various pumps, nothing can match the amount of flow WAV generates (for its size), all while being virtually noiseless. WAV is my current pump of choice and it’s been going strong since I got it, the same week it came out. 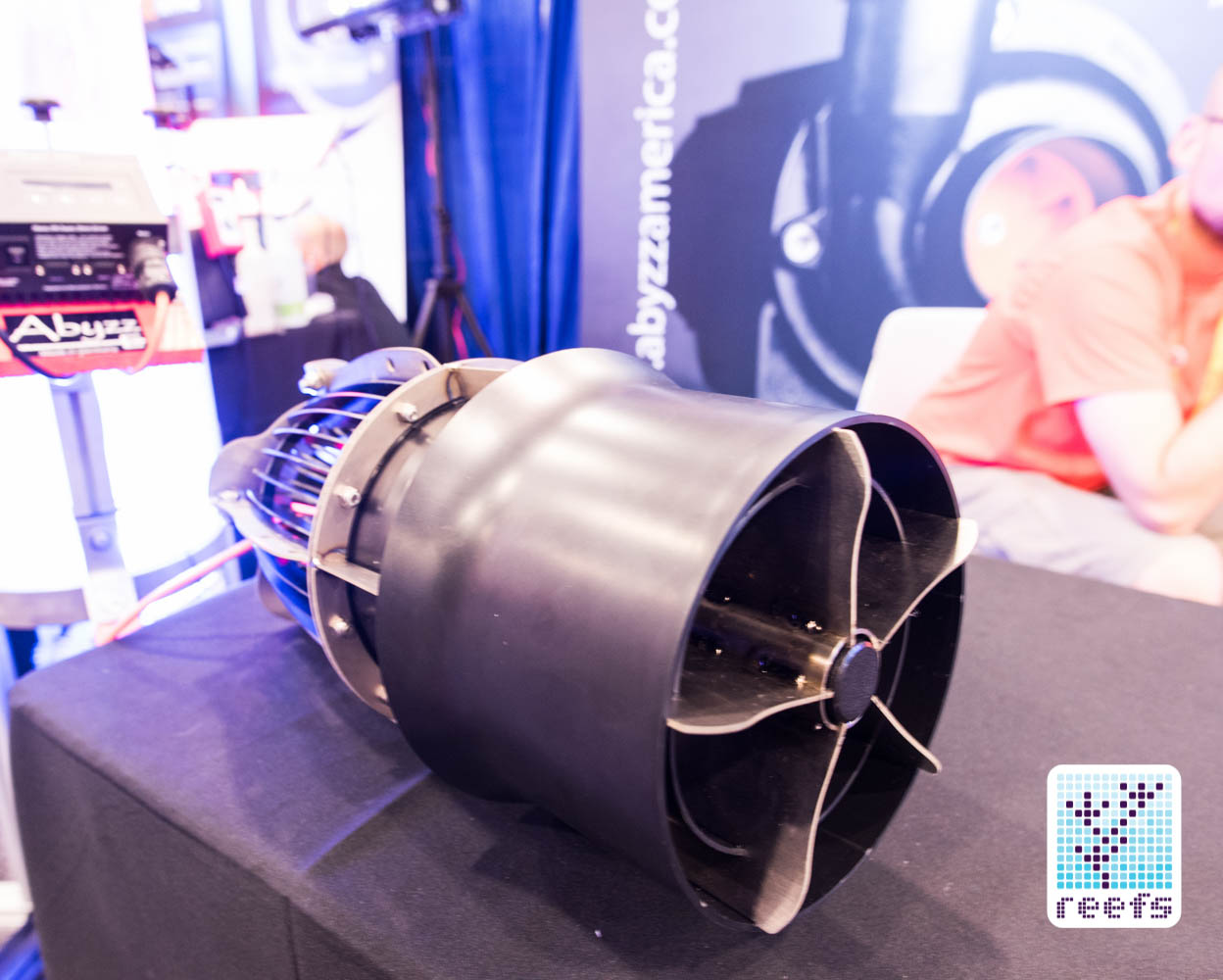 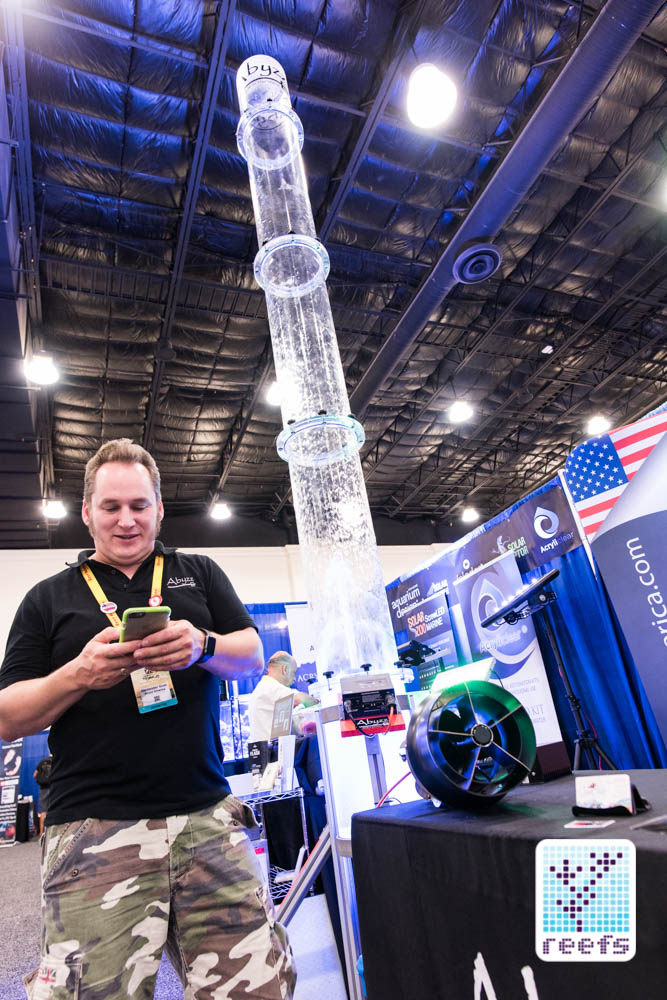 In terms of size and capabilities, Abyzz Flow Cannon is to other pumps what the jet engine of an airplane is to the piston engine of an average size lawnmower. With a maximum generated flow of over 58000 gph, a titanium body, and 400W of maximum power draw, this thing can make an actual wave you could probably surf. Despite its monstrous size and application (this is, after all, a commercial grade propeller pump), Abyzz Flow Cannon is fully controllable, with its own driver capable of slowing the impeller down to 1% flow, just like your average Chihuahua- sized wavemakers. Magnetic mount is not an option with this giant, obviously, instead, the pump sits on a titanium pole, attached to a swiveling arm made of the same material. Truly impressive powerhead for use in public aquariums and in pool-sized home aquaria. 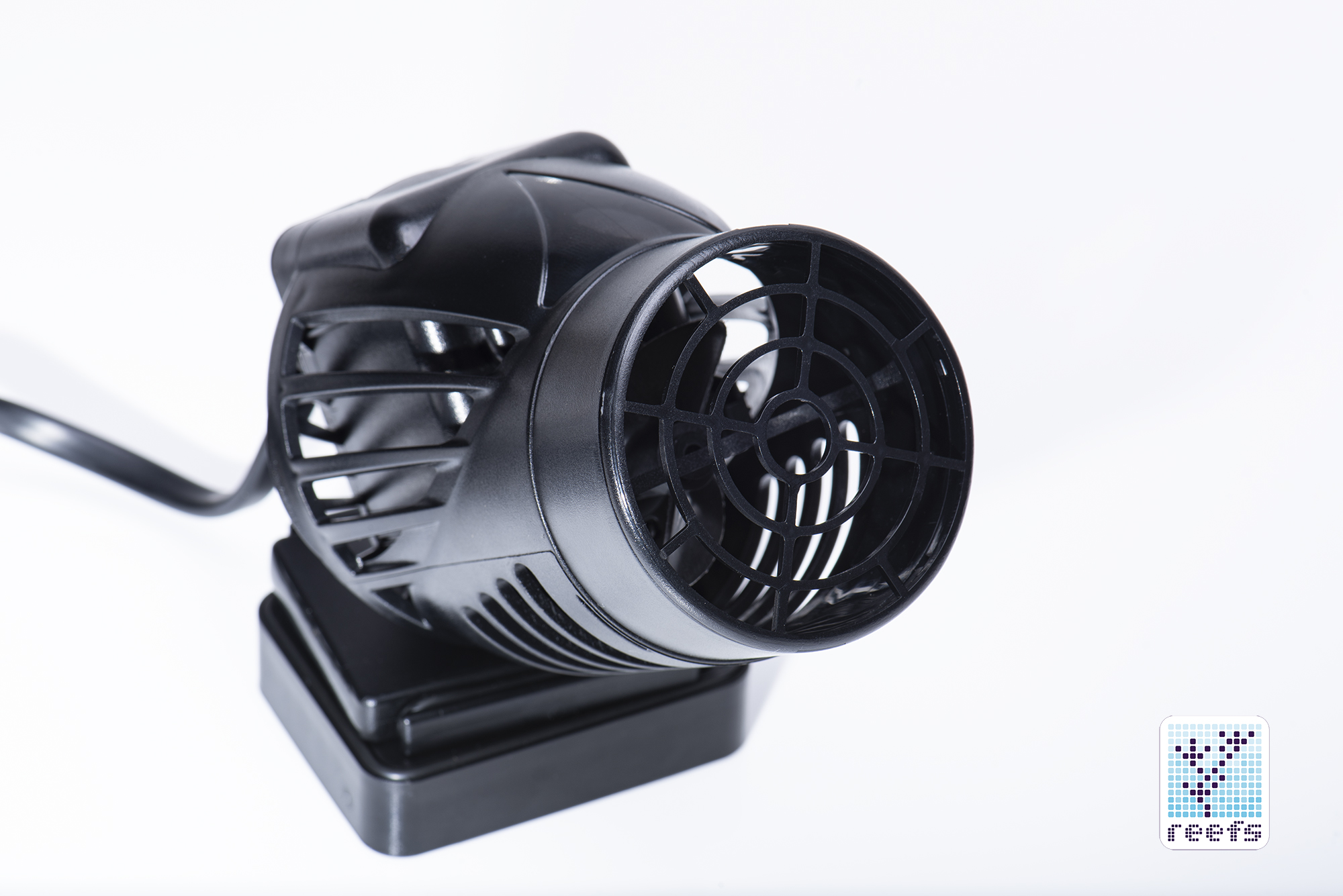 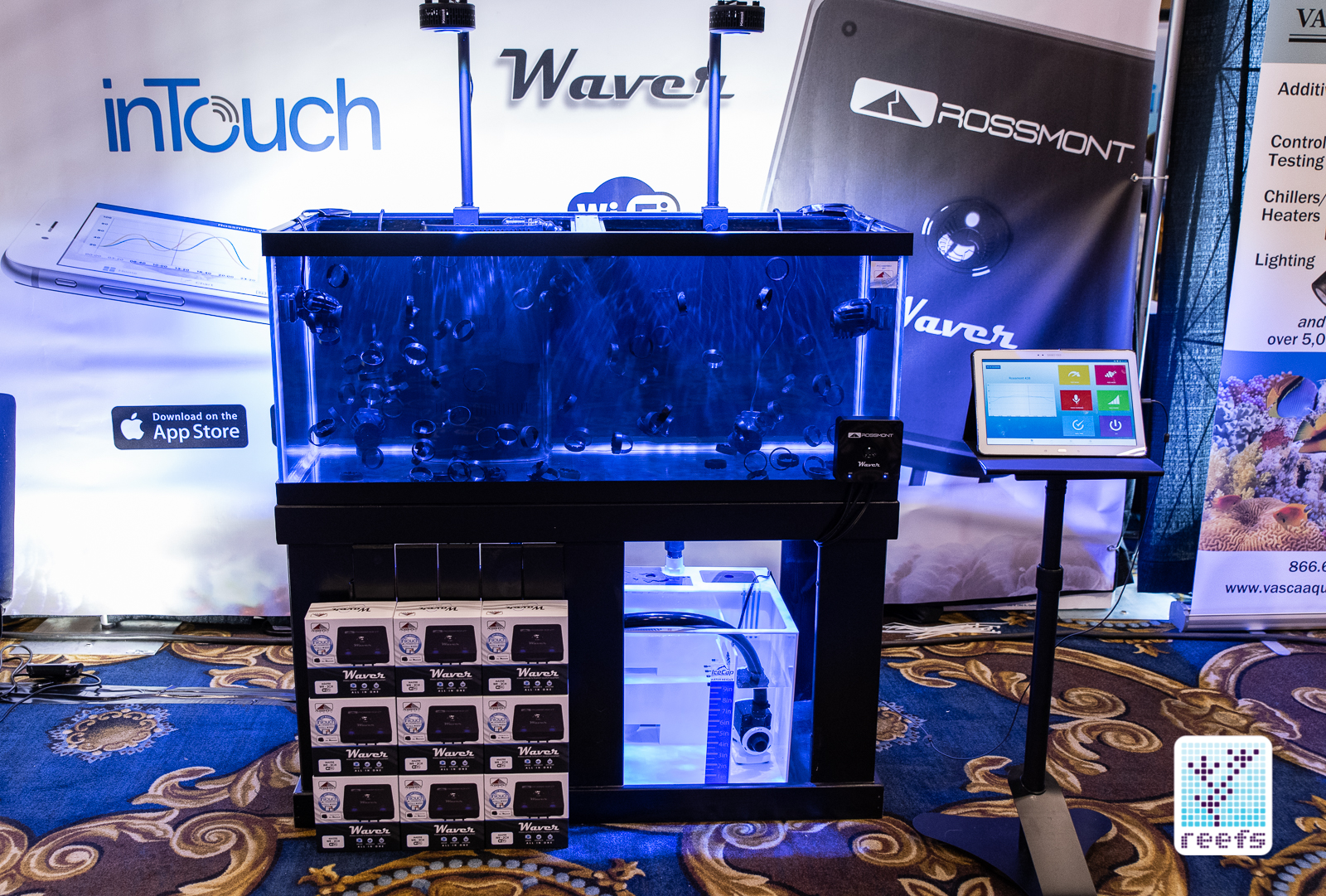 Rossmont’s line of propeller pumps look and behave just like the majority of other powerheads featured here, with one significant difference- Movers run on an alternating current (AC) yet you can control them almost to the degree of their DC powered counterparts. The advantage: AC powered pumps are much less prone to failure in general and cheaper to manufacture. Movers are very affordable for what they can provide. I have two running in my tank alongside neptune Systems WAV for over 2 years now and they are absolutely fantastic- completely silent, producing massive wide flow patterns, and extremely easy to clean and maintain. I run them on constant 30% because I don’t really care about having variable flow on the assisting back wall wavemakers. 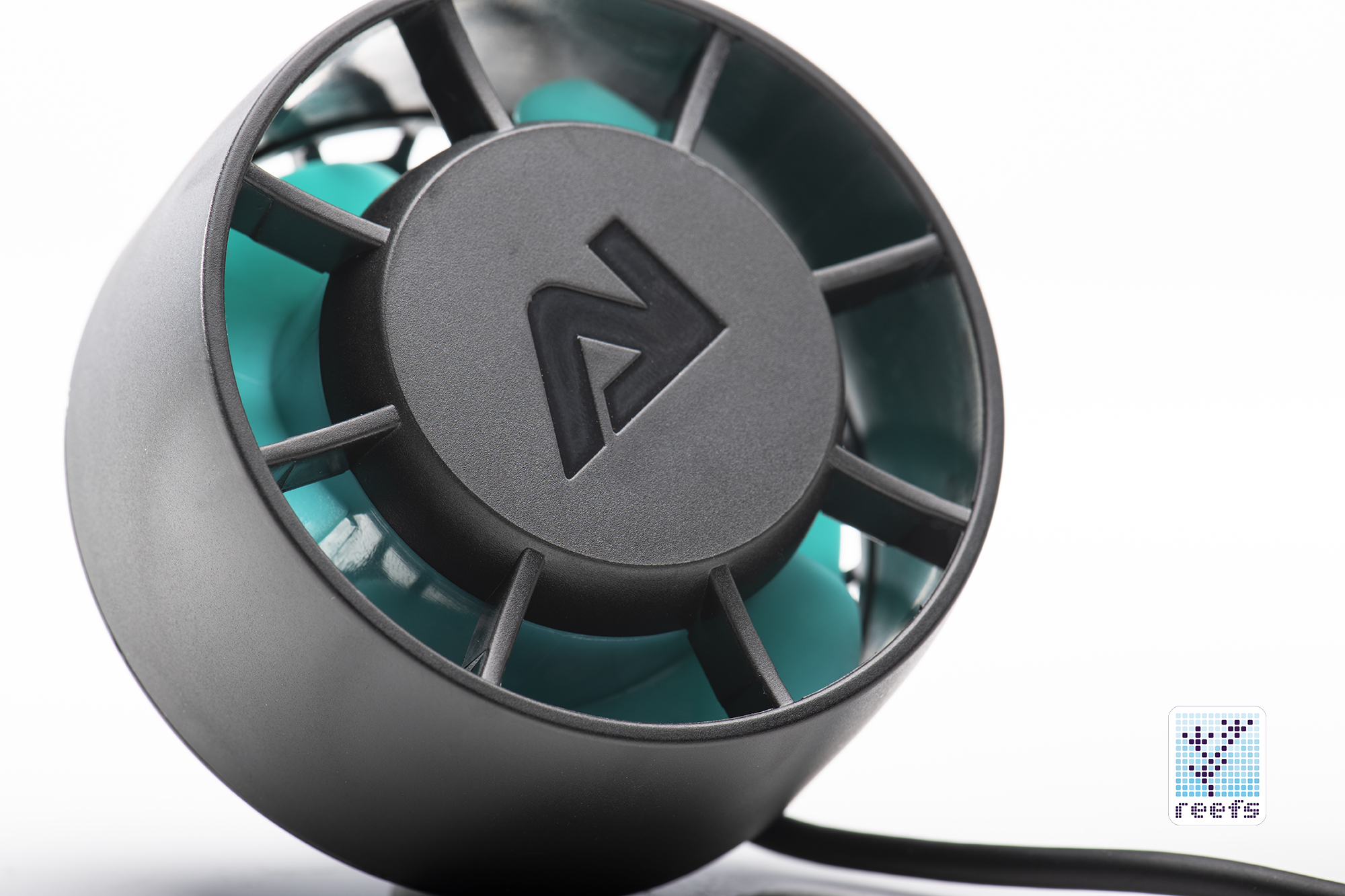 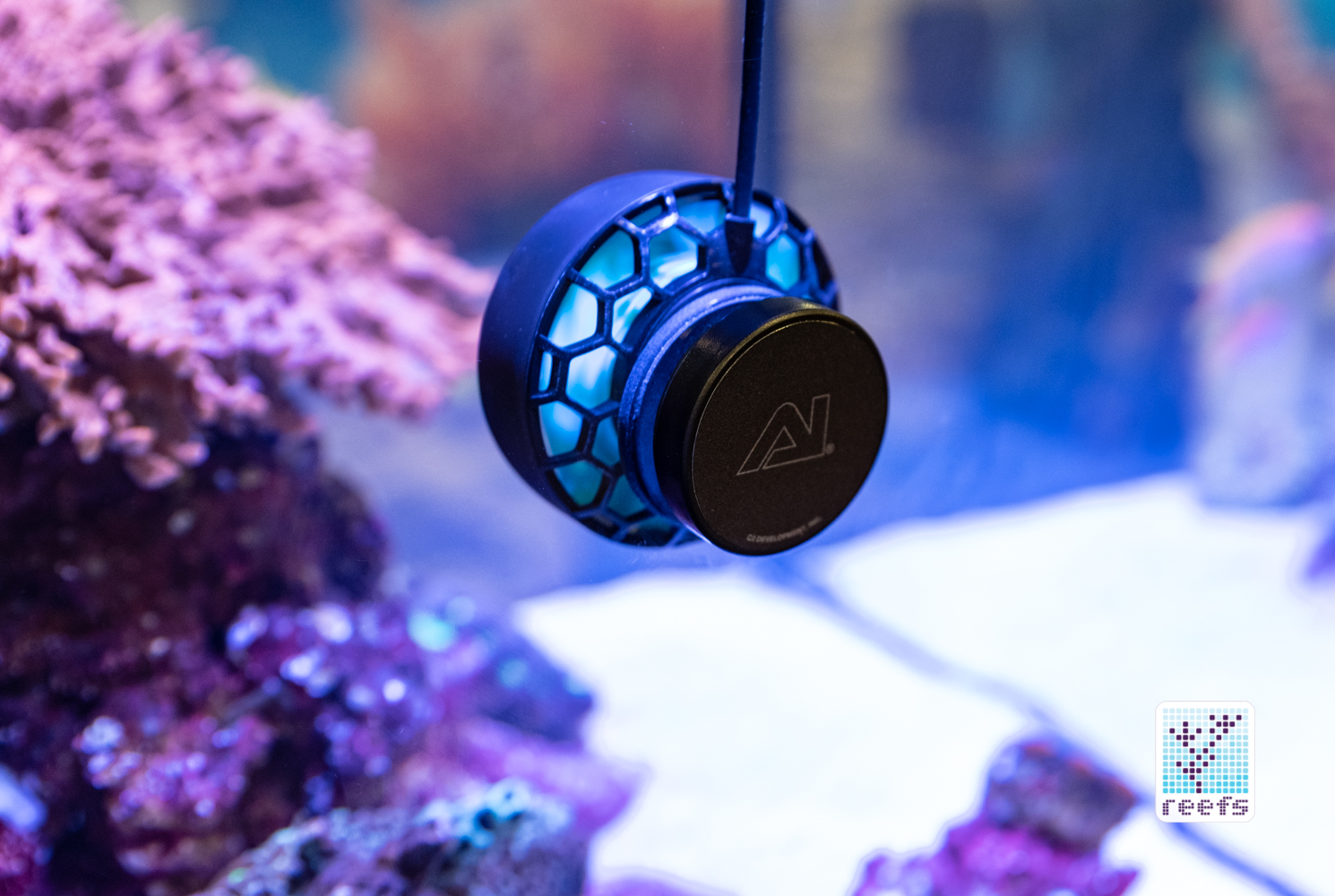 AI Nero 5 made the list despite being only a couple of months on the market because it is a very unusual pump and very likely a window into the future of wavemakers design. With its extremely compact profile and tiny Wi-Fi capable controller, Nero 5 looks like a very attractive option for small to medium sized tanks. The thing that sticks out the most about it, however, is the oversized impeller that, unlike other pumps on the market, sits over the pump’s body and impeller’s shaft, sort of like in a computer fan assembly. I just installed it in my tank for testing, so expect a future Definitive Review out of this experiment. 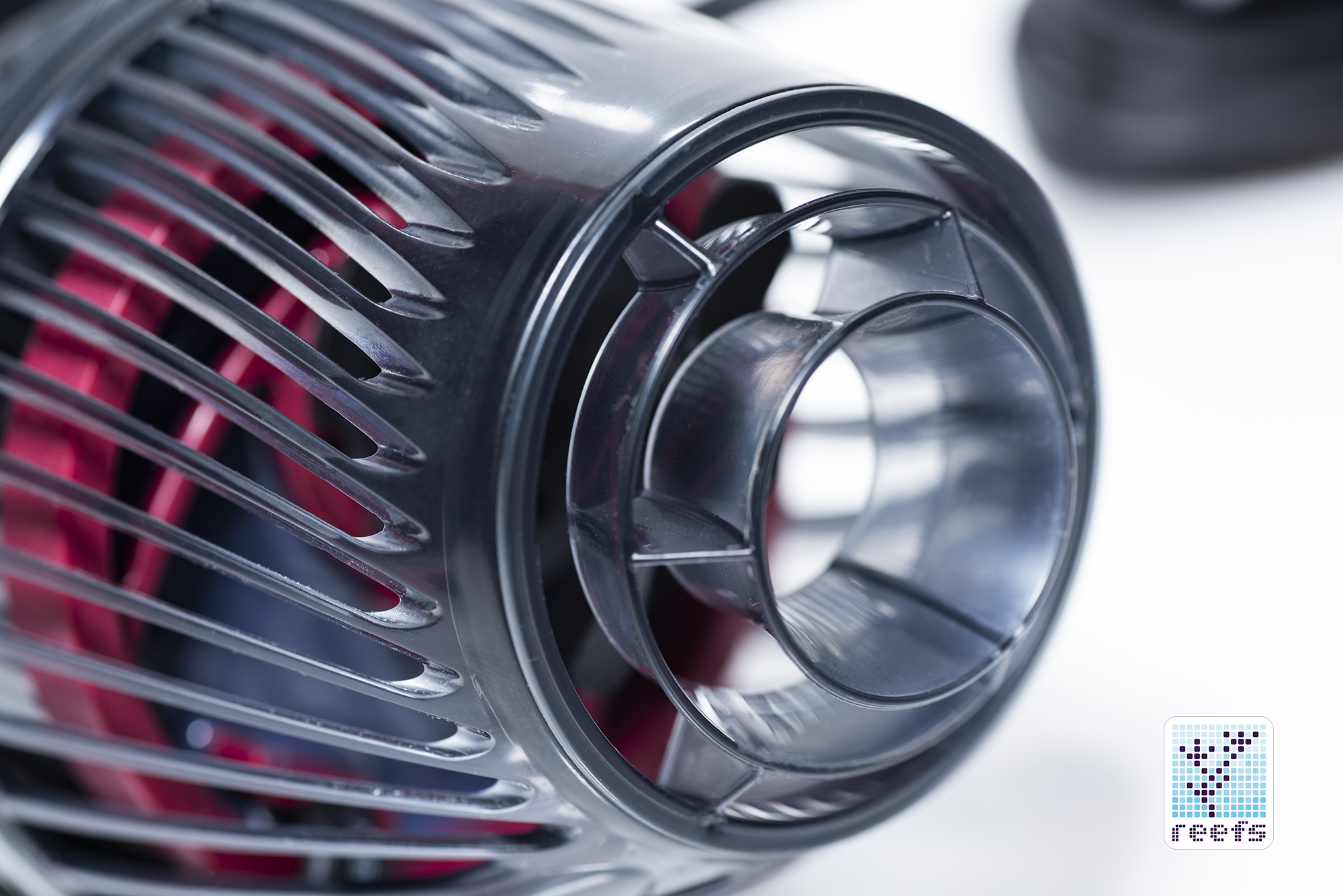 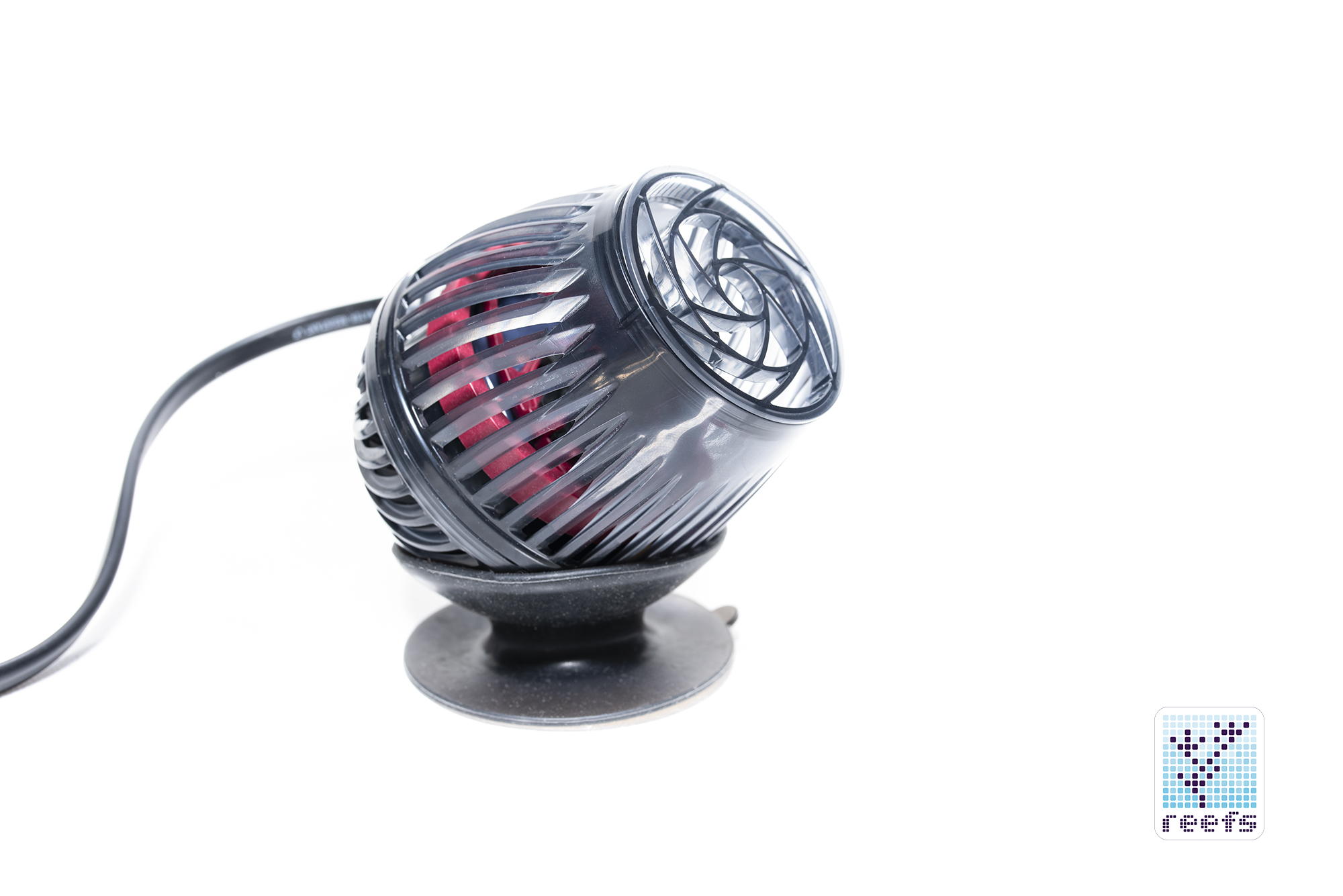 Hydor, with its massive offering of Koralia line powerheads, deserves a mention here. When Koralia first got released,  the pump wasn’t anything that we haven’t seen before, yet it gathered a massive following in the ensuing years. I think its success can be ascribed to the fact that Hydor got everything just about right and sold it with the right price tag. These pumps are simple in operation and design, but sometimes, simple is enough, especially when you are starting out and the reefing budget is shoestring thin. Koralia proves that there’s a niche in the market for everybody and for that reason, it deserves recognition. 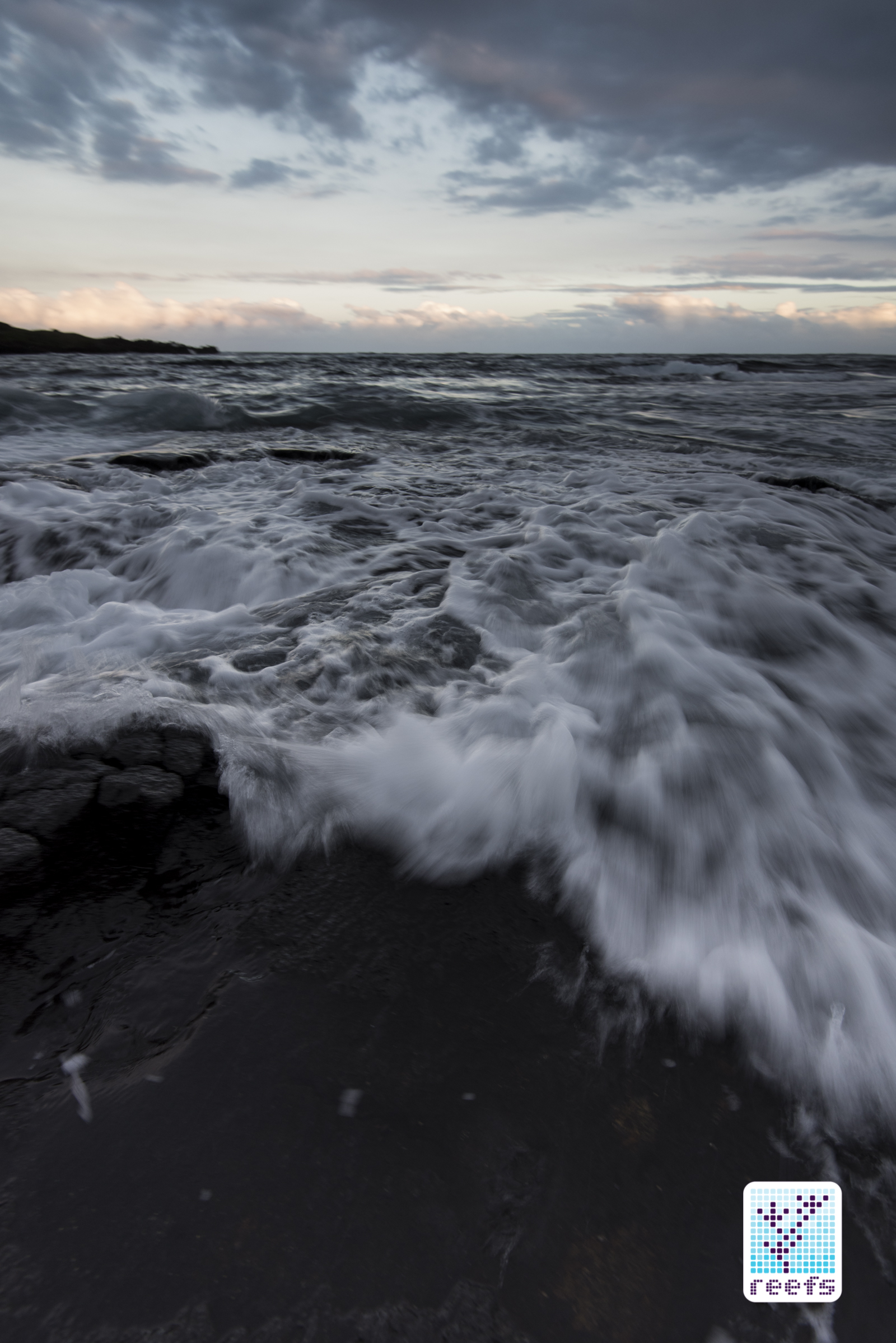 That’s the list. I hope most of you agree these powerheads are a good representation on how propeller pumps evolved throughout the years and what the future holds for this segment of the aquarium equipment we all rely on to maintain beautiful coral reefs in our homes. Stay tuned for part II of “Let’s talk pumps”, coming soon to your favorite aquarium blog 🙂 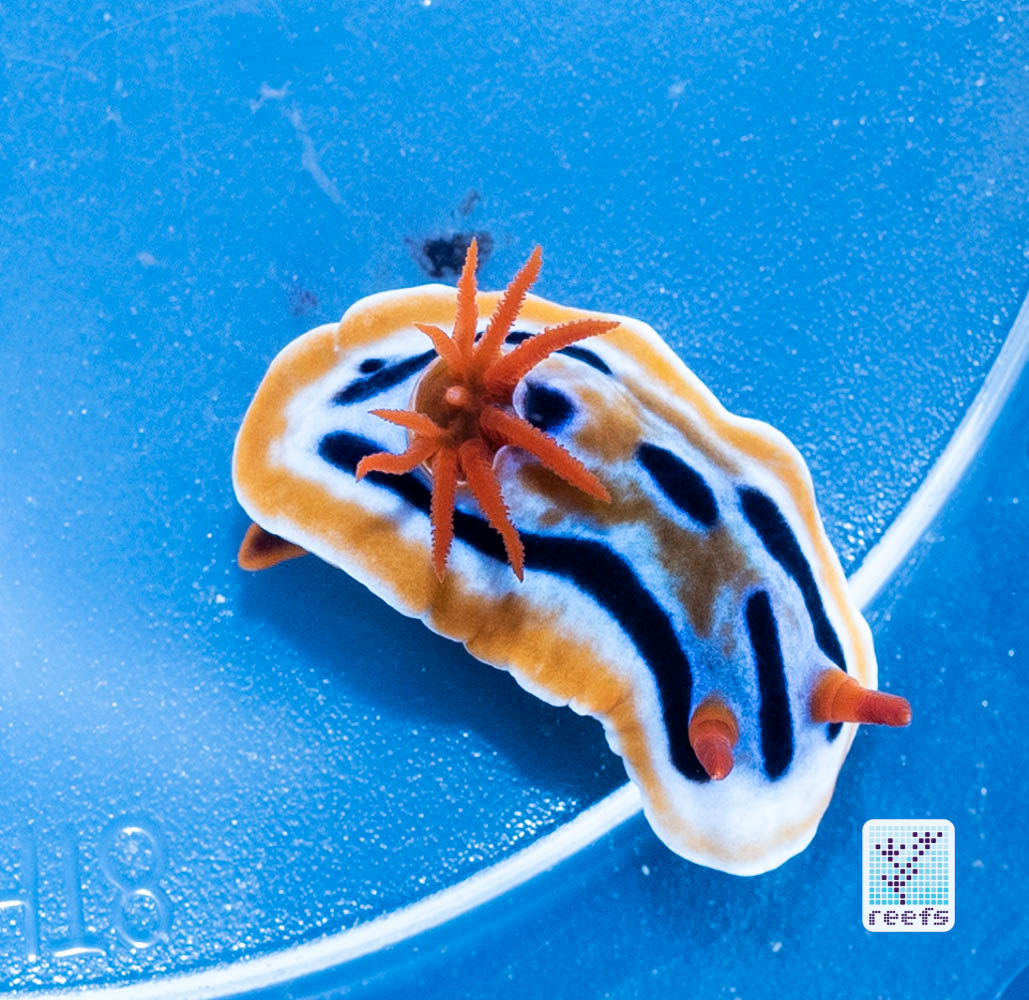 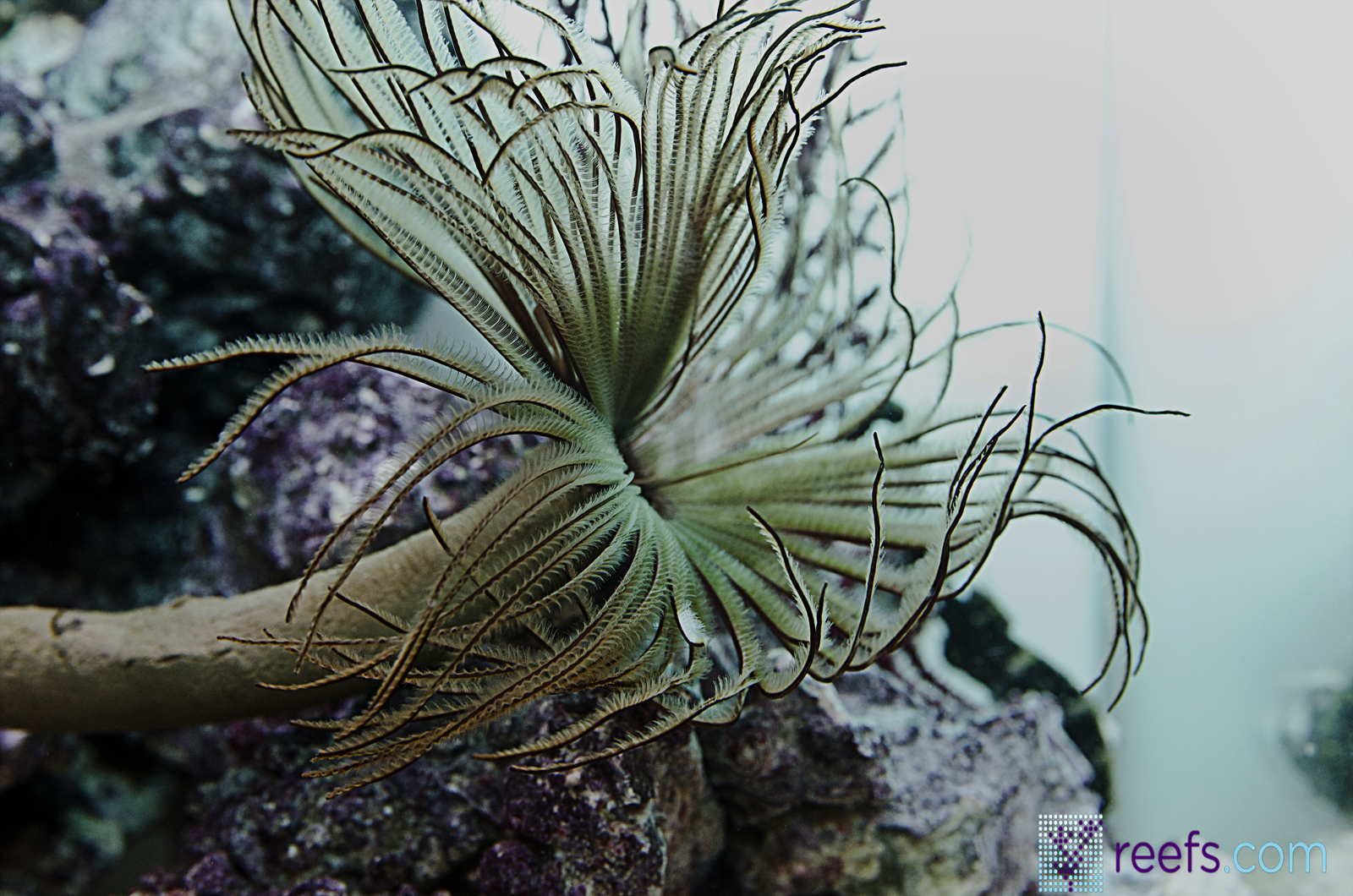