Monday Archives: Life After Death In The Deep 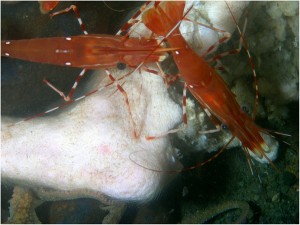 Ever wonder what would happen to your corpse if you were submerged roughly 300 feet under the sea? Yea, me neither. Keeping with my spooky theme in anticipation of Halloween, I bring to you a cadaverous investigation of carcass decomposition. While there’s a decent idea of what happens to the waterlogged bodies of deceased marine animals such as whales, dolphins and sharks, what happens to humans?

SFU Criminologists Gail Anderson and Lynn Bell chose the most genetically similar mammal available to carry out this study – the pig. Three fresh postmortem swine were lowered approximately 313 feet into the Saanish Inlet of British Columbia. Using underwater cameras, observing chemistry and weighting the pigs, the researchers were able to determine the corpses were completely stripped within two to three weeks – nearly completely bare of any incriminating evidence. Multiple species joined for dinner almost instantly when the bacon was placed – squat lobsters, shrimp, Dungeness crab and the occasional small shark. Interestingly, the Saanish Inlet is hypoxic (deficient in oxygen) and goes through periods where it’s anoxic, or completely devoid of oxygen at times. This means that only creatures adapted to the lower oxygen levels were able to dine during these periods, which essentially were just squat lobsters who’s claws couldn’t actually penetrate the pigs’ skin. The study was published in the journal PLOS One. 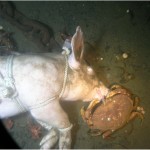 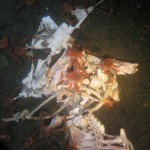 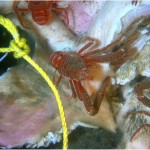