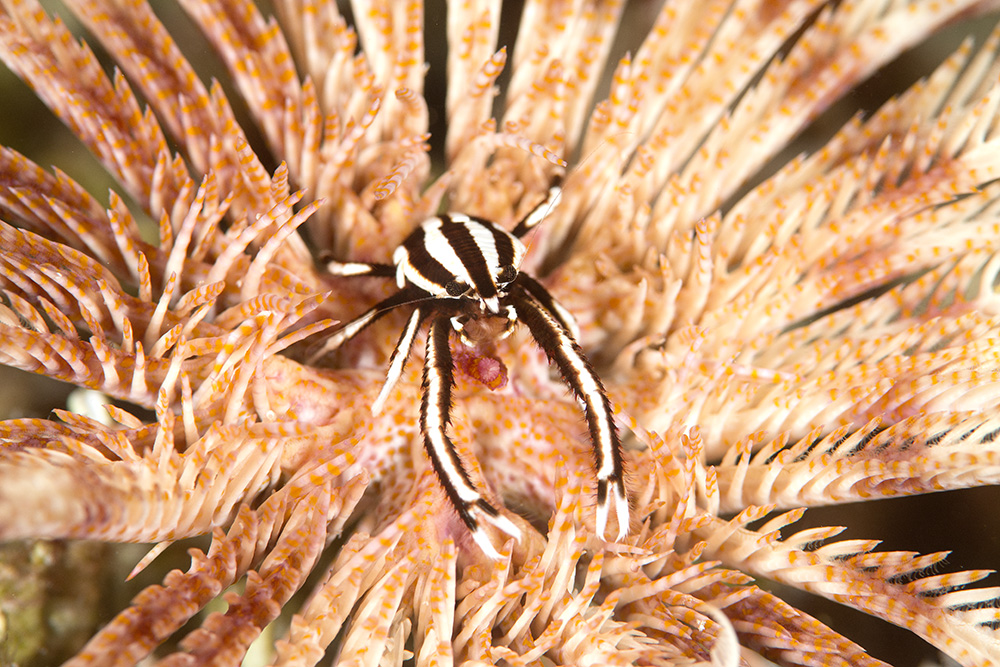 There’s a lot of talk at the moment about living in bubbles; be they on social media or in terms of social isolation and avoiding a particular pestilence that is making a nuisance of itself, to say the least.  It got me thinking about some of the creatures I’ve photographed and just how small their entire reality is.  Take the critters that live within the arms of feather stars.

Feather stars are some of the most beautiful animals in the ocean.  As echinoderms – relatives of starfish and urchins – they show radial symmetry, with many ‘arms’ arranged around a central body.  I’d say they do it with a bit  more flair than the rest of the Echinodermata.  A nighttime reef, covered in feather stars, all oriented into the current to trap passing particles of plankton, is quite a sight. 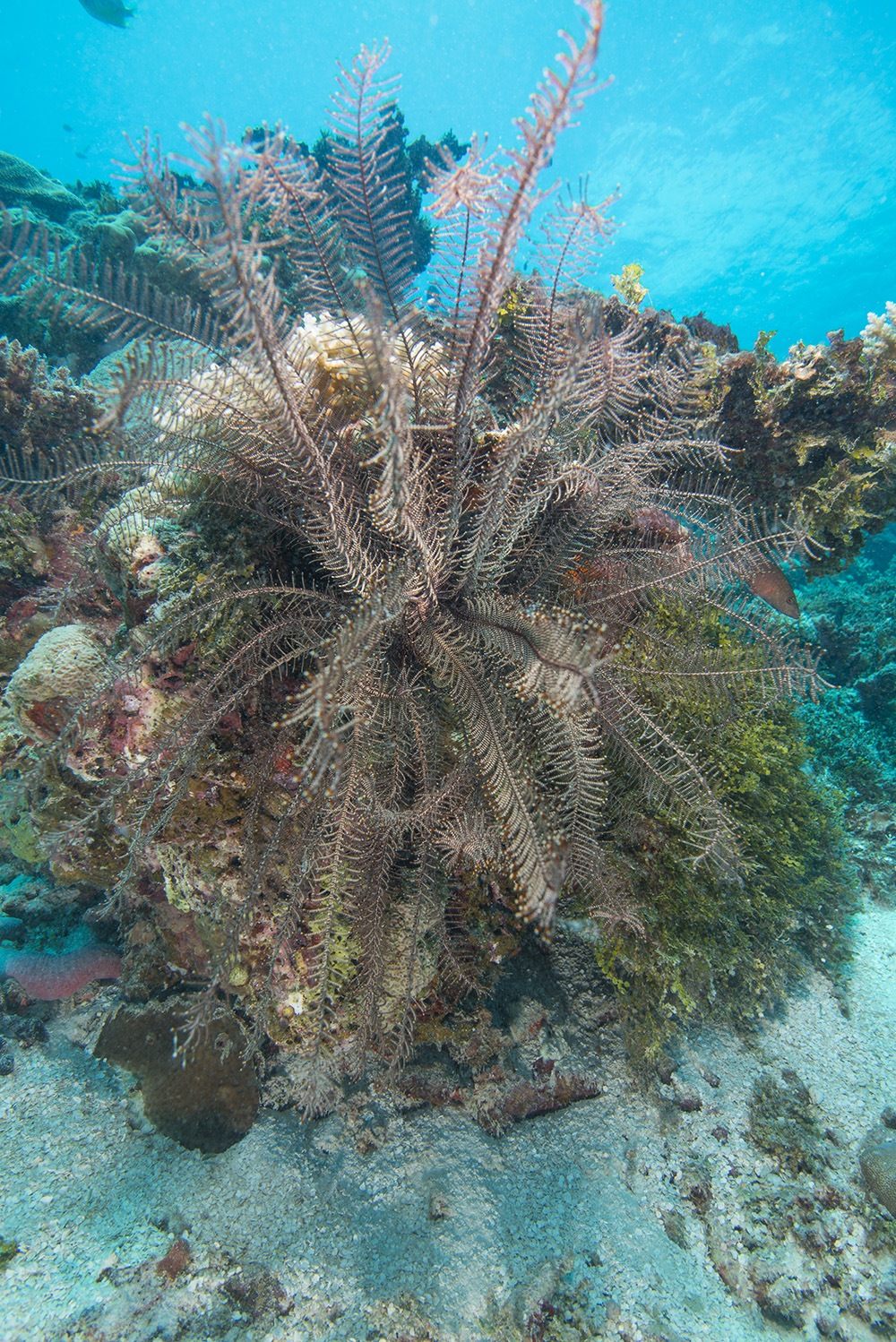 A large feather star in the Maldives, this species is active during the day.

But back to my original point.  Within the arms of feather stars, some animals may live out their entire lives, though in the case of these critters, I accept they spend some time free floating as larvae in the zooplankton, so perhaps I ought to say the bulk of their lives.

Look closely into a feather star and you might see a number of animals living and sheltering within its delicate arms.  Now this isn’t always easy as many species are active only at night and are highly motion and light sensitive, so you might never get close to them without them furling up.

With luck though, you’ll find an easily approached feather star and somewhere in its mass of fronds you’ll find a shrimp or a squat lobster, assuming you have 20/20 vision; these guys are masters of disguise.  Photographing them adds an extra level of complexity.  You have to find the animal, focus, shoot, get your exposures and lighting correct, and concentrate on your buoyancy so as not to damage the animal or the reef around it. 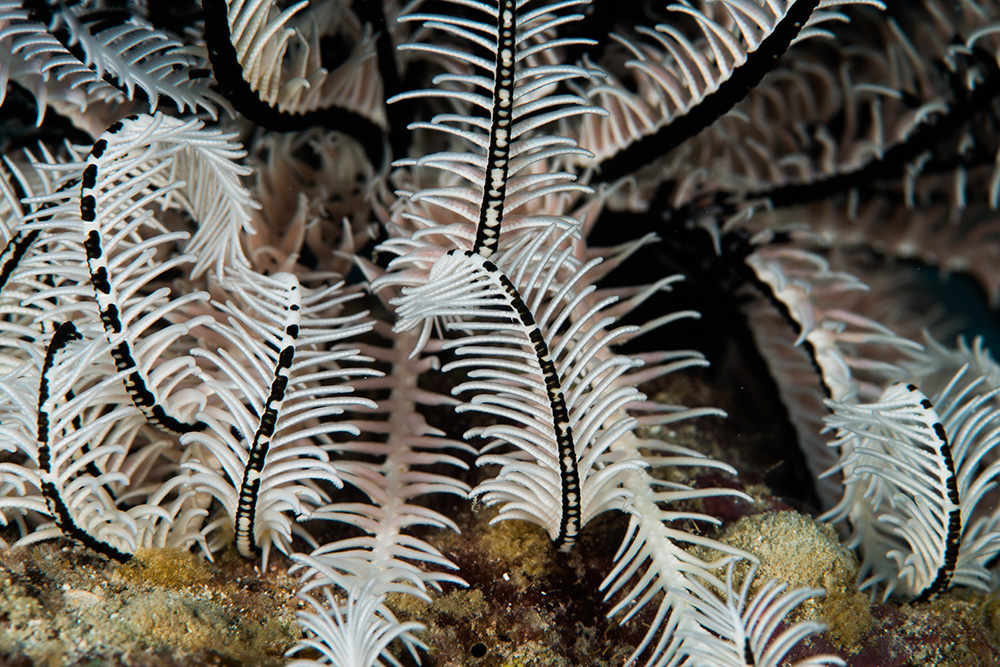 There could be an interesting invert somewhere in here. Good luck finding it.

In the image below, you can see just how well-camouflaged some animals are.  I’m not going to embarrass myself by trying to ID this shrimp; I’ll likely get it wrong. You can see how the feather star has furled up a little and the shrimp is on the outside.  I can tell you it took a lot of time to find such a well-camouflaged animal. 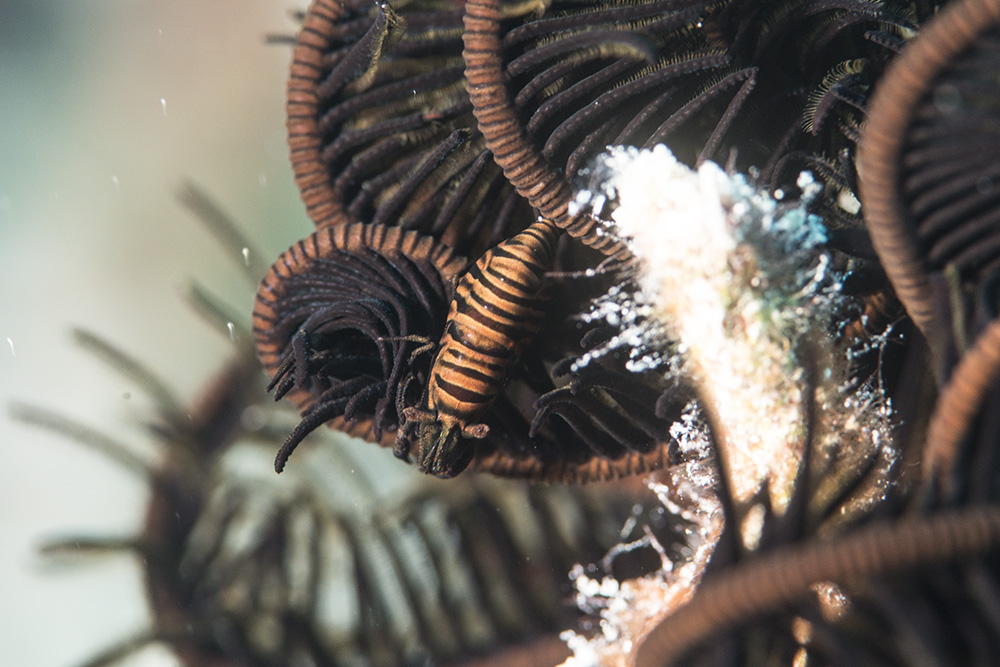 Every so often though, the universe offers up a real gift of a shot. 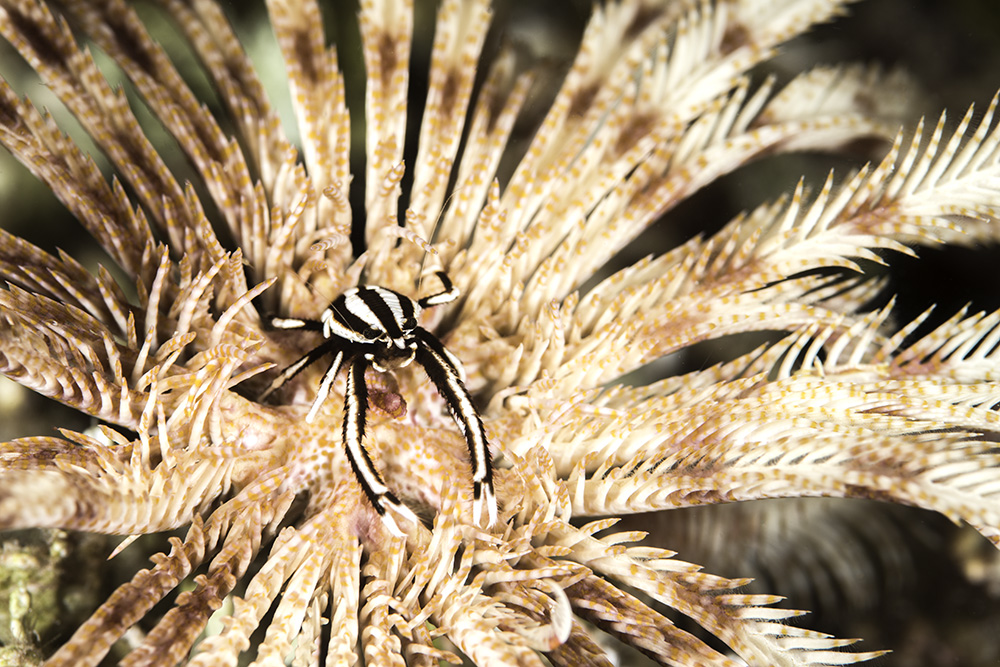 This feather star sat atop the reef, arms open, entirely relaxed, and within it sat this gem of an animal.  What I assume is Allogalathea elegans.  I couldn’t believe my luck!

What must it be like to have your entire world defined by and comprised of a feather star?  Whilst these animals can live without hosts, the protection they gain from and the boost in feeding success they get from being in a  feathers stars’ arms must lengthen their lifespan significantly.