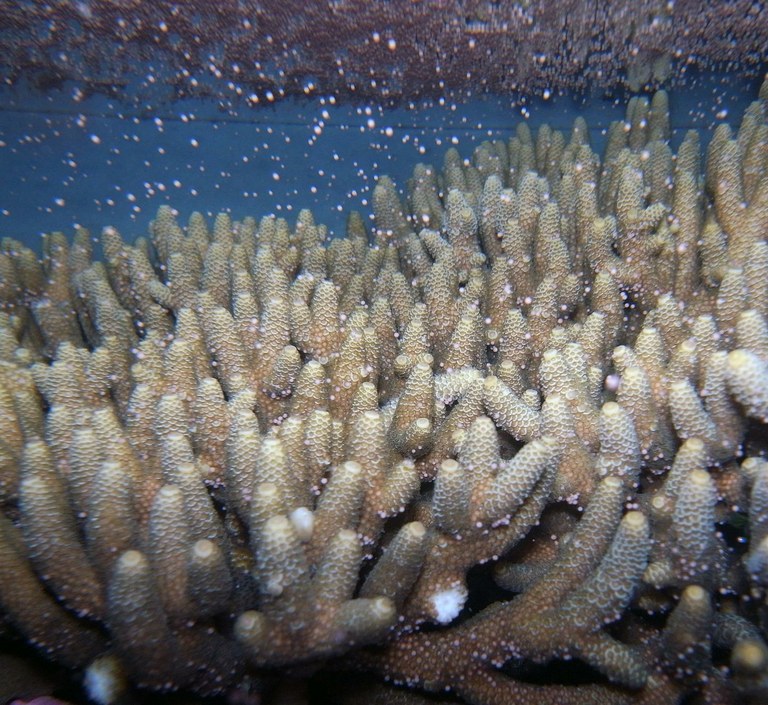 A millepora colony is releasing gametes during a mass spawning event in 2011 at Heron Island GBR Australia. Photo by Dr. Oren Levy

Israeli and Australian scientists have found that coral exposed to artificial light cannot detect moonlight and therefore fail to spawn. Their findings are published in the journal eLife.

An association between light pollution and the health of coral reefs has been suspected since the 2007 discovery that moonlight triggers the mass release of eggs and sperm. The current study led by Bar-Ilan University, in collaboration with the University of Queensland, is the first to confirm the effect with field trials during a spawning event.

The researchers are also the first to show all the genes that are switched on and off during mass spawning. The snapshot provides new insights into the way external cues and corals’ internal circadian clock interact to prepare for reproduction and to synchronise the eventual release of spawn.

“Sexual reproduction is one of the most important processes for the persistence of coral reefs,” says lead researcher Oren Levy from Bar-Ilan University.

Coral only reproduce once a year and, as well as being regulated by moonlight, they carefully monitor their environment – including the sea state, salinity, food availability and the colour of twilight – to increase their chances of success. With no eyes or other visual structures, corals rely on photosensitive molecules such as cryptochromes or opsins that help them to synchronise with the power of the light.

“If the process is disrupted, we assume reefs might work round it for a few years using the mechanisms they have to cope with a variable world, but we just don’t know what the impact could be on their long-term health,” says first author Paulina Kaniewska from the University of Queensland.

The research was carried out on the Great Barrier Reef, a World Heritage Area where there is very little light pollution. On the other side of the world, the waters of the Gulf of Aqaba on the northern tip of the Red Sea are also protected and even scientific dives are not permitted. But these same stretches are subject to light pollution from both the Israeli and Jordanian coastlines.

Levy suggests protecting the less industrialised parts of the Gulf, away from the city of Eilat and the majority of hotels, in a coral reef reserve. A marine research station is already located here, where Levy often carries out experiments.

“Protecting the reef in a reserve could help maintain it for the marine life it supports and for sustaining the interest and income from generations of tourists to come.”

Coral is formed by thousands of genetically identical polyps that live together as a colony. The researchers collected 20 colonies of the stony coral Acropora millepora eight days before they were due to spawn on the Heron Island reef flat in the southern Great Barrier Reef. Four were left in the field and the remaining 16 were transferred to large outdoor aquaria flushed with seawater and exposed to sunlight and moonlight.

The colonies exposed to normal conditions spawned at around the same time as those on the reef. However, there was no sign of spawning behaviour in either the corals exposed to artificial light or those left in the dark. The activity of genes was shown to be disrupted and these colonies did not release sperm or eggs.

The results also suggest that the effects of light pollution can occur much more rapidly than previously thought. It was thought that corals take months to become tuned to the moonlight rhythms that guide reproduction. However, the current study suggests that disruption can occur within seven days of coral being exposed to changes in nocturnal light.

The paper ‘Signaling cascades and the importance of moonlight in coral broadcast mass spawning’ can be freely accessed online at http://dx.doi.org/10.7554/eLife.09991. Contents, including text, figures, and data, are free to re¬use under a CC BY 4.0 license.