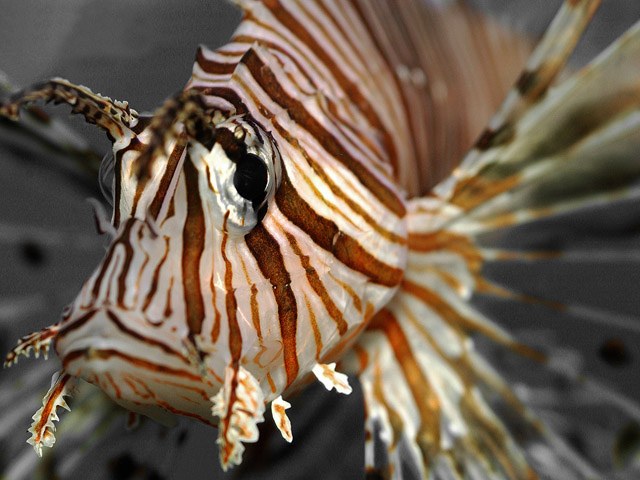 Caribbean fish can not recognize the stripped camouflage of invasive Indo-Pacific lionfish.


‘Ghost’ fish taking over the Caribbean

A spiny, toxic and beautiful member of the world’s coral reef communities, the Red Lionfish is invisible to the small fish it likes to eat.

A new study by James Cook University scientists Oona Lönnstedt and Professor Mark McCormick suggests this is one reason for the lionfishes’ incredible success in the Caribbean, where it is eating its way through the reef ecosystem.

“Lionfish are native to the Pacific, but have been taking over the Caribbean Basin ever since they were accidentally introduced almost 30 years ago,” Professor McCormick said.

“Their extreme success as an invasive predator has long been a mystery to ecologists worldwide.”

The new research, published in the latest issue of PLoS ONE suggests that the solution in part lies in the power of camouflage, as these voracious carnivores are virtually undetectable by small prey fish.

Red lionfish (Pterois volitans) are a rare and beautiful sighting for divers in their native waters around the Great Barrier Reef, but in the reefs around the Florida coast and Caribbean they are viewed as a huge nuisance.

“For over a decade, scientists have tried their best to understand how these gorgeous but deadly predators can wreak such havoc on their invaded ecosystem,” Professor McCormick said.

“Almost all of the work to date has focussed on the consequences of the interaction between these predators and their prey in areas where lionfish are invasive species.”

Now, as a world first, graduate student Ms Lönnstedt and Professor McCormick have found that lionfish are undetectable by prey, acting as ghosts able to feed on anything and everything without being discovered until it’s too late.

“We tested the response of small prey fish to three different predators, one of them the lionfish,” Ms Lönnstedt said.

“Surprisingly, the common prey fish were unable to learn that the lionfish represented a threat, which was very different to their response to two other fish predators.

“Lionfish were able to sneak up on their prey and capture every single one, while the other predators had much lower feeding success.”

This ability to bypass a very well-studied learning mechanism commonly used by prey to learn new risks is a world first, and has in part lead to the astounding success of lionfish in the Caribbean.

With release from any natural enemies in their new system and no problem catching food, the lionfish are practically unstoppable.

The paper ‘Ultimate Predators: lionfish have evolved to circumvent prey risk assessment abilities’ is published in the latest issue of PLOS ONE.