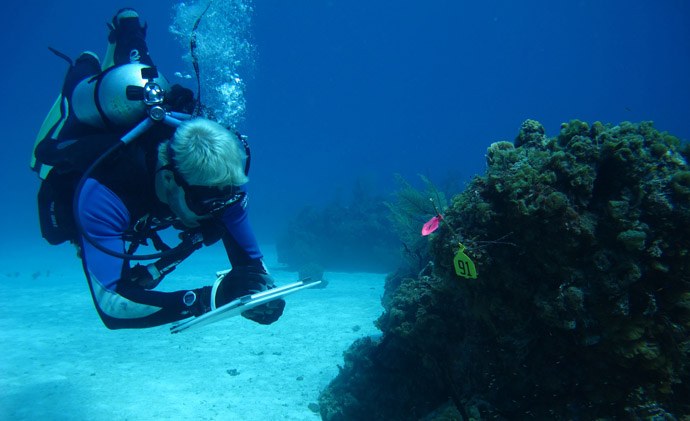 OSU researcher in the field

New research on the predatory nature of red lionfish, the invasive Pacific Ocean species that is decimating native fish populations in parts of the Caribbean Sea and Atlantic Ocean, seems to indicate that lionfish are not just a predator, but more like the “terminator” of movie fame.

The finding of behavior that was called “alarming” was presented today by Kurt Ingeman, a researcher from Oregon State University, at the annual meeting of the Ecological Society of America.

Most native predatory fish are attracted to prey when their numbers are high, when successful attacks are easy and when a minimum of energy is needed to catch and eat other fish, according to previous research done by Michael Webster, a fish ecologist who received his doctorate from OSU. As the population of prey diminishes, the native predators often move on to other areas where, literally, the fishing is better.

The new research concludes that lionfish, by comparison, appear to stay in one area even as the numbers of prey diminish, and in some cases can eat the population to local extinction. They have unique characteristics that make this possible, and like the terminator, they simply will not stop until the last of their prey is dead.

“Lionfish seem to be the ultimate invader,” said Ingeman, a doctoral candidate in the Department of Integrative Biology within the OSU College of Science. “Almost every new thing we learn about them is some characteristic that makes them a more formidable predator. And it’s now clear they will hunt successfully even when only a few fish are present. This behavior is unusual and alarming.”

This research was conducted on replicated natural reefs in the Bahamas, measuring prey mortality of the fairy basslet – a popular aquarium fish and a common prey of lionfish.

Predation rates were compared between reefs with the invasive lionfish and reefs with native predators alone, and across a range of population levels of the fairy basslet. Ingeman found that when prey fish were present at a low population density, the rate of mortality with lionfish present was four times higher than that caused by native predators alone, such as medium-sized groupers or trumpet fish.

The findings are of some importance, researchers said, because fairy basslet live in small local populations, which are most vulnerable to local extinction. It also shows that the mechanisms that ordinarily regulate population size can be altered.

“Reef fish usually hide in rocks and crevices for protection, and with high populations, there is a scramble for shelter,” Ingeman said. “Native predators take advantage of this situation by mostly eating when and where prey are abundant. As prey population levels decline, it takes a lot more energy to catch fish, so the predators often move on to other areas.”

Because of this process that scientists call “density-dependent” predation, populations of native prey fish tend to shrink when they get too large, grow when they get too small, and are rarely ever wiped out completely.

Lionfish, however, have such advantages as an invasive species that they apparently feel no need to move on for better or easier hunting. They may not be recognized as a predator by other fish, leading to high mortality even when shelter is abundant. Lionfish are also very efficient hunters, are well-defended themselves by poisonous spines, and can thrive at deep levels in the ocean. They tolerate a wide range of habitats and water conditions, reproduce rapidly most of the year, eat many different species of native fish and may overeat rare species.

Still unclear, Ingeman said, is whether evolutionary pressures may allow native fish in the Atlantic Ocean to adapt new behaviors that provide better defense against lionfish.

“There’s a strong pressure here for natural selection to come into play eventually,” Ingeman said. “We know that fish can learn and change their behavior, sometimes over just a few generations. But we don’t have any studies yet to demonstrate this is taking place with native fish populations in the Atlantic.”

The lionfish invasion in the Atlantic Ocean is believed to have begun in the 1980s and now covers an area larger than the entirety of the United States. Ingeman’s adviser, Mark Hixon, and fellow graduate students have shown that lionfish can wipe out more than 90 percent of the native fish in some hard-hit areas.

The research was supported by the National Science Foundation and the Cape Eleuthera Institute of the Bahamas.