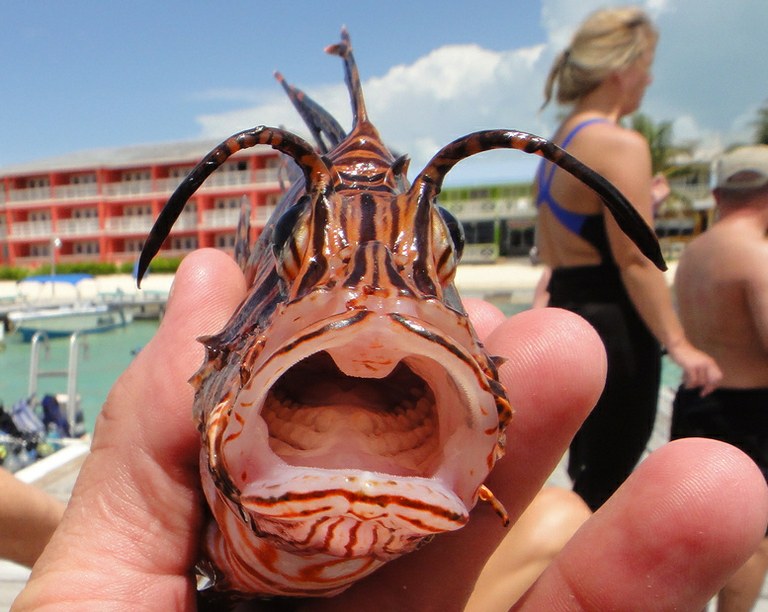 
Ciguatoxins are a class of chemicals that can be found in certain fish that cause ciguatera in people that eat them.

The toxin is produced by a dinoflagellate called Gambierdiscus toxicus and is typically found in the skin, head, eggs, and internal organs of large fish like groupers, wrasses, triggerfish, and unfortunately lionfish. Symptoms begin in a matter of hours after someone eats an infected fish: “vomiting, diarrhea, numbness of extremities, mouth and lips, reversal of hot and cold sensation, muscle and joint aches.”

Unfortunately there is no antidote for ciguatoxin and symptoms can last for days, weeks, or even months in extreme cases. Unlike some toxins, ciguatoxin is not broken down by heat so cooking will not inactivate it. It is also not routinely tested for in fish, so a lot of times it is misdiagnosed as food poisoning.

This is very bad news for us as we were planning on promoting lionfish as an edible, commercially viable fish which we hoped would help in reducing its numbers along the reefs. However, before we started telling the community that the fish is edible we wanted to be absolutely sure that there were no health care threats associated with eating the fish. With our partners in the USVI and in the French Islands we tested several samples of lionfish meat and have found that unfortunately an uncomfortably high percentage showed the presence of ciguatoxin in the meat. Therefore we do not recommend that Lionfish be eaten.” says Nature Foundation Manager Tadzio Bervoets.

It’s still very important to aggressively hunt this invasive species. However eating them may be out of the question.