Lipogramma idabel, A Surprising New Basslet From The Caribbean 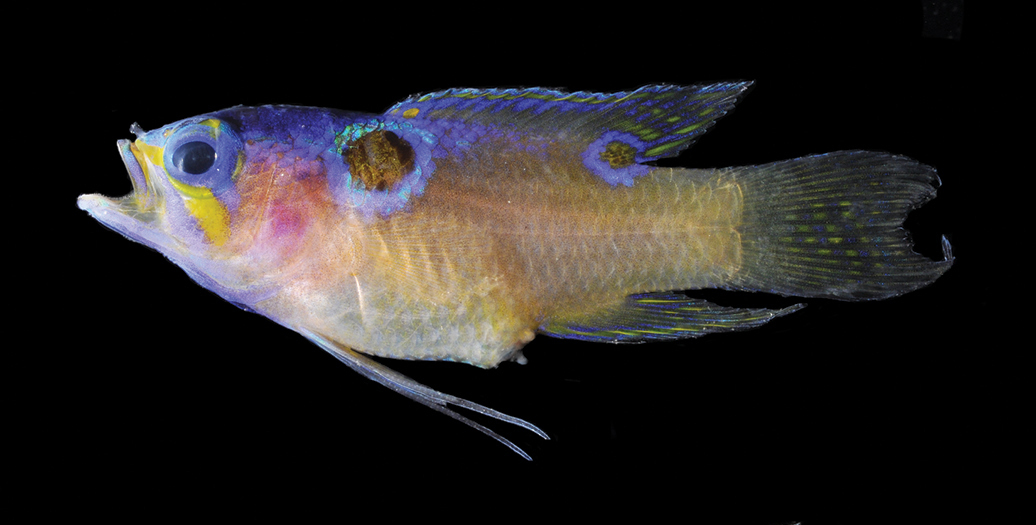 The little Lipogramma basslets are proving to be one of the most diverse and fascinating groups of reef fishes in the Caribbean. The dozen or so species in this genus (two of which were just described back in January) present an array of eye-catching color, correlating with a complex evolutionary history driven by geographically and ecologically induced patterns of speciation. In any given region, you’re likely to find a handful of species, each doing its own thing in a separate part of the reef.

At the popular dive spot of Roatan, off the coast of Honduras, you’ll find the shallowest member—the Bicolor Basslet (L. klayi), specimens of which occasionally enter the aquarium trade—along steep dropoffs at depths of 65-120 meters. Venture deeper, below 200 meters, and you’ll encounter the Banded Basslet (L. evides) cavorting among the cobbles of the deeper slopes, along with the Yellow Basslet (L. flavescens), which favors more open, sandy terrain. This ecological partitioning is an important factor in the diversification of this genus, and we’re about to see this phenomenon crop up again with a newly described species form these deep reefs.

In addition to the shallow and rariphotic taxa just discussed, Roatan offers us the Hourglass Basslet (L. levinsoni) at intermediate depths of roughly 110-150 meters, where it can be found “hovering around and above limestone rubble and small cobble habitats on gradual slopes”. But when we move over to “larger rocks, caves, and outcroppings on steeper slopes and vertical walls”, we meet with the stunning Blue-backed Basslet (Lipogramma idabel), described in the latest edition of the journal ZooKeys.

As seen in the video, this species was collected with the help of a bit of fish tranquilizer and the slurpgun of the Idabel research submersible, for which this species is named. The dramatic coloration is hard to appreciate in the faded type specimens, but, seen in situ, this fish dazzles with its blue and yellow palette. The prominent ocellus below the dorsal fin is equally diagnostic within this genus, with certain other species tending to have a vertical bar in that location.

When we look at the genetics of this beast, we find its apparent sister species in the Royal Basslet (L. regia). The two share some similarities in their patterning, especially when it comes to the yellow markings of the face, though they are otherwise very distinct. Interestingly, L. regia is quite different in its ecology and biogeography, occurring in shallow depths (<100 meters) and being found further north, in the Bahamas, around Puerto Rico, Bonaire, and apparently near to where the Deepwater Horizon infamously spilled oil into the Gulf of Mexico, just off the tip of Louisiana.

If these two are truly sister taxa, it’s not hard to imagine the forces which might have caused their speciation, as Roatan is effectively cut off from these other parts of the Caribbean during periods of low sea level. This has resulted in a fairly unique marine fauna, full of endemic snails and gobies and, perhaps, this new basslet as well. The authors state that in their 150 or so submersible dives, they have yet to encounter Lipogramma idabel anywhere outside of these deep Roatan reefs.