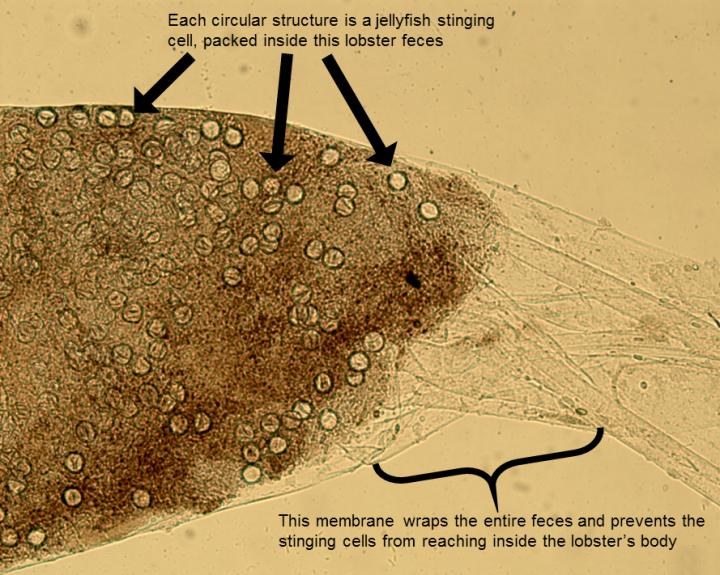 Empty circles are the nematocysts, or stinging cells, of jellyfish that have been packed together and wrapped tightly into packages of feces in the beginning of the lobster’s digestive tract. The membrane, which can be seen extending off to the right side of the image, is a mechanical adaptation to prevent lobsters from being killed by their venomous food.

From the Hiroshima University:

Lobsters eat jellyfish without harm from the venomous stingers due to a series of physical adaptations. Researchers from Hiroshima University examined lobster feces to discover that lobsters surround their servings of jellyfish in protective membranes that prevent the stingers from injecting their venom. The results are vial for aquaculture efforts to sustainably farm lobsters for diners around the world.

Lobsters grow for years before becoming a red-shelled main meal. In their early life stages, the larvae of slipper and spiny lobsters are nearly transparent and about the size of an adult’s thumb nail. Lobster larvae ride around the ocean on the bodies of jellyfish while eating them alive, including the venomous portions of the tentacles.

Kaori Wakabayashi, Ph.D., is the leader of a research group at Hiroshima University and has studied lobster development with the goal of creating a food for farmed lobsters. Lobsters are not farmed on the scale of shrimp (prawns), crab, or fish because their development and nutritional needs remain poorly understood.

“Farmed marine species are often fed sardines, which has contributed to a dramatic decrease in global sardine populations. In the future, artificial food will empower farmers to provide their lobsters with convenient, sustainable, and safe nutrition regardless of weather, locality, or the availability of other marine resources. Knowing what the lobsters ate also ensures greater food safety for people,” said Wakabayashi.

Lobsters’ intestines are lined with the same hard plates of chitin that cover the outside of their solid bodies. These plates probably defend the lobsters from jellyfish stings both on the surface and inside of their bodies. However, the intestinal armor does not cover the middle third of the length of the lobsters’ intestines, leaving their midgut exposed to the stingers.

The stinging cells of Japanese sea nettles (Chrysaora pacifica) behave like extendable syringes, able to poke out and inject venom into the jellyfish’s prey. The research team raised lobster larvae and jellyfish in the laboratory.

“Lobsters and jellyfish aren’t common in research labs, so we have to find ways to adapt other tools. We have a very Do It Yourself mentality,” says Wakabayashi.

The research team fed lobsters (Ibacus novemdentatus) a meal of only Japanese sea nettle tentacles and then suctioned up the lobsters’ fresh feces. Under the microscope, researchers noticed the feces pellets were wrapped tightly in layers of a peritrophic membrane. These membranes usually allow certain small molecules to travel in both directions, but are apparently strong enough to prevent the stingers from reaching the lobster.

“Based on the contents of their feces, we think that the lobster larvae only digest fluid-type foods, which is vital to know as we develop an artificial food for farmed lobsters to grow efficiently and healthily,” said Wakabayashi.