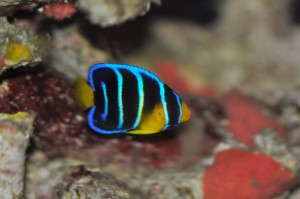 Following Todd’s success with catching a Blue Angelfish (Holacanthus bermudensis), my coworker Phil Argiros was lucky enough to catch another Blue Angel! Although they make their way to Long Island through the gulfstream, it is still very rare to see them here. In fact, it has been several years since the last blue angel siting.

Diving for tropical fish is one of the many perks of my job. To be be able to catch marine creatures and save them from the cold death that awaits them a couple months from now makes my work so rewarding. And I feel such a sense of pride when I later see that fish swimming around an exhibit. 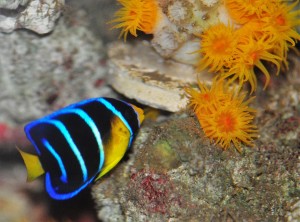 After this little fella made his way through our quarantine system, I placed him in my filter-feeder display tank. He shares this tank with a Firefish goby (Nemateleotris magnifica), a Reef Butterflyfish (Chaetodon sedentarius) that I caught 2 years ago, several colonies of Sun Coral (Tubastrea aurea), a non-photosynthetic gorgonian, and a few dozen sponge colonies.

Some of you might be asking, “But Noel, Angels eat sponges. Why would you do that?” In answer to your question, I keep a large number of sponges in the display for him to pick on. Besides that was part of the plan. In quarantine, the angel was quite picky and we became concerned that it wasn’t eating enough. Now, with multiple sponge colonies for it to choose from, it has begun to fatten up. In addition to feeding on plethora of Porifera, it has also started feeding on LRS (Reef Frenzy)! 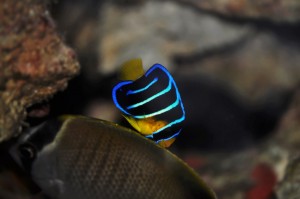 Pictured in the photo to the left is a sight I have never before witnessed in person with this species. This morning when I went to check on the Angelfish – to my surprise and excitement – I found it cleaning the Reef Butterflyfish. As juveniles, many Holocanthus sp. clean larger fish of parasites. They set up cleaning stations much like cleaner wrasses do. However, unlike cleaner wrasses, Blue Angels are quite territorial of their stations

I will be out hunting this week and I hope that there will be more Blue Angels out there to catch. For more information and updates about tropical strays on Long Island, check out my good friend Todd’s posts here.