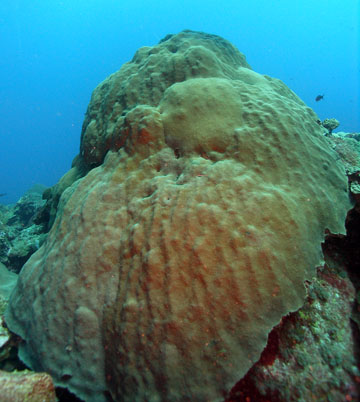 Oil spills cause damage to marine wildlife that lasts well past their immediate aftermath. Marine offspring that must settle and metamorphose to reach adulthood may be particularly prone to harm if the legacy of oil exposure interrupts later transitions across life stages. Following an oil spill on Curaçao, we found that oil-contaminated seawater reduced settlement of 2 coral species by 85% and 40% after exposure had ended. The effect of contamination on settlement was more severe than any direct or latent effects on survival. Latent, sublethal, and behavioral effects on marine organisms—as shown in this study—are not commonly considered during oil-spill impact assessments, increasing the likelihood that harm to marine species goes underestimated or unmeasured.

On August 16, 2012, crude oil was spilled into surface ocean waters near a land-based oil transshipment facility on the southern coast of the Caribbean island of Curaçao. In total, 2.5 km of coastline were directly affected by oiling. The spill occurred during a period of larval production for many shallow-water brooding coral species, such as Agaricia humilis, and 3 wk prior to the mass spawning of a number of broadcasting coral species including Orbicella faveolata, a species recently listed as ‘threatened’ under the US Endangered Species Act. 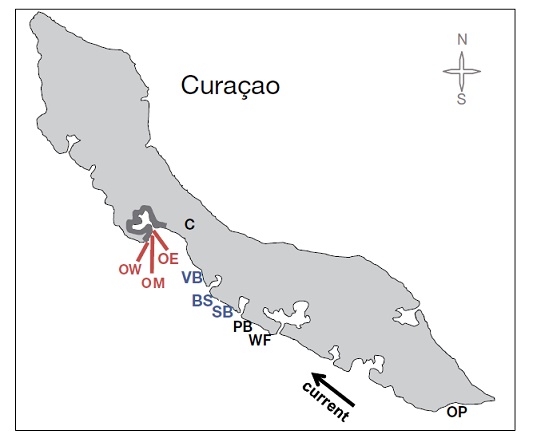 The extent of coastline and inland bay at Jan Kok, Curaçao, that was oiled in August 2012 (dark gray area), the source of crude oil (C), the 6 sites (red: oiled; blue: nonoiled) at which seawater was collected for larval exposure experiments

In the wake of the Curaçao oil spill and 2 days after the spawning of O. faveolata, we conducted 2 experiments to determine whether oil-contaminated surface waters affected survival or settlement of O. faveolata and A. humilis larvae in a direct (during exposure), carry-over (during and after exposure), or latent (only after exposure) manner.

During exposure to seawater from 3 sites within the oil-contaminated region, larvae of the broadcast-spawning Caribbean coral Orbicella faveolata suffered a 10% reduction in survival compared to nonoiled sites. Meanwhile, this species showed no survivorship response across 6 concentrations of laboratory-generated, oil-contaminated seawater during the exposure period.

While the effect of oil contamination on survival reduced coral populations by 25% in Orbicella faveolata and undetectably in Agaricia humilis, inclusion of the effect of oil on total settlement reduced coral densities by 85% and 40%, respectively. Thus, while survival is a commonly used metric to quantify the effects of various toxins, we find that behaviors such as settlement can carry a much stronger signature of toxin exposure encountered earlier in life.