Look at those lovely lips! 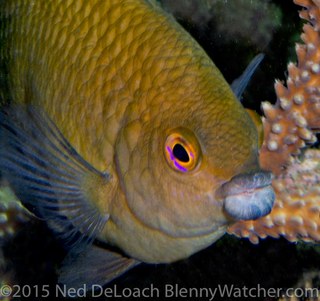 The etymology of Cheliloprion labiatus is the Latin word “labia,” which means “lips” (and yes, the human female genitalia shares the same etymology).

There are two very cool things about this blennywatcher video below.  The first, obviously, is the cartoonish lips on this damselfish.  It’s really something else, isn’t it?  This species uses its giant lips to munch on the tentacles of Acropora polyps (which, aside from its drab colors, is why we never see it the aquarium trade).  The second fascinating aspect of the video is just how perfectly still the cardinalfish are in the video.  They almost appear frozen in space between the Acropora thicket … perhaps in awe of the damselfish’s lips.