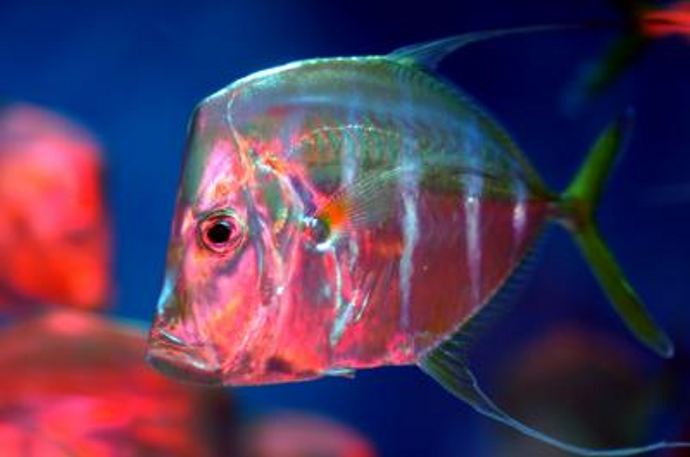 Researchers found that lookdown fish camouflage themselves through a complex manipulation of polarized light after it strikes the fish skin. This kind of camouflage outperforms by up to 80 percent the “mirror” strategy.


Camouflage is of utmost importance to fish, especially in open water where there are no objects to hide in or among. In these instances, many fish use various ways of reflecting light to help minimize predators seeing them. Scientists believed the best method for hiding in open water was using a “mirror” concept, where the fish reflect light as a mirror would underwater. However, recently researchers have found by using Lookdown fish, that certain fish can also manipulate plane polarized light as well making them even more invisible to their predators.

Published this month in the Proceedings of the National Academy of Sciences (PNAS), the journal article Polaro–cryptic mirror of the lookdown as a biological model for open ocean camouflage by Brady, Travisa and others documents the phenomenon. Incidentally, the study was funded by the U.S. Navy, which has a keen interest in learning more about camouflage in open water as it would be useful for ships and submarines.

More than 60 species of fish can see plane polarized light to certain degrees, so the ability to manipulate this type of light is highly desirable if a fish wanted to hide from its predators.

The next goal of the research is to understand how lookdowns manipulate this polarized light field. Is it an automatic process where the fish’s scales and body naturally reflect light in this way or do the fish actually manually manipulate it somehow.

(Via PNAS and EurekAlert)