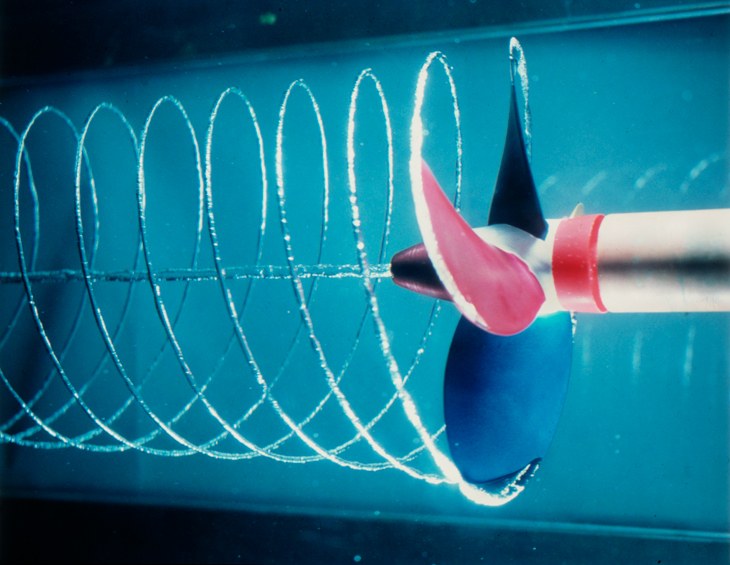 
From the University of Exeter:

Motor-boat noise makes fish bad parents, leading to the death of their babies

Noise from motorboats is making fish become bad parents, and reducing the chance of their young surviving, research led by marine experts at the University of Exeter has shown.

The sound of motorboat engines disturbed coral reef fish so acutely it changed the behaviour of parents, and stopped male fish properly guarding their young, feeding and interacting with their offspring.

The research, which involved playing recordings of natural reef noise or intermittent motorboat noise around 38 fish nests over 12 days, found that the death-rates of baby fish exposed to boat engine noise increased significantly, with six of the 19 boat-noise nests suffering complete mortality.

The University of Exeter led team of marine biologists say that noise from boats is a ‘global pollutant’, distracting fish and making them unable to properly protect their young from predators. They believe motorboat noise should be factored in when trying to protect fish stocks and manage fisheries.

Dr Steve Simpson, an expert of the impact of noise on marine life at the University of Exeter, said: “This study raises important implications for managing the noise of the 100,000s of motorboats used around the world in coral reef environments. We are now considering acoustic quiet zones and corridors, and exploring how engine and propeller development can reduce the impact of this globally prevalent pollutant.”

The University of Exeter researchers predicted that their field research into the effect of man-made noise on coral fish could have wider implications for the survival of other marine species, and even birds and mammals. They called for more research in these areas.

Dr Sophie Nedelec, of the College of Life and Environmental Sciences at the University of Exeter, said she believed other species could be similarly affected by marine noise pollution.

“Parental care is widespread in the animal kingdom; from blue tits to blue whales, so there could be big implications for populations of animals affected by noise,” she said.

Noise from boats and has already been shown to affect the way fish, mammals, birds and invertebrates behave. It can force them to change their habitat to get away from the noise and reduce their success finding a mate. Boat noise can travel for many kilometres underwater.

This new research, carried out by the University of Exeter, University of Bristol, James Cook University, Queensland, Australia, and the Australian Institute of Marine Science, showed motorboat noise can increase death rates among juvenile fish.

Dr Nedelec, lead author on the paper published in Proceedings of the Royal Society B journal, added: “Parental care behaviour seems to be impaired in noisy conditions and we believe this makes it easier for predators to strike their offspring. It is likely the parents were either stressed or distracted by the noise, giving an advantage to the predators in this case.”

The researchers made observations for 12 days of 38 natural nests with broods of young in the Great Barrier Reef in Australia. It found that exposure to recordings of noise from motorboats, compared to ambient sounds, had a noticeable impact on the survival of baby coral reef fish, and the behaviour of adult male fish.

Motorboat noise is the most common source of man-made noise in shallow reef environments. The University of Exeter scientists warned that, because they broadcast the motorboat engine noise through underwater loudspeakers which do not broadcast the full range of sounds produced by motorboats, their results could be conservative.

The males and female spiny chromis, a coral reef fish which lives in the tropical Western Pacific, bring up their offspring together, with males contributing more care than females of the species.

Fish exposed to the motorboat noise spent far more time chasing and making aggressive strikes at other fish, compared to males exposed to recordings of ambient sound. The scientists believe this increase in aggressive behaviour may have been be due to ‘heightened stress’, or distraction by the noise which led to decision-making errors, so the fish attacked or chased fish that were not a predatory threat.

The greater time spent “chasing inappropriate species at inappropriate times” also meant father fish spent less time near the nest, which may have left their offspring vulnerable to attacks from predators.

Adult fish exposed to the motorboat noise also spent less time feeding, which would have been likely to reduce their physical condition.

Another coral reef fish, the longear sunfish, was observed to move away from their nest when a slow-moving motorboat was nearby. Predators that have located a nest they can feed from are likely to return to hunt.

Other studies have shown that spawning could be interrupted by the approach of a fast moving powerboat.

Professor Andy Radford, University of Bristol, said: “Experiments that measure survival in natural conditions – as we have done in this study – are crucial if we are to understand fully the impact of anthropogenic noise.”

The research is published on June 7th in Proceedings of the Royal Society B Journal.